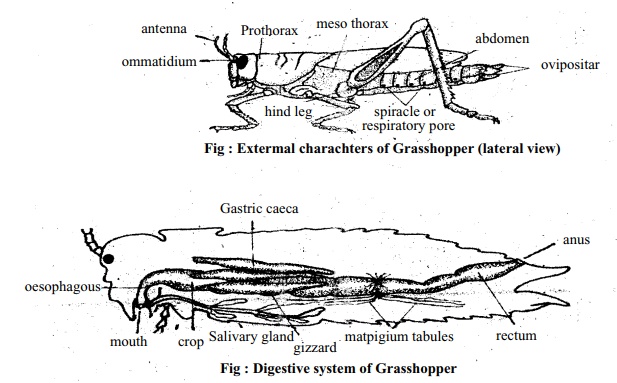 Grasshopper is an invertebrate animal. It belongs to the phylum Arthropoda and class Insecta. The characteristics of grasshopper are like other insects.

Grasshopper is an invertebrate animal. It belongs to the phylum Arthropoda and class Insecta. The characteristics of grasshopper are like other insects. Grasshopper lives all over the world in grassland and leafy vegetation. They feed on grass and leaf. Some kinds of grasshoppers are known as locusts.

1.   Grasshopper's body is narrow, elongated, tubular and somewhat compressed laterally. It is about 8 cm in length.

2.   Its body is yellowish gray that enables them to resemble the environment in which they live.

3.  Entire body is covered by a hard cuticle or integument, cuticle is divided into a definite number of segments.

4.  The body of Grasshopper is divided into head, thorax and abdomen.

A. Head: The head is big and somewhat triangular. There is a pair of largecompound eyes and a pair of antenna on the head. At the anterior end of head there is a mouth opening. Surrounding the mouth opening there are some mouth appendages.

B. Thorax: There are three pairs of segmented legs on the ventral side and twopairs of elongated wings on the dorsal side. The fore wings are a bit thicker and the hind wings are broad and membranous.

Digestive System of Grasshopper: As grasshopper is an invertebrateanimal it is dissected from the dorsal side. The digestive system consists of:

a. Fore Gut: There are four parts of fore gut, e.g.

i.         Mouth Opening: At the anterior end of fore gut there is a mouth openingthrough which food enters. Around the mouth opening, there are mouth appendages.

ii.          Pharynx: It is smaller in size and located just behind the mouth opening.

iii.             Oesophagus: First part of oesophagus is narrow and the hind portion beingexpanded to form sac-like structure known as crop. Here the food is partially digested and stored.

iv.             Gizzard: Posterior to the crop, is gizzard. It is thick walled, muscular andmore or less cone shaped. Gizzard grinds and crushes the food.

b. Mid Gut or Mesenteron: The next part behind the gizzard is mid gut orstomach. It is large wide sac where food is digested. At the junction of gizzard and stomach a number of gastric caeca are present. This caeca open into the mid gut and secrete enzymes.

c. Hind Gut: The hind portion of the gut is known as hind gut. It has two region, e.g.

i. Ileum or Small Intestine: It is tubular portion. Absorption of digested foodoccurs here.

2. Salivary Glands: Closely associated with the oesophagus and crop, there area pair of small branched salivary glands which secrete saliva and open to the buccal cavity.

1.  Taking the grasshopper on the dissection tray, head and the last end of abdomen are to be stuck with pins.

2.  The dorsal side has to be kept upward.

3.  It is to be dissected along the dorsal mid line with scissors or sharp blade from back to the front.

4.  Then the digestive system is to be observed carefully with the help of a forceps.