Home | | Biology | Examples of Animals taken from each of the major Phyla, their identifying Characters, Observations and Figures
Posted On :  30.06.2017 10:37 am

Examples of Animals taken from each of the major Phyla, their identifying Characters, Observations and Figures

Examples of Animals taken from each of the major Phyla, their identifying Characters, Observations and Figures.

2.        It always changes its shape by projecting pseuopodia. 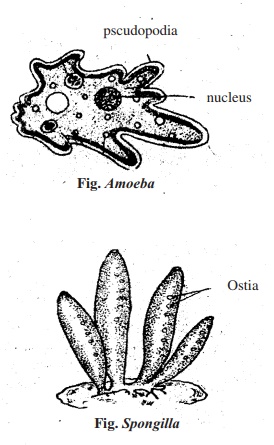 1.   Its body wall is provided with numerous pores known as ostia.

2.        The adult animal remains attached permanently with some object.

3.  There are various types of canal system in its body.

1.    It has a long body. At the anterior end of , the body, there is a hypostome. Hypostome bears an opening and tentacles at its base. Opposite to hypostome is basal disc.

2.      There is only one cavity in the bodyknown as coelenteron.

3.   All the cells of the body are arranged in two layers, namely: ectoderm and endoderm. Mesoglea Presents in between the layers.

4.        Specialized nematocysts originate in the ectoderm. It helps to catch the pray. 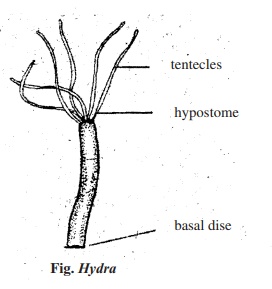 2.   Sucker present on the ventral side and at the anterior end of the body. 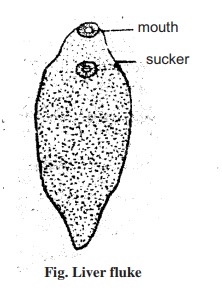 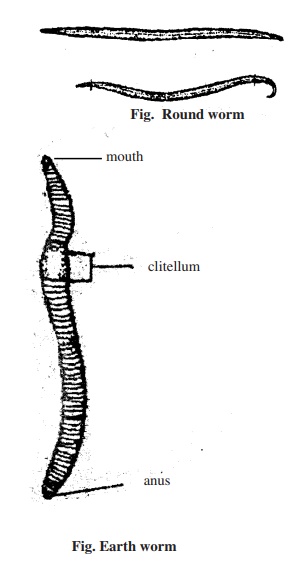 1.   Body is cylindrical and segmented.

2.   In the middle of each segments fine setae are present.

3. Carapace is extended forward as a saw like rostrum.

4. Stocked compound eyes. on each side of head are present.

1.  The soft body is covered by a shell.

3.  The shell is spirally coiled with pointed tip. 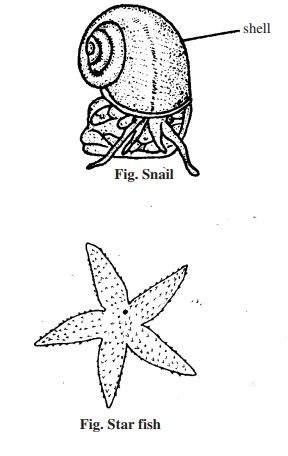 1.  The body is star shaped with five arms Integument is spiny.

2.  There are four gills, covered by operculum.

4.  The lateral line is conspicuous.

5.  One pair each of pectoral and pelvic fins and unpaired dorsal, ventral and caudal fin are Present

6.  Body is divided into head, trunk and tail. 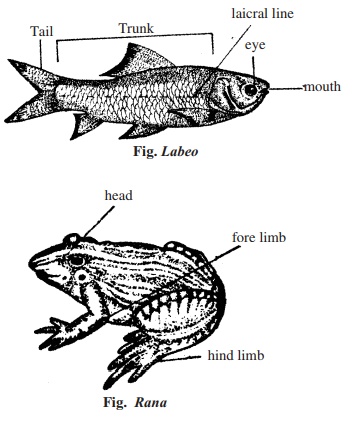 1.  Body is covered by smooth integument and black-yellowish strips are present.

3.  On the two sides of the head there are a pair of eyes a pair of narial aperture and a pair of auditory aperture.

4.  Two pairs of legs are present in the trunk region. Each leg has five fin:

3. Hard beak and two legs with claws are present.

4. In the wings there are long feathers. 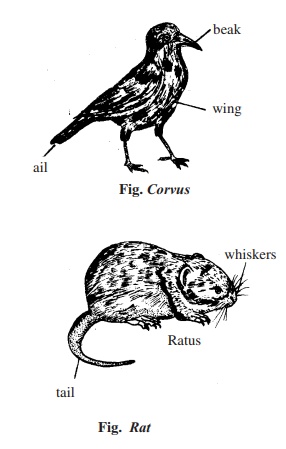 1. Size of the mammal is small.

2. The tail is longer in proportion to  the body; the two ears are small  and remain erected.

3. The body is covered by hairs.

4. There are teeth in the jaws.

5. Whiskers present in the nasal region.