The body of Taki is elongated and bilaterally symmetrical. They are 12 cm to 20 cm in length; the whole body is covered by scales arranged like tiles of the roof of the houses.

In Bangladesh Lata fish lives in rivers, canal, jheel-beels, ponds and different water bodies. It likes stagnant water. They prefer to live in confined water. They are carnivorous. The body of Taki is elongated and bilaterally symmetrical. They are 12 cm to 20 cm in length; the whole body is covered by scales arranged like tiles of the roof of the houses. Their body is wet and slimmy due to secretion of mucus from the skin. The dorsal part is blackish where the ventral side yellowish grey in colour. The body of the fish is divided into three parts, namely:

1. Head: The head of this fish looks more or less like that of a snake. The headextends from the anterior end of the body up to the operculum.

The head is compressed dorso-ventrally. The mouth is semi lunar in shape and covered by upper and lower jaws. The jaws have smaller teeth. Behind the upper jaw, a pair of external narial aperture is present and a bit behind these apertures, on every side, there is one eye which is without eyeled. The eye is covered with a thin membrane.

3. Tail: From behind the anus the rest of the body is the tail. Covering the terminal end of the body there is a fan shaped fin. This is called caudal fin. From behind the back of head up to the tail there are two dark lines on the lateral sides of the body, known as lateral line organ.

The digestive system consists of; 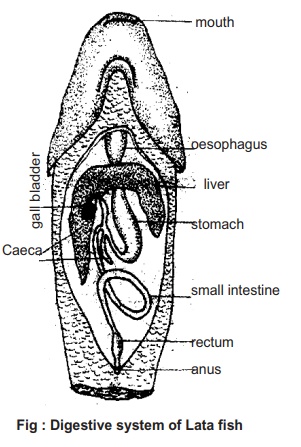 Mouth: On the anterior end of the fish, there is semilunar shaped mouthbounded by the upper and lower jaw. The jaws have teeth. Mouth follows the buccal cavity.

Buccal Cavity: Behind the mouth opening there is buccal cavity. On the floorthere lies the tongue.

Pharynx: Buccal cavity is connected with pharynx from behind. There arefloor in two sides of the pharynx:

Oesophagus: Next to pharynx is the oesophagus, which is short, narrow andtubular. It opens into the stomach.

Stomach: It is fairly large. The anterior end is called cardiac end and posteriorend connected with intestine is pyloric end.

Intestine: It is tubular and coiled.

Rectum and Anus: The last portion of intestine is a bit wider and sac like.known as rectum where the faeces remain stored. Behind the pelvic fin, there is an aperture known as anus. Faeces are expelled through this aperture.

Liver: The liver of Lata fish is big, grayish in colour an devided into two Partswith a gall bladder in between. There is no pancreas in Lata fish.

Method of Dissection and Observation of Lata Fish:

1.   Put a dead Lata fish on the dissection tray keeping the ventral side upward.

2.   Inserting two large and hard pins fix the fish in the wax.

5.   Now remove the body wall of the belly and examine the digestive system of the fish and try to find out the regions shown in the labelled diagram.