The circuit of a three-phase, three-wire ac regulator (termed as ac to ac voltage converter) with balanced resistive (star-connected) load is shown in Fig.

The circuit of a three-phase, three-wire ac regulator (termed as ac to ac voltage converter) with balanced resistive (star-connected) load is shown in Fig. 27.1. It may be noted that the resistance connected in all three phases are equal. Two thyristors connected back to back are used per phase, thus needing a total of six thyristors. Please note the numbering scheme, which is same as that used in a three-phase full-wave bridge converter or inverter, described in module 2 or 5. The thyristors are fired in sequence (Fig. 27.2), starting from 1 in ascending order, with the angle between the triggering of thyristors 1 & 2 being (one-sixth of the time period (°60T) of a complete cycle). The line frequency is 50 Hz, with fT/1==20 ms. The thyristors are fired or triggered after a delay of α from the natural commutation point. The natural commutation point is the starting of a cycle with period, (6/60T=°) of output voltage waveform, if six thyristors are replaced by diodes. Note that the output voltage is similar to phase-controlled waveform for a converter, with the difference that it is an ac waveform in this case. The current flow is bidirectional, with the current in one direction in the positive half, and then, in other (opposite) direction in the negative half. So, two thyristors connected back to back are needed in each phase. The turning off of a thyristor occurs, if its current falls to zero. To turn the thyristor on, the anode voltage must be higher that the cathode voltage, and also, a triggering signal must be applied at its gate. 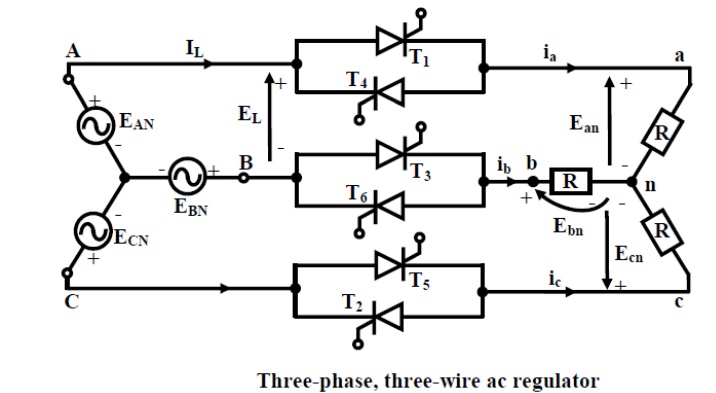 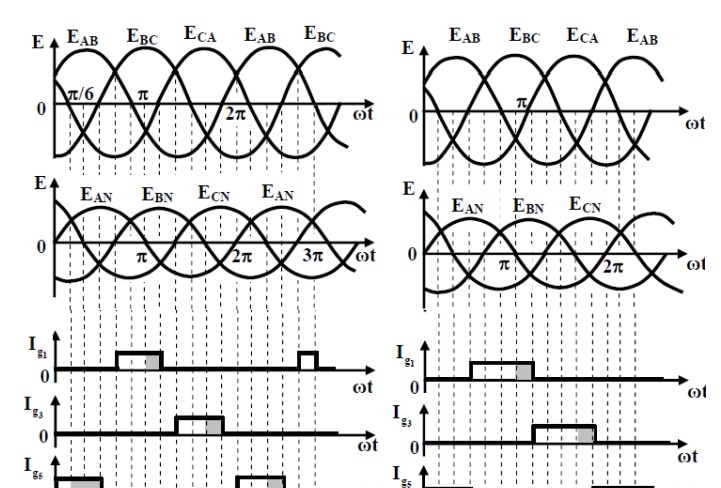 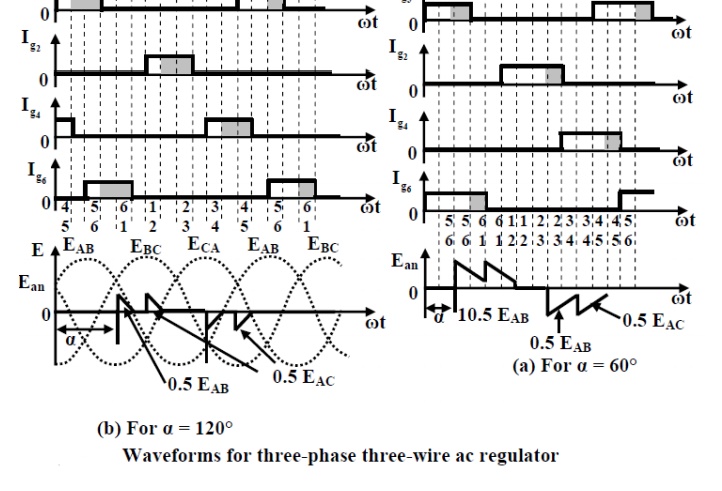 The waveforms of the input voltages, the conduction angles of thyristors and the output voltage of one phase, for firing delay angles (α) of (a) and (b) are shown in Fig. 27.2. For °60°120)6/(600πα°≤≤°, immediately before triggering of thyristor 1, two thyristors (5 & 6) conduct. Once thyristor 1 is triggered, three thyristors (1, 5 & 6) conduct. As stated earlier, a thyristor turns off, when the current through it goes to zero. The conditions alternate between two and three conducting thyristors.