In this circuit as there is one single common cathode point, routing of the gate trigger pulses to the thyristor gates of T1 and T2 is simpler and only one isolation circuit is required. 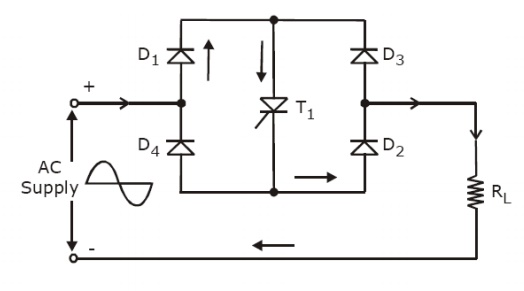 A single phase full wave ac controller can also be implemented with one thyristor and four diodes connected in a full wave bridge configuration as shown in the above figure. The our diodes ct as a bridge full wave rectifier. The voltage across the tyristor T1 and current through thyristor T1 are always unidirectional. When T1 is triggered at ωt=a, during the positive half cycle (0<=a<= π), the load current lows through D1, T1, diode D2 and  through the load. With a resistive load, the thyristor current (lowing through the ON thyristor T1), the load current falls to zero at ωt= π, when the input supply voltage decreases to zero at ωt= π, the thyristor naturally turns OFF.

In the negative half cycle, diode D3 & D4 are forward biased during ωt=  π to 2 π radians. When T1 is triggered at ωt= (π+a), the load current flows in the opposite direction (upward direction) through the load , through D3, T1 and D4. Thus D3, D4 and T1 conduct together during the negative half cycle to supply the load power. When the input supply voltage becomes zero at ωt= 2 π , the thyristor current (load current) falls to zero at ωt= 2 π and the thyristor T1 naturally turns OFF. The waveforms and the expression for the RMS output voltage are the same as discussed earlier for the single phase full wave ac controller.

But however if there is a large inductance in the load circuit, thyristor T1 may not be turned OFF at the zero crossing points, in every half cycle of input voltage and this may result in a loss of output control. This would require detection of the zero crossing of the load current waveorm in order to ensure guaranteed turn of of the conducting thyristor before triggering the thyristor in the next half cycle, do that we gain control on the output voltage.

In this full wave ac controller circuit using a single thyristor, as there are three power devices conducting together at the same time there is more conduction voltage drop and an increase in the ON state conduction losses and hence efficiency is also reduced.

The diode bridge rectifier and thyristor (or a power transistor) act together as a bidirectional switch which is commercially available as a single device module and it has relatively low ON state conduction loss. It can be used or bidirectional load current control and or controlling the RMS ouput voltage.

A single phase full wave ac voltage controller circuit (bidirectional controller) with an RL load using two thyristors T1 and T2 (T1 and T2 are two SCRs) connected in parallel is shown in the figure below. In place of two thyristors a single Triac can be used to implement a full wave ac controller, if a suitable Traic is available for the desired RMS load current and the RMS output voltage rating. 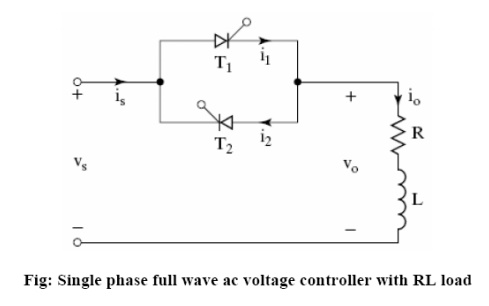 Due to the inductance in the load, the load current io, flowing through T1 would not fall to zero at ωt= π , when the input supply voltage starts to become negative.

The thyristor T1 conducts from ωt= a to β. The conduction angle of T1 is δ = (β - a), which depends on the delay angle a and the load impedance angle ϕ. The waveforms of the input supply voltage, the gate trigger pulse of T1 and T2 , the thyristor current, the load current and load voltage waveforms appear as shown in the figure below. 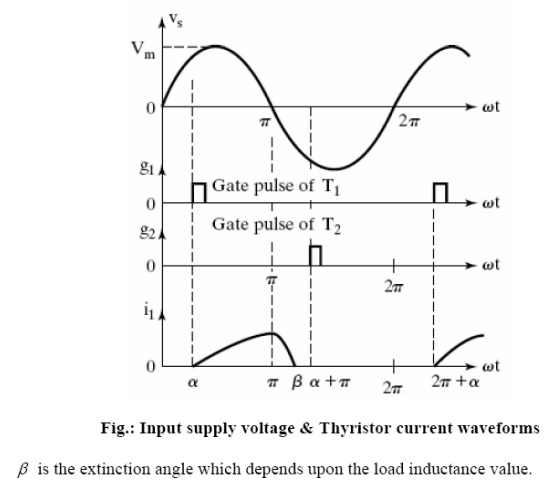 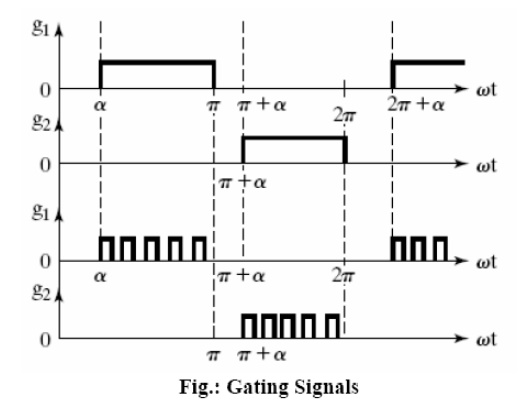