Cycloconverters produce harmonic rich output voltages, which will be discussed in the following sections. When cycloconverters are used to run an ac machine, the leakage inductance of the machine filters most of the higher frequency harmonics and reduces the magnitudes of the lower order harmonics. 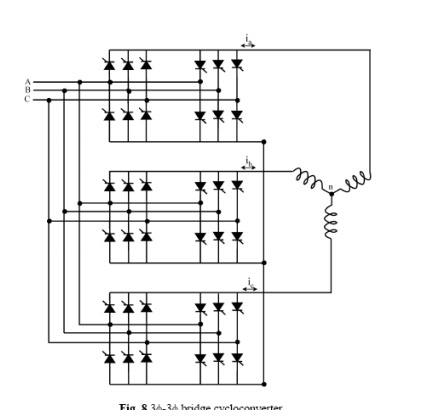 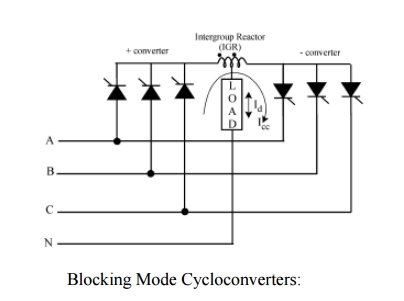 The operation of these cycloconverters was explained briefly before. They do not let circulating current flow, and therefore they do not need a bulky IGR. When the current goes to zero, both positive and negative converters are blocked. The converters stay off for a short delay time to assure that the load current ceases. Then, depending on the polarity, one of the converters is enabled. With each zero crossing of the current, the converter, which was disabled before the zero crossing, is enabled. A toggle flip-flop, which toggles when the current goes to zero, can be used for this purpose. The operation waveforms for a three-pulse blocking mode cycloconverter are given in Fig.

The blocking mode operation has some advantages and disadvantages over the circulating mode operation. During the delay time, the current stays at zero distorting the voltage and current waveforms. This distortion means complex harmonics patterns compared to the circulating mode cycloconverters. In addition to this, the current reversal problem brings more control complexity. However, no bulky IGRs are used, so the size and cost is less than that of the circulating current case. Another advantage is that only one converter is in conduction at all times rather than two. This means less losses and higher efficiency. 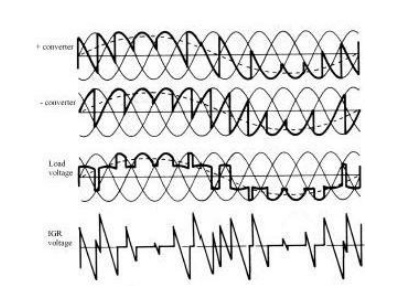 The voltage waveform across the IGR can be seen in Fig. 11d. This is the difference of the instantaneous output voltages produced by the two converters. Note that it is zero when both of the converters produce the same instantaneous voltage. The center tap voltage of IGR is the voltage applied to the load and it is the mean of the voltages applied to the ends of IGR, thus the load voltage ripple is reduced.

The circulating current cycloconverter applies a smoother load voltage with less harmonics compared to the blocking mode case. Moreover, the control is simple because there is no current reversal problem. However, the bulky IGR is a big disadvantage for this converter. In addition to this, the number of devices conducting at any time is twice that of the blocking mode converter. Due to these disadvantages, this cycloconverter is not attractive. 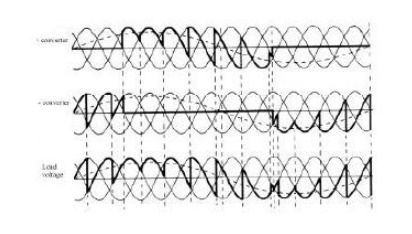