A thread is the basic unit of CPU utilization.

ü    A thread is the basic unit of CPU utilization.

ü    It is sometimes called as a lightweight process.

ü    It consists of a thread ID, a program counter, a register set and a stack.

ü It shares with other threads belonging to the same process its code section, data section, and resources such as open files and signals.

ü   A traditional or heavy weight process has a single thread of control.

ü   If the process has multiple threads of control, it can do more than one task at a time. 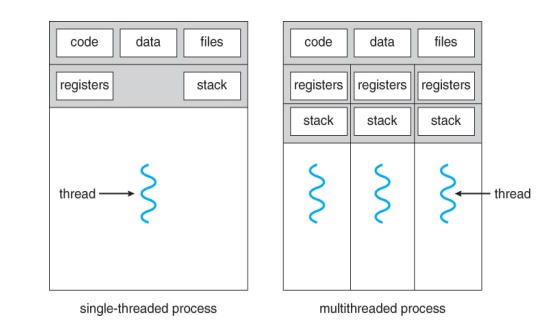 ·        Supported above the kernel and implemented by a thread library at  the user level.

·        Thread creation , management and scheduling are done in user space.

·        When a user thread performs a blocking system call ,it will cause the entire process to block even if other threads are available to run within the application.

·        Thread creation , management and scheduling are done in kernel space.

·        When a kernel thread performs a blocking system call ,the kernel schedules another thread in the application for execution.

A recent trend in computer architecture is to produce chips with multiple cores, or CPUs on a single chip.

A multi-threaded application running on a traditional single-core chip would have to interleave the threads.

On a multi-core chip, however, the threads could be spread across the available cores, allowing true parallel processing.

Concurrent execution on a single-core system.

ü As multi-threading becomes more pervasive and more important (thousands instead of tens of threads), CPUs have been developed to support more simultaneous threads per core in hardware.

1.     Identifying tasks - Examining applications to find activities that can be performed concurrently.

3.     Data splitting - To prevent the threads from interfering with one another.

4.     Data dependency - If one task is dependent upon the results of another, then the tasks need to be synchronized to assure access in the proper order.

5.     Testing and debugging - Inherently more difficult in parallel processing situations, as the race conditions become much more complex and difficult to identify.

       In theory there are two different ways to parallelize the workload: 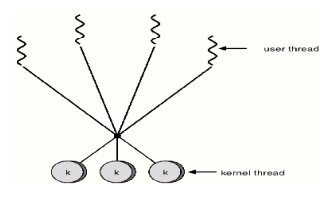 1.       Data parallelism divides the data up amongst multiple cores ( threads ), and performs the same task  on each subset of the data. For example dividing a large image up into pieces and performing the same digital image processing on each piece on different cores.

2.       Task parallelism divides the different tasks to be  performed among the different cores and performs them simultaneously.

       In practice no program is ever divided up solely by one or the other of these, but instead by some sort of hybrid combination.

       Used on systems that do not support kernel threads. 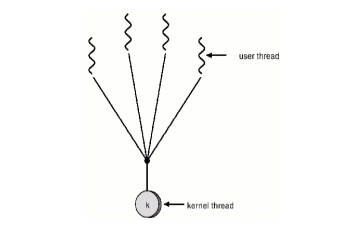  Each user-level thread maps to a kernel thread.

ü Allows many user level threads to be mapped to many kernel threads.

ü Allows the operating system to create a sufficient number of kernel threads.