The hardware solutions presented above are often difficult for ordinary programmers to access, particularly on multi-processor machines, and particularly because they are often platform-dependent.

ü The hardware solutions presented above are often difficult for ordinary programmers to access, particularly on multi-processor machines, and particularly because they are often platform-dependent.

ü The terminology when using mutexes is to acquire a lock prior to entering a critical section, and to release it when exiting. 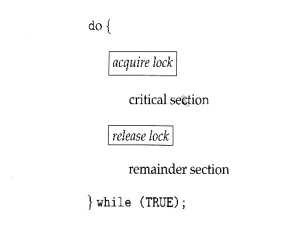 ü Just as with hardware locks, the acquire step will block the process if the lock is in use by another process, and both the acquire and release operations are atomic.

ü Acquire and release can be implemented as shown here, based on a boolean variable "available": 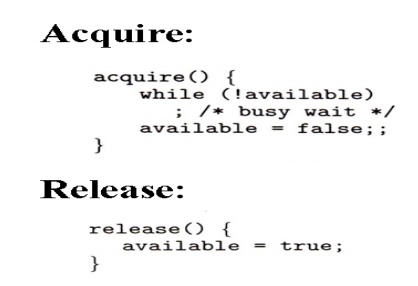 ü One problem with the implementation shown here, ( and in the hardware solutions presented earlier ), is the busy loop used to block processes in the acquire phase. These types of locks are referred to as spinlocks, because the CPU just sits and spins while blocking the process.

ü Spinlocks are wasteful of cpu cycles, and are a really bad idea on single-cpu single-threaded machines, because the spinlock blocks the entire computer, and doesn't allow any other process to release the lock. ( Until the scheduler kicks the spinning process off of the cpu. )

ü On the other hand, spinlocks do not incur the overhead of a context switch, so they are effectively used on multi-threaded machines when it is expected that the lock will be released after a short time.