Approximately 4% to 5% of pregnancies are complicated by vaginal bleeding in the third trimester.

Approximately 4% to 5% of pregnancies are com plicated by vaginal bleeding in the third trimester.

Bleeding ranges from spotting to life-threatening hemorrhage. Intercourse and recent pelvic examinations are common precipitants of spotting, as the cervix is more vascular and friable in pregnancy. Twenty percent of car-diac output is shunted to the pregnant uterus, so significant bleeding can be quickly catastrophic. Severe hemorrhage is much less common than spotting, but remains a leading cause of maternal and fetal morbidity and mortality. Thetwo most common causes of significant bleeding are placenta previa (in which the placenta is located close to or over the cervical os) and placental abruption (premature separation of the placenta). Other important causes of bleeding are preterm cervical change, preterm labor, and uterine rupture. In many cases, bleeding remains unexplained or is attributed to local lesions. Possible causes of third-trimester bleeding are listed in Box 21.1. 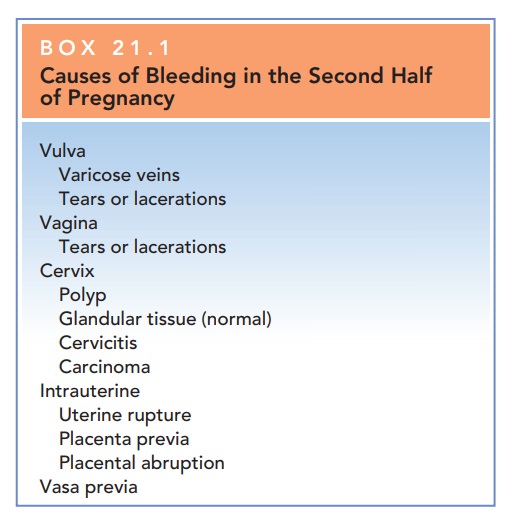 A focused but comprehensive history and physical exam are crucial in assessing obstetric bleeding once the patient is stable and a reassuring fetal heart rate pattern is confirmed. While diagnosis is rarely based solely on his-tory, a differential diagnosis is usually possible after perti-nent information has been gathered. It is always important to quantify bleeding and associated symptoms, such as abdominal pain. A personal or family history of bleeding with procedures may lead to a diagnosis of a bleeding dis-order, whereas a history of cervical dysplasia and no recent pap tests would be worrisome for cervical cancer. It is also important to consider other origins of bleeding, such as hemorrhoids or bladder disorders.

A physical examination should always begin with vital signs. The fetal heart rate should be auscultated either by Doppler or electronic fetal monitor. A general review of respiratory and cardiovascular systems is warranted in all patients. Intravenous access should be established if the bleeding is heavy, estimated blood loss is significant, or the patient is unstable. A brief inspection for petechiae or bruising may be indicated if there is suspicion of a bleed-ing disorder. Particular attention should be paid to the abdomen and pelvis.

Pelvic examination should not be undertaken until placental position is confirmed, as this could cause significant bleeding in a patient with placenta previa.

Careful inspection of the vulva should be followed by a speculum examination of the vagina and cervix.

A common finding in pregnancy is a significant ectro-pion of the cervix, particularly among women with a his-tory of using oral contraceptives. The ectropion is an area on the ectocervix where columnar epithelium has been exposed to vaginal acidity due to eversion of the endocervix. The ectropion may appear reddened and “raw looking.” These findings may raise concerns about cancer, but they are actually benign.

Significant bleeding requires immediate management, including ongoing monitoring of vital signs and two large bore intravenous lines for administration of crystalloid fluid. Blood studies should include complete blood count, coagulation profile, and a type and cross match for 4 units. Regardless of the amount of bleeding, blood type and screen are necessary. Patients who are Rh D-negative may requireimmunoglobulin to protect against the Rh D antigen and a Kleihauer-Betke test or other test to determine feto—maternalbleeding should be performed to determine the amount of immunoglobulin needed once the bleeding has been controlled. Staff should be ready for deliv-ery. Most likely, this will require an emergency caesarean delivery and, possibly, a general anesthetic. If the bleeding is not sufficient to warrant emergency delivery and/or the fetus is preterm, then blood studies should be continued and intervenous access maintained. An ultrasound examination should be performed to assess placental location and condi-tion of the fetus. The patient should be admitted to the hos-pital to allow for close monitoring.

Causes of Bleeding in the Second Half of Pregnancy