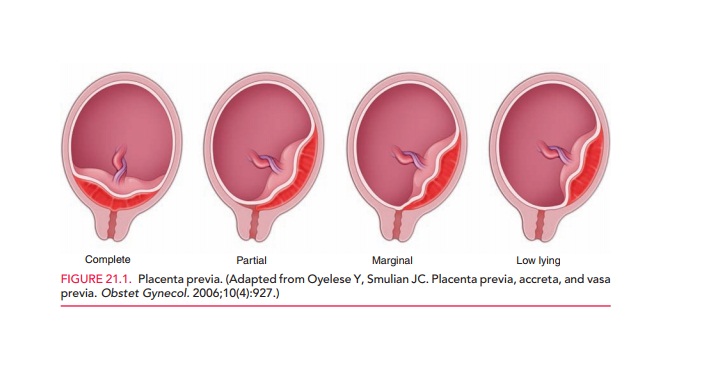 Placenta previa is a placental location close to or over the internal cervical os.

Placenta previa is a placental location close to or over the inter-nal cervical os. It can be classified ascomplete,in which theplacenta completely covers the internal os, or partial, in which the placenta overlies part but not all of the internal os. A placenta that extends into the lower uterine segment but does not reach the internal os is called a low-lyingplacenta. (Fig. 21.1.)

Complete placenta previa rarely resolves sponta-neously, but partial and low-lying placenta previa will often resolve by 32 to 35 weeks of gestation. The mech-anism does not involve an upward “migration” of the placenta, but rather a stretching and thinning of the lower uterine segment, which effectively moves the pla-centa away from the os.

Transvaginal ultrasonography is more accurate indiagnosing placenta previa than abdominal ultrasonogra-phy, which gives many false-positive results, particularly when the placenta is located posteriorly (Fig. 21.2). The etiology of placenta previa is not known; however, it may be associated with abnormal vascularization. Risk factors for placenta previa include placenta previa in a prior preg-nancy (4% to 8% recurrence), prior cesarean delivery or other uterine surgery, multiparity, advanced maternal age, cocaine use, and smoking. Placenta previa has been associ-ated with an increase in fetal anomalies, although the pre-cise mechanism is unclear. These anomalies include severe cardiovascular, central nervous system, gastrointestinal, and respiratory abnormalities. 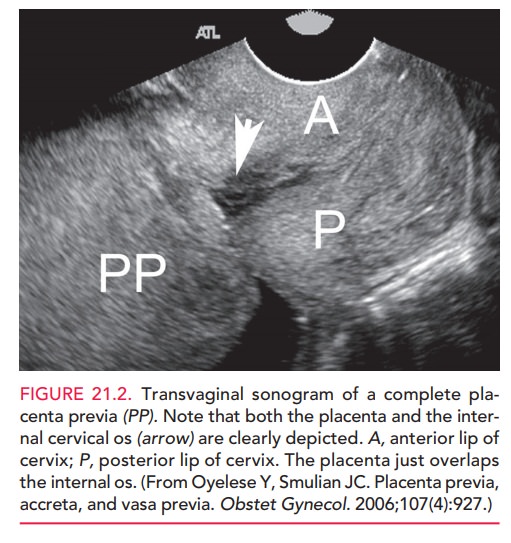 Bleeding usually ceases in 1 to 2 hours. Close observa-tion, fluid administration, bed rest, and administration of steroids for fetal lung maturity may be appropriate if the fetus is premature and the bleeding is not heavy enough to warrant immediate delivery. The bleeding is usually pain-less, except when it is associated with labor or abruption (the premature separation of the placenta; see Table 21.1 for a comparison of placenta previa and placental abrup-tion). For patients in a stable condition, outpatient managementmay be considered if the patient is compliant, lives close to the hos-pital, and has someone with her at all times. If the bleeding issevere or the fetus is at term, then delivery is appropriate. 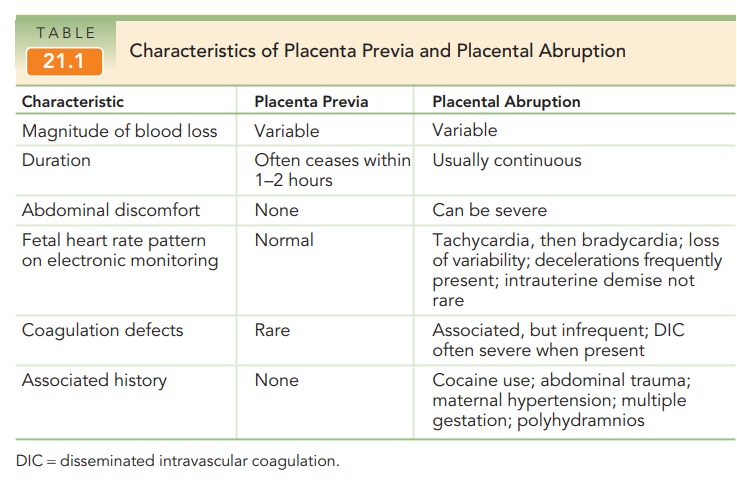 Placenta previa is associated with an increase in preterm birth and perinatal mortality and morbidity. Delivery is most often via caesarean birth. In a patient whose condi-tion is stable, caesarean delivery can be undertaken at 36 to 37 weeks of gestation, following amniocentesis to confirm fetal lung maturity. If lung maturity is not demonstrated, the patient should be delivered at 37 to 38 weeks of gestation. Earlier caesarean delivery may be required if bleeding occurs or if the patient goes into labor. The number of bleeding episodes is unrelated to the degree of placenta previa or to fetal outcome.

Complications of placenta previa also include increased bleeding from the lower uterine segment where the pla-centa was attached at the time of cesarean delivery. The pla-centa may also be abnormally adherent to the uterine wall. This is termed placenta accreta if the placental tissue extends into the superficial layer of the myometrium, pla-centa increta if it extends further into the myometrium, or placenta percreta if it extends completely through themyometrium to the serosa, and sometimes into adjacent organs such as the bladder. The incidence of placenta accreta is about 1 in 2500 deliveries, but increases in patients with a history of cesarean delivery. The risk of requiring hys-terectomy following a caesarean delivery for patients with placenta previa is increased, which in turn increases the risk of maternal and perinatal morbidity and mortality.