The digestive system and The process of digestion 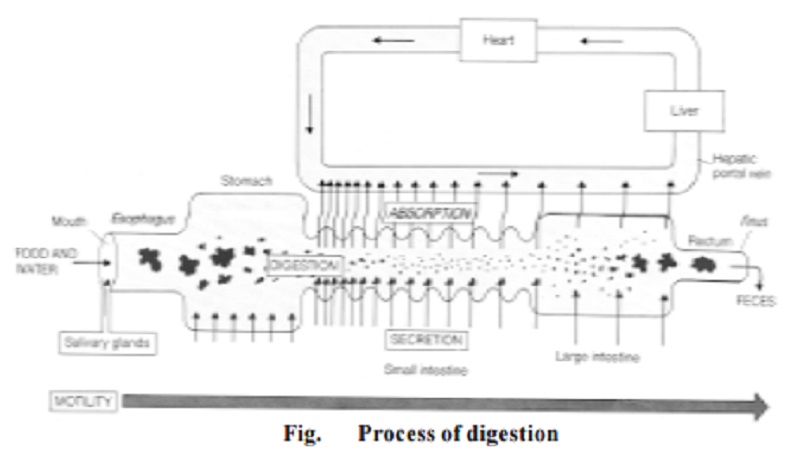 The digestive system includes the gastro-intestinal tract (mouth to anus) and the glandular organs. This system serves to transfer organic molecules, salts and water from the external environment to the body's internal environment. Most of the food taken into the mouth are large particles containing macromolecules such as polysaccharides and proteins.

The digestive system includes the gastro-intestinal tract (mouth to anus) and the glandular organs. This system serves to transfer organic molecules, salts and water from the external environment to the body's internal environment. Most of the food taken into the mouth are large particles containing macromolecules such as polysaccharides and proteins. As such they cannot be absorbed by the intestinal wall. They must be dissolved and broken down into much smaller molecules. This process is named as digestion. Digestion is accomplished by substances called enzymes produced from the digestive glands. The enzymes are biocatalysts in the food breakdown process.

The process of digestion

Mouth :- In the mouth, digestion starts with chewing. It breaks up large pieces of food into smaller particles that can be swallowed without choking. It is accomplished by teeth, tongue, jaws and saliva.

Chewing is controlled by the somatic nerves to the skeletal muscles of the mouth and jaw. Rhythmic chewing motions are reflexly activated by the pressure of food against the gums, hard palate at the roof of the mouth and tongue.

Saliva :- The saliva is secreted by three pairs of exocrine glands, namely : the parotid, the submandibular and the sublingual. The daily secretion of sa-liva ranges from 1000 to 1500ml. It contains the organic substances amylase and mucin. The salivary amylase or ptyalin can act on starch. It converts cooked starch into the disaccharide, maltose. Mucin is a glycoprotein. It helps in the lubrication of food. The lubricated, swallowable form of food is called thebolus. The salivary secretion is controlled by reflex activities.

Swallowing :- It is a complex reflex activity. It is controlled by the swallowing center in the medulla oblongata. During swallowing the soft palate is elevated, the larynx gets raised. The tongue forces the food back into the pharynx, the epiglottis closes the glottis and the food slowly passes into the oesophagus.

It is a wide chamber, located below the diaphragm. The size and shape of the stomach depends on the food inside it. The stomach volume during feeding may increase upto 1.5 lit. Stomach's primary contractile action will produce peristaltic waves. Each wave begins in the body of the stomach and proceeds towards the pyloric region. The initial wave influences the muscles to close the pyloric sphincter, a ring of smooth muscles between the stomach and the duodenum.

The inner wall of the stomach is lined with gastric glands. There are nearly 40 million glands engaged in producing gastric juice. The chief cells of the lining of stomach secrete enzymes and the parietal cells (Oxyntic cells) produce HCl to create acidic medium for enzymes.

The enzymes of the stomach are the pepsin and rennin. Pepsin is secreted in an inactive precursor form known as pepsinogen. The activity due to HCl converts pepsinogen into pepsin. Pepsin hydrolyses the proteins into short polypeptide chains and peptones. It is most effective in an acidic environment.

Rennin acts on soluble milk protein caesinogen and converts it into insoluble casein. In the presence of calcium ions casein is precipitated as insoluble calcium-casein compound (curds).

Repeated peristaltic waves in the stomach help to soften the food. The frequency of contraction is determined by the basic electrical rhythm and remains essentially constant. It is also aided by neural and hormonal influences. The food leaves the stomach in the form of chyme and enters the upper small intestine at periodic intervals.

The small intestine :- It is about 5-7 metres long. It is divided into three segments namely the initial short segment the duodenum, the jejunum and the longest segment the ileum.

The food in the small intestine is mixed with three juices namely bile juice, pancreatic juice and intestinal juice.

Bile juice :- It is a brownish green, alkaline secretion of the liver. It is stored in the gall bladder and poured into the duodenum via the bile duct. The bile contains water, mucus, inorganic salts, cholesterol and bile salts. The bile salts emulsify fats and help enzymes like lipase to act upon fats. During emulsification, the bile salts convert bigger fat particles into smaller fat globules.

Pancreatic juice :- It is an alkaline fluid (pH 7 to 8). It is transported to the duodenum through the pancreatic duct. It contains water, mineral salts and a variety of enzymes like : trypsin, chymotrypsin which are secreted in the form of inactive precursors trypsinogen and chymotrypsinogen. The precursors are activated by enterokinase of the intestinal juice, the amylytic enzyme amylase, the pancreatic lipase (steapesin), carboxypeptidase and nuclease. The enzyme trypsin hydrolyses proteins into polypeptides and peptones.

Carboxypeptidase is an exopeptidase. It attacks the peptide bonds at the carboxyl end of the polypeptide chain resulting in di-, tripeptides and amino acids.The pancreatic amylase converts starch into maltose. The lipase acts on emulsified fat (triglycerides) and hydrolyses them into free fatty acids and monoglycerides. Monoglycerides may be further hydrolysed to fatty acid and glycerol.

As a result of digestion, all macromolecules of food are converted into their corresponding monomeric units. Carbohydrates are broken into monosaccharides such as glucose and fructose. Proteins are hydrolysed into amino acids. Lipids get broken into glycerol and fatty acids. The simpler organic molecules along with minerals, vitamins and water enter into body fluids through the villi.

The villi are small microscopic finger-like projections. Each villus is an absorbing unit consisting of a lacteal duct in the middle surrounded by fine network of blood capillaries. While the fatty acids are absorbed by the lymph duct, other materials are absorbed either actively or passively by the capil-laries of the villi.

From the lumen of the alimentary canal absorbed food materials are carried to the liver through hepatic portal vein. From the liver, materials are transported to all other regions of the body for utilisation. This conversion of food into energy and cellular organisation is called as assimilation.