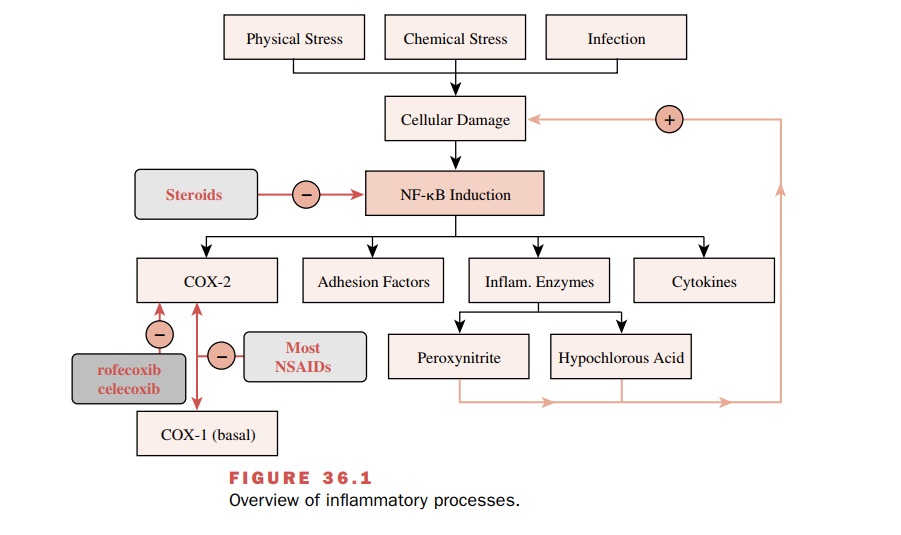 Inflammation begins when a stimulus, such as infection, physical stress, or chemical stress, produces cellular damage.

Inflammation begins when a stimulus, such as infection, physical stress, or chemical stress, produces cellular damage (Fig. 36.1). This damage initiates the activation of transcription factors that control the expression of many inflammatory mediators. Among the more impor-tant inflammatory mediators are the eicosanoids, biolog-ical oxidants, cytokines, adhesion factors, and digestive enzymes (proteases, hyaluronidase, collagenase, and elastase). Only the first three of these are therapeutic targets for anti-inflammatory drugs. 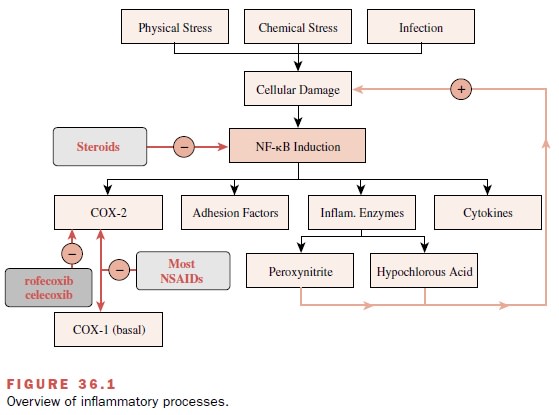 The inflammatory response changes with time and can be divided into phases. The rapid phase occurs within seconds to minutes and consists of vasodilation, increased blood flow, edema, and pain. The acute phase is characterized by induction of inflammatory genes by NF- κB and other transcription factors. During this phase, moderate amounts of inflammatory mediators are produced. The chronic phase occurs over months to years and is marked by dramatically increased produc-tion of inflammatory mediators. The secondary chronic phase of inflammation occurs after years of oxidative damage has degraded blood vessels and tissues. Such chronic inflammation appears to play a role in many disease states, such as arteriosclerosis and cancer.

The eicosanoids, so called because of their derivation from a 20-carbon unsaturated fatty acid, arachidonic acid (eicosatetraenoic acid), are obtained from mem-brane phospholipids and synthesized de novo at the time of cellular stimulation. Arachidonic acid is cleaved from membrane-bound phosphatidylcholine by the en-zyme phospholipase A2. Alternatively, arachidonic acid may be derived by the sequential actions of phospholi-pase C and diacylglyceryl lipase. Arachidonic acid can then follow either of two enzymatic pathways that re-sult in the production of inflammatory mediators. The pathway initiated by cyclooxygenase (COX) produces prostaglandins; the lipoxygenase pathway generates leukotrienes (Fig. 36.2). 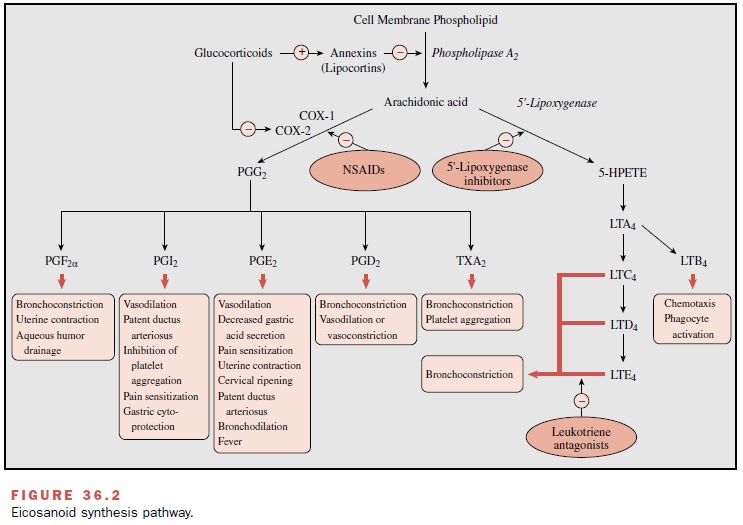 The COX enzyme exists in at least two isoforms. COX-1 is a constitutive or “housekeeping” isoform that is responsible for the basal production of prosta-glandins, prostacyclins, and thromboxanes. COX-2 is in-ducible by cytokines and other inflammatory stimuli and is believed to predominate during chronic inflammation. The final product of the COX pathway is tissue specific. For example, platelets produce thromboxane A2 (TxA2); vascular endothelial cells produce prostacyclin (PGI2); mast cells produce prostaglandin D2 (PGD2); and the vasculature, gastrointestinal (GI) tract, lung, and other tissues produce prostaglandin E2 (PGE2). 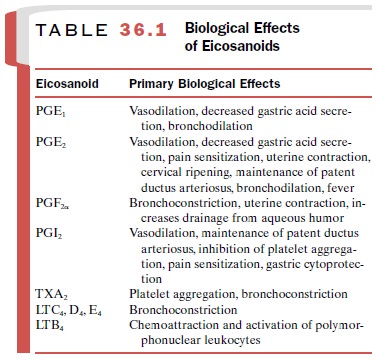 A number of eicosanoids are used as therapeutic agents. In infants with congenital heart anomalies, a patent ductus arteriosus can be temporarily maintained by the PGE1 analogue alprostadil (Prostin VR Pediatric) until surgical correction can be performed. In patients undergoing treatment with nonsteroidal anti-inflammatory drugs, the PGE1 analogue misoprostol (Cytotec) is often used to decrease gastric acid secre-tion, thereby inhibiting the ulceration caused by these agents. Misoprostol is also used in several non-FDA–approved applications, including the induction of labor by enhancing cervical ripening, and the induction of abortion in combination with mifepristone (RU-486). These uses of misoprostol are associated with an in-creased risk of uterine rupture or perforation. Dinoprostone (Prostin E2), a synthetic PGE2, causes uterine contraction and is used clinically to induce abor-tion during the second trimester and to empty the uterus following fetal death, missed abortion, or benign hydatidiform mole.

Carboprost (Hemabate) is a PGF2 analogue that can be used to terminate pregnancy or to control refractory postpartum bleeding by stimulating uterine contraction. Primary pulmonary hypertension can be treated by the synthetic PGI epoprostenol (Flolan). Elevated intraocular pressure may be treated with latanoprost (Xalatan), an analogue of PGF2. Zafirlukast (Accolate) is an oral leukotriene receptor antagonist for control of the inflammatory process of asthma . Zileuton (Zyflo) inhibits the first enzyme in the lipoxygenase pathway and is used for the treatment of asthma.

The biologically derived oxidants are potent bacterial killers but are also a major contributing factor in tissue injury that results from the inflammatory response.These oxidants include the superoxide anion ( .O2- ), hydrogen peroxide (H2O2-), nitric oxide ( .NO-), peroxynitrite ( .OONO- ), hypochlorous acid (HOCl), peroxidase-gen-erated oxidants of undefined character, probably the hy-droxyl radical ( .OH), and possibly singlet oxygen (1O2). These oxidants, largely generated by phagocytic cells such as neutrophils and macrophages, induce tissue injury beyond that produced by digestive enzymes and eicosanoids. Inhibition of production of these oxi-dants or inactivation of these substances by antioxidants is an important strategy for the treatment of inflammatory disorders.

Numerous cytokines participate in inflammation; among the most important regulators of this process are tumor necrosis factor- (TNF-α ) and interleukin 1 (IL-1). TNF-α and IL-1 are produced primarily by cells of the monocyte–macrophage lineage. They work in concert to stimulate inflammatory responses such as pain, fever, and the recruitment of lymphocytes. In ad-dition, they induce production of many other inflamma-tory mediators and contribute to the tissue damage seen in chronic inflammation.

TNF-α and IL-1 are current targets of antiinflam-matory drug therapy. A homotrimer of 17-kDa protein subunits whose effects include the activation of neu-trophils and eosinophils, induction of COX-2, induction of proinflammatory cytokines (e.g., IL-1, IL-6), enhance-ment of endothelial layer permeability, induction of ad-hesion molecules by endothelial cells and leukocytes, stimulation of fibroblast proliferation, degradation of cartilage, and stimulation of bone reabsorption. Two re-ceptors mediate these effects: a 55-kDa receptor (p55) and a 75-kDa receptor (p75). Each of these receptors is found in both cell surface and soluble forms. The binding of two or three cell surface receptors to TNF-α initiates an inflammatory response. Soluble p55 also acts as a sig-naling receptor for inflammatory responses, whereas sol-uble p75 acts as an antagonist.

IL-1 occurs as two polypeptides, IL-1α and IL-1β , and produces many of the same effects as TNF-α . An 80-kDa type 1 IL-1 receptor and a 68-kDa type 2 IL-1 receptor found on the surface of some cell types bind both forms of IL-1. An endogenous 17-kDa IL-1 recep-tor antagonist (IL-1ra) competes for binding with IL-1 and counterbalances the inflammatory response.