The Glyoxylate Cycle: A Related Pathway 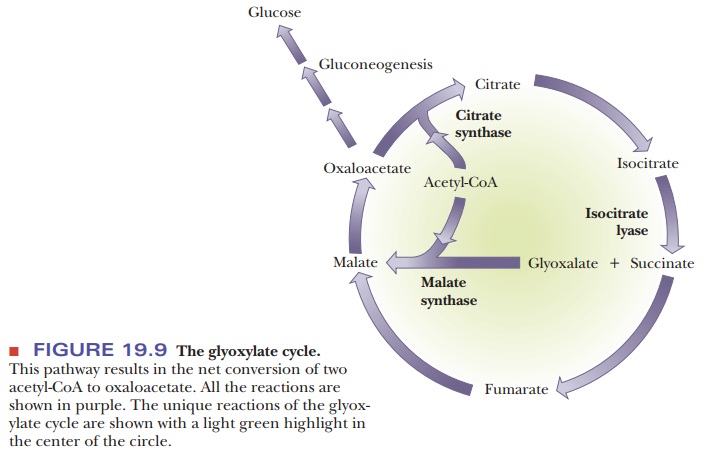 In plants and in some bacteria, but not in animals, acetyl-CoA can serve as the starting material for the biosynthesis of carbohydrates.

The Glyoxylate Cycle: A Related Pathway

In plants and in some bacteria, but not in animals, acetyl-CoA can serve as the starting material for the biosynthesis of carbohydrates. Animals can convert carbohydrates to fats, but not fats to carbohydrates. (Acetyl-CoA is produced in the catabolism of fatty acids.) Two enzymes are responsible for the ability of plants and bacteria to produce glucose from fatty acids. Isocitrate lyase cleaves isocitrate, producing glyoxylate and succinate. Malate synthase catalyzes the reaction of glyoxylate with acetyl-CoA to produce malate. 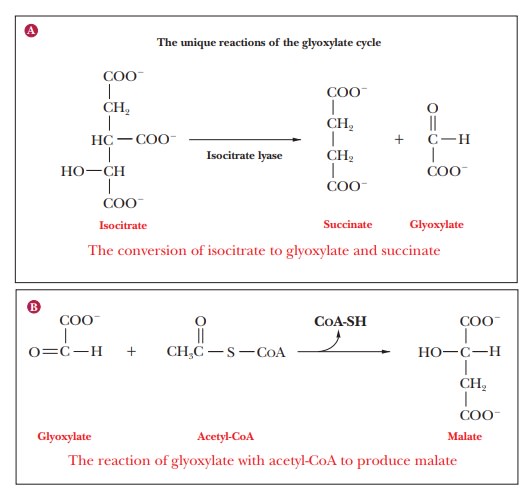 These two reactions in succession bypass the two oxidative decarboxylation steps of the citric acid cycle. The net result is an alternative pathway, the gly-oxylate cycle (Figure 19.9). Two molecules of acetyl-CoA enter the glyoxylatecycle; they give rise to one molecule of malate and eventually to one molecule of oxaloacetate. Two two-carbon units (the acetyl groups of acetyl-CoA) give rise to a four-carbon unit (malate), which is then converted to oxaloacetate (also a four-carbon compound). Glucose can then be produced from oxalo-acetate by gluconeogenesis. This is a subtle, yet very important, distinction between the glyoxylate cycle and the citric acid cycle. 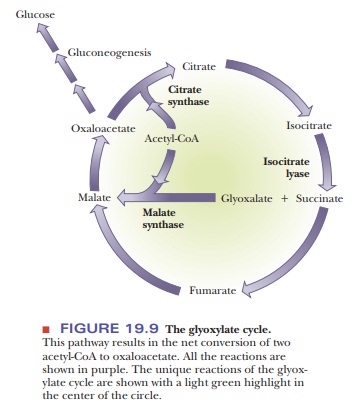 The carbon skeletons that enter the citric acid cycle as acetyl-CoA are effectively lost by the decar-boxylation steps. This means that if oxaloacetate (OAA) is drawn off to make glucose, there will be no OAA to continue the cycle. For this reason, fats cannot lead to a net production of glucose. With the glyoxylate cycle, the bypass reac-tions go around the decarboxylations, creating an extra four-carbon compound that can be drawn off to make glucose without depleting the citric acid cycle of its starting compound.

Specialized organelles in plants, called glyoxysomes, are the sites of the glyoxylate cycle. This pathway is particularly important in germinating seeds. The fatty acids stored in the seeds are broken down for energy during germi-nation. First, the fatty acids give rise to acetyl-CoA, which can enter the citric acid cycle and go on to release energy in the ways we have already seen. The citric acid cycle and the glyoxylate cycle can operate simultaneously. Acetyl-CoA also serves as the starting point for the synthesis of glucose and any other compounds needed by the growing seedling. (Recall that carbohydrates play an important structural, as well as energy-producing, role in plants.)

The glyoxylate cycle also occurs in bacteria. This point is far from surprising because many types of bacteria can live on very limited carbon sources. They have metabolic pathways that can produce all the biomolecules they need from quite simple molecules. The glyoxylate cycle is one example of how bacteria manage this feat.

In plants and bacteria, the glyoxylate cycle is a pathway that bypasses the two oxidative decarboxylations of the citric acid cycle. As a result of this pathway, plants can convert acetyl-CoA to carbohydrates, which animals cannot do.