The Genetic Basis of Identity

DNA technology has many practical uses. Because every individual has a unique DNA sequence, DNA samples can be used for identification.

THE GENETIC BASIS OF IDENTITY

DNA technology has many practical uses. Because every individual has a unique DNA sequence, DNA samples can be used for identification. The legal system is now using DNAevidence to determine guilt or innocence. The application of DNA technology began in Britain in the mid-1980s and appeared in America shortly afterward. Today many societies have reached the point of compiling DNA databases of known criminals—especially serious offenders. However, the most frequent use of DNA evidence is actually in cases of unknown or disputed paternity.

Identity can also be established in other ways. Just a casual glance reveals major differences among people. Geneticists refer to this outward appearance as the phenotype . Most physical differences between people are due to complex interactions of several genes during development. Some are obvious at a glance; others require close observation. Fingerprints are the classic example of a phenotype used in law enforcement. They are due to variations in the pattern of dermal ridges, small skin elevations on our fingers. Fingerprint patterns depend on more than one gene (i.e., they are multigenic ). This creates the huge genetic diversity underlying this phenotype. Although you might expect the fingerprints of identical twins to be the same, they are not identical. Minor variations in fingerprint patterns occur as a result of environmental factors affecting development. Fingerprints were being used for identification by the late 1800s.

Retinal scans provide a more high-tech form of unique identification. These take advantage of the unique pattern of blood vessels on the retina at the back of the eyes. Scanning typically takes about a minute, because several scans are needed. The subject must place the eye close to the scanner, keep the head still, and focus on a rotating green light. Infrared light is used for scanning because blood vessels on the retina absorb this better than the surrounding tissues. A computer algorithm is then used to convert the scan into digital data. There is about 10-fold more information in a retinal scan than in a fingerprint. 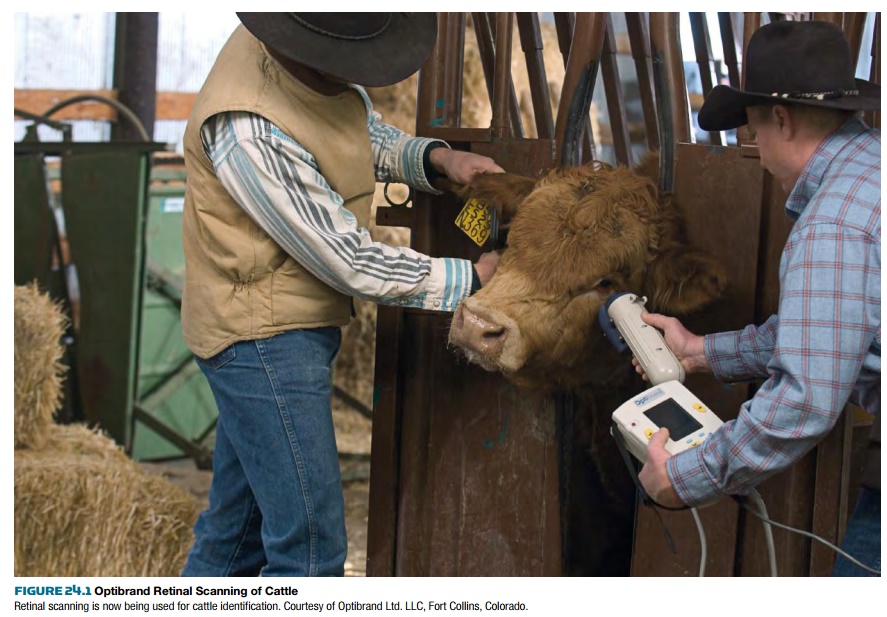 Previously, retinal scanning was mostly used in high-security situations—for example, by the CIA, the FBI, NSA, and some prison systems. However, it is now being used for animal identification ( Fig. 24.1 ). The Optibrand corporation now makes a handheld scanner for livestock, especially cattle. The setup incorporates a Global Positioning System time, date, and location stamp. The Optibrand system can identify and track individual animals through the food processing chain. This is of special relevance in tracing any animals suspected of being exposed to mad cow disease.

Moving to the molecular level, another set of identifying features are the proteins and polysaccharides made by all cells. Good examples of individual differences that involve proteins are the various blood types found in human populations. But for ultimate identification at the molecular level, we must examine the genes themselves to determine the genotype. This is what is meant by DNA typing or DNA fingerprinting , a technique that is described later.