The polymerase chain reaction (PCR) is a procedure for amplifying tiny amounts of DNA and is used when there is too little DNA, or the DNA is too degraded for DNA fingerprinting via the RFLP approach.

The polymerase chain reaction (PCR) is a procedure for amplifying tiny amounts of DNA and is used when there is too little DNA, or the DNA is too degraded for DNA fingerprinting via the RFLP approach. The details of PCR have already been discussed. PCR machines can amplify a segment of DNA (100 to 3000 bp long) in a few hours, starting from only a picogram (10 –12 g), although microgram (10 –6 g) quantities or larger are better. In fact, PCR can be used successfully to analyze DNA from a single cell.

Whereas classical DNA fingerprinting requires relatively long strands of DNA, PCR can be used on short segments of DNA. PCR is most useful for regions of the DNA with high individual variability. Small regions with high person-to-person variability are the best to amplify. If the sequences of two samples match in several highly variable regions, they are probably from the same person. In current practice, forensic DNA analysis is almost all done by PCR-based methodology.

Once the DNA from the forensic sample has been amplified by PCR, it is compared with DNA  from the suspect, or suspects. Spots of both DNA samples are bound to a membrane and tested for binding to a DNA probe that is either radioactive or tagged with a fluorescent dye. The probe either binds or doesn’t bind, so any spot is either positive or negative. This kind of test is known as a dot blot ( Fig. 24.7 ). Thus, the major difference between PCR and DNA fingerprinting is that DNA fingerprinting looks for differences in fragment sizes, whereas PCR tests for the presence or absence of specific stretches of DNA with identical (or almost identical) sequences. If necessary, segments of DNA that have been amplified by PCR can be fully sequenced. In this case, we do not need to rely just on hybridization as an indication of related sequences. In the future, such sequence identification will most likely be done by DNA array technology, which allows simultaneous analysis of multiple short sequences. 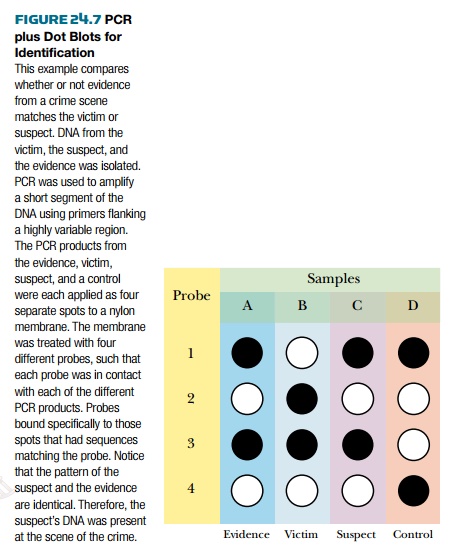 It is possible to analyze several STR loci simultaneously by running several PCR reactions in the same tube using different primers ( multiplex PCR ; Fig. 24.8 ). This requires that the multiple sets of primers do not interfere with each other, which is often difficult to achieve when running six or more amplifications together. Nonetheless, commercial kits are now available that can run up to 13 STR analyses in one reaction tube. Such a multiplex analysis gives a gel track with up to 2 N bands (where N is the number of loci analyzed). For this example, 13 STR loci would produce 26 bands. Fewer bands will be seen in individuals who are homozygous at any of the chosen loci. 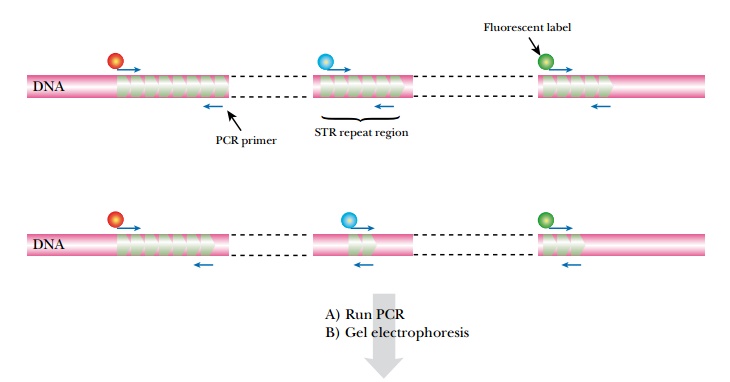 Despite the apparent complexity, the STRs that are used derive from known sequences at known chromosomal locations, and hence the individual bands can be identified and entered into computer databases. Multiplex STR analysis is the basis of the national database set up in the UK in 1995. Similar databases are now used in other European nations and, since 1998, in the United States.