DNA fingerprinting relies on the unique pattern made by a series of DNA fragments after separating them according to length by gel electrophoresis.

DNA fingerprinting relies on the unique pattern made by a series of DNA fragments after separating them according to length by gel electrophoresis. DNA samples from different suspects, the victim, and samples from the crime scene are first purified. Restriction enzymes cut the DNA samples into fragments of different lengths. Consequently, the variation in the size of the fragments and hence of their positions on an agarose gel is due to differences in where cutting occurs. Thus differences in patterns between individuals are due to differences in the base sequence of their DNA. The nucleotide differences that cause the fragment lengths to vary are called restriction fragment length polymorphisms.  There is believed to be approximately one difference in every 1000 nucleotides between nonrelated individuals. 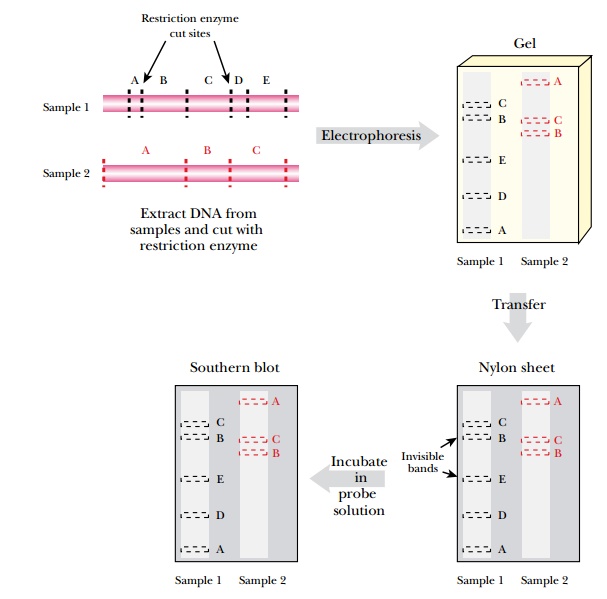 The steps involved in DNA fingerprinting are as follows ( Fig. 24.4 ):

1 . The DNA is cut with a restriction enzyme.

2 . The DNA fragments are separated according their length or molecular weight by gel electrophoresis.

3 . The fragments are visualized by Southern blotting. After transfer of the separated fragments from the gel to nylon paper a radioactively labeled DNA probe is added. The probe will bind to those DNA fragments whose DNA sequences are complementary to the probe.

4 . An autoradiograph is made by covering the blot with radiation-sensitive film. This will show the location of those DNA fragments that reacted with the radioactive probe.

There are many different restriction enzymes, most with unique cutting properties. In practice several different enzymes are used with the same DNA samples, giving different sets of fragments for different people. These can be compared with DNA samples taken from a victim or found at a crime scene. Because there is so much genetic diversity, RFLP patterns from different people can vary a lot. Even if mutations have changed a small percentage of the target sequence around the cut site, there will usually still be enough similarity for binding of the probe to occur. The entire process requires several weeks to finish. 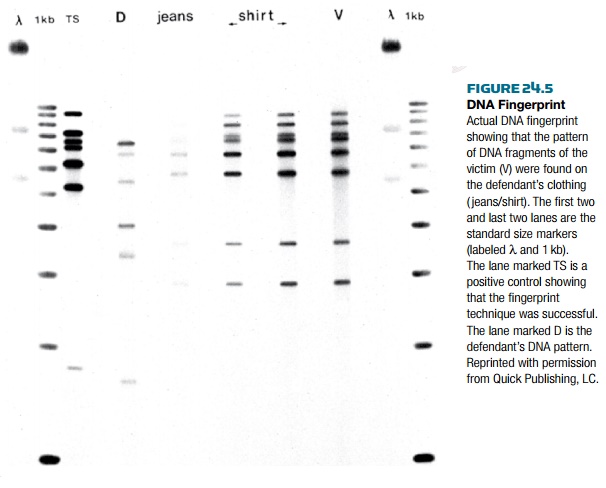 The final product of a DNA fingerprint is an autoradiograph that contains at least five essential lanes ( Fig. 24.5 ). The markers are standardized DNA fragments of known size, which have been radioactively labeled. These help determine the size of the various fragments. The “control” is DNA from a source known to react positively and reliably to the DNA probes and shows whether the test has worked as expected. The experimental lanes have samples from the victim, the defendant, and the crime scene. In this example, blood from the defendant’s clothing was compared with his/her own blood and the victim’s blood. The DNA from the clothing actually matches that of the victim.

Two variants of DNA fingerprinting have been used— single-locus probing (SLP) and multiple-locus probing (MLP) . In SLP, a probe is used that is specific for a single site, that is, a single locus, in the genomic DNA. Because humans are diploid, an SLP probe will therefore normally give rise to two bands from each person for each particular locus. This assumes that the chosen locus shows substantial allelic variation. Occasional persons will be homozygous and hence show only a single band. For full identification using SLPs, it is necessary to run several reactions, each using a different SLP probe. SLP analyses use smaller amounts of material than MLP and are easier to interpret and compare. Statistical analysis and population frequencies are possible using SLP data.

Historically, MLP was used before SLP. In MLP, a probe is used that binds to multiple sites in the genome. Consequently, an MLP probe generates multiple bands from each individual. Because it is not known which particular band comes from which particular locus, interpretation is difficult. Furthermore, statistical analysis is impractical and data cannot be stored reliably in computer databases. In practice, fingerprints generated by MLP probes must be directly compared with others run on the same gel. Consequently, MLP methods have largely been displaced by SLP analysis.