Identifying the Remains of the Russian Imperial Family

An interesting example of forensics concerns the identification of the remains of the Russian royal family.

IDENTIFYING THE REMAINS OF THE RUSSIAN IMPERIAL FAMILY

An interesting example of forensics concerns the identification of the remains of the Russian royal family. Analysis of both short tandem repeats in chromosomal DNA and sequencing of mitochondrial DNA were involved. The last Tsar of Russia, Nicholas Romanov II, was executed in July 1918 together with his family and a handful of servants. After execution by a firing squad of Bolshevik soldiers, the bodies were buried in a hidden mass grave. The burial site was rediscovered in 1989, and in 1991 nine skeletons were excavated. Thorough forensic analysis of the bones, clothing, and personal possessions from the grave provided evidence that some of the skeletons belonged to the tsar and his family. American and British teams, at the invitation of the Russian government, then carried out DNA testing.

Nuclear and mitochondrial DNA tests were performed on the nine bone samples. Five of the bodies were clearly related, as demonstrated by STR analysis at five differentgenetic loci ( Fig. 24.10 ). These were Tsar Nicholas, his wife, the Tsarina Alexandra, and three of their four daughters. The fourth daughter and their son, Prince Alexei, the heir to the throne, were missing—their bodies had apparently been destroyed completely by burning before the mass burial. The other four remains were those of servants who were unrelated to the royal family.

The identity of the remains of the tsarina was confirmed by sequencing mitochondrial DNA. Tsarina Alexandra was the granddaughter of Queen Victoria of England. Alexandra’s sister, Princess Victoria of Hesse, was the grandmother of Prince Philip, Duke of Edinburgh, husband of the present queen of England. A sample of blood provided by Prince Philip showed an mtDNA sequence that was identical to that of the remains presumed to belong to Tsarina Alexandra. 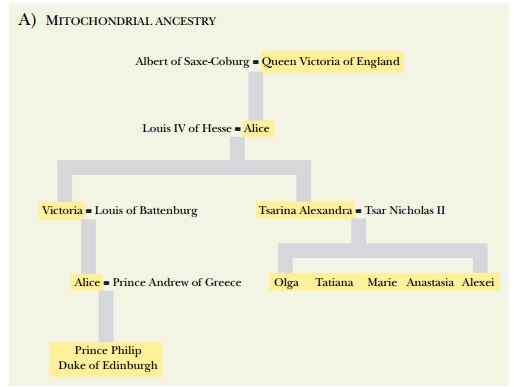 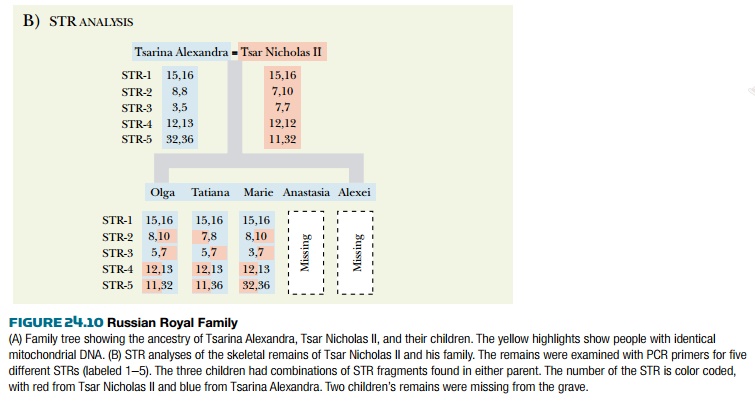 The mtDNA of the tsar himself proved more intriguing. Two distant maternal relatives of the tsar, Countess Xenia Sfiri and the Duke of Fife, contributed samples for comparison. Their mtDNA sequences were identical to each other. The tsar’s mtDNA was identical to the relatives except at position 16169. Here both relatives had T but the tsar had a mixture, with 70% T and 30% C at position 16169. This suggested either that the sample was contaminated or that he had a rare condition known as heteroplasmy .

In a few individuals, there are two populations of mitochondria with slight differences in mtDNA sequence—that is, heteroplasmy. This condition is sometimes inherited via the maternal line. However, often the minority population of mitochondria is not present in all descendants. The matter was settled by exhumation of the body of Georgij Romanov, younger brother to the tsar, who died of tuberculosis in 1899. Georgij also showed heteroplasmy with the same mixture of T and C at position 16169 of his mtDNA. The rarity of heteroplasmy provides extremely high probabilities for correct identification when a match is found. In this case the likelihood ratio for authenticity was estimated at over 100 million!

On July 17, 1998, more than a million people attended the reburial of the last Imperial monarch of Russia, Tsar Nicholas II, together with his wife Tsarina Alexandra, and three of their five children, Olga, Tatiana, and Maria. The ceremony took place in the Peter and PaulFortress in St. Petersburg (known as Leningrad during the communist period).