Tracing Genealogies by Mitochondrial DNA and the Y Chromosome

Mitochondrial DNA sequences have been very useful in tracing the recent evolution of the human species at the molecular level.

TRACING GENEALOGIES BY MITOCHONDRIAL DNA AND THE Y CHROMOSOME

Mitochondrial DNA sequences have been very useful in tracing the recent evolution of the human species at the molecular level. Analysis of mitochondrial DNA (mtDNA) can also be used in forensics. The main advantage is that mitochondrial DNA is present in multiple copies per cell and so is relatively easier to obtain in sufficient amounts for analysis. The sequence of mtDNA varies by 1% to 2% between unrelated individuals.

Mitochondrial DNA has been used to derive family ancestries. Indeed, it is now possible to submit personal samples of DNA for analysis to companies such as Oxford Ancestors. Their MatriLine service allows persons of European descent to trace their maternal ancestry back to one of seven ancestral females ( Fig. 24.9 ). Almost everyone in Europe, or whose maternal roots are in Europe, is descended from one of only seven women whose descendants make up well over 95% of modern Europeans. For genealogical purposes, each of these seven women may be regarded as the founder of a “maternal clan.” For those whose maternal roots lie outside Europe, a similar analysis is available, but is not yet so detailed. 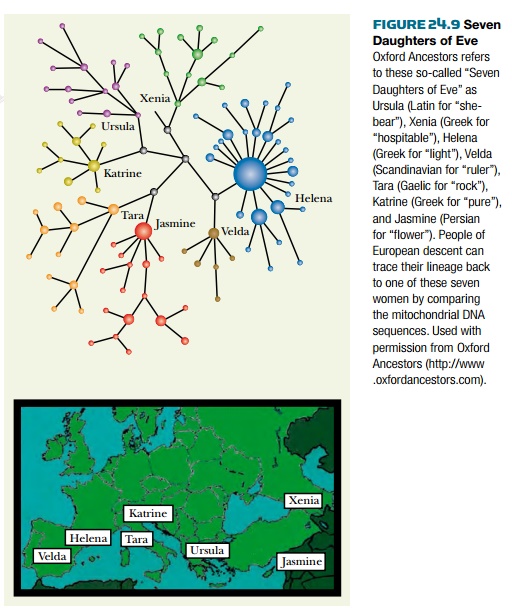 In contrast to mitochondrial DNA, the Y chromosome follows a paternal pattern of inheritance. The Y chromosome contains many STR sequences in noncoding regions. However, most have few different alleles, and so only a few are suitable for forensic analysis. One advantage of using Y-linked STR loci is that any sequence specific to the Y chromosome must have come from a male. This is often useful in cases of sexual assault.