That Sunday Morning: Section I

Listen to your teacher read a part of the story. Go through the questions given below in section I. Answer them in one or two sentences.

Listen to your teacher read a part of the story. Go through the questions given below in section I. Answer them in one or two sentences.

My father was posted in Patna. On the first Sunday there, my brother and I decided to do a little exploring on our bikes. It was still very early in the morning, and only a few people were about. The roads were good and the trees lining them were shady. There were no imposing buildings or monuments as there are in Delhi, from where we had just come.

After cycling for about half-an-hour, my brother got bored and said, " Come on, I'll race you to that corner. The loser treats the other to a chocolate, okay?" 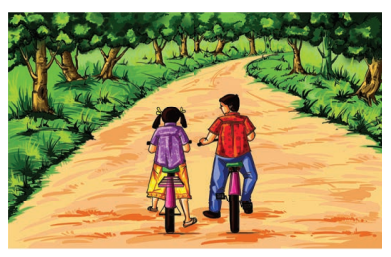 This was not the first time we had raced. Only my brother had invariably beaten me and then crowed about it for days. I was determined to win this time. I pedalled as fast as I could. My legs ached and my skirt billowed out, threatening to hit my face. The trees on either side of the road had become one green blur. My hair blew behind me and my lungs were bursting for air. Soon I drew level with my brother and then gradually I moved ahead.

Answer in one or two sentences.

1. Why did the family move to Patna?

The father was posted in Patna. So the family moved to Patna.

2. Who was challenged for a race?

The sister was challenged for a race.

3. Is the brother boastful? What makes you think so?

Yes, the brother is boastful. He crowed about his winning for days.

4. Why did the trees become a green blur?

The bicycles raced fast. So the trees became a green blur.

5. Which line tells you that the girl was faster than the boy?

… … and then gradually I moved ahead.

billowed out - to flare out in the wind

The teacher to a student: Conjugate the verb " to walk" in simple present.

The student: I walk. You walk ... The teacher interrupts him:  Quicker please.

Once there were three turtles. One day they decided to go on a picnic. When they got there, they realized they had forgotten the soda. The youngest turtle said he would go home and get it if they wouldn't eat the sandwiches until he got back. A week went by, then a month, finally a year, when the two turtles said,"Oh, come on, let's eat the sandwiches." Suddenly the little turtle popped up from behind a rock and said, " If you do, I won't go!"

Why was the math book always worried?

Because it had so many problems

What's bigger than an elephant but doesnt weigh anything?

Where can you always find a peacock?

What dies but never lives?

What has two legs but can't walk?

A pair of pants

What makes a skeleton laugh?

When something tickles his funny bone.

* Both of you stand together separately.

* Will you hang the calender or else, I will hang myself.

* Give me a blue pen of any colour.

* Pick up the paper and fall in the dustbin.

* Why are you looking at the monkeys outside when i am inside?

* All of you stand in straight circle.

* I have two daughter both are girls

There really is a science to laughing. In fact, the science of laughing and its effects on the body is referred to as Gelotology.

Laughter boosts your immune system by enhancing your antibodies – which help fight infections – and increasing your immune cell count. This helps reduce chance of illness and missing out on w

The American Comedy Awards are a group of awards presented annually in the United States recognizing performances and performers in the field of comedy. It was begun in 1987.