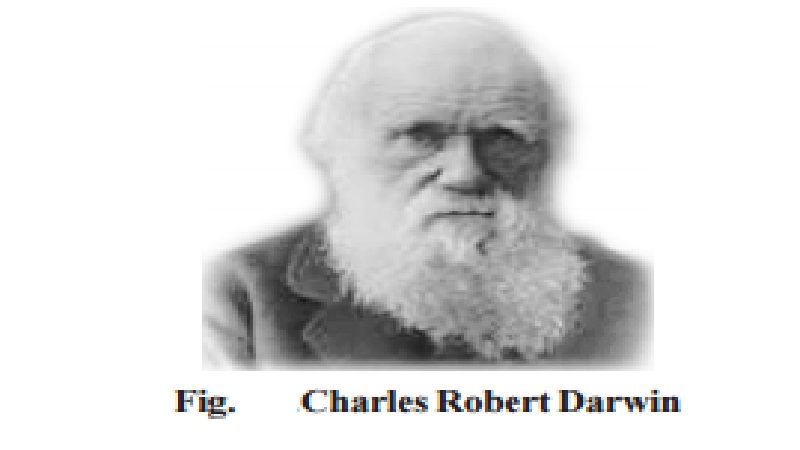 Darwinism comprises the natural selection concept as advanced by Charles Robert Darwin in 1859. His theory provided the correct idea to explain all processes and intricate mechanisms of evolution.

Darwinism comprises the natural selection concept as advanced by Charles Robert Darwin in 1859. His theory provided the correct idea to explain all processes and intricate mechanisms of evolution. The theory of natural selection is considered on par with Newton's law of gravitation and Einstein's theory of relativity. The monumental work of Darwin was titled as 'The Origin of species' (the original full title of the book was 'On the Origin of species by means of Natural Selection, or the Preservation of favoured Races in the struggle for life').

The book of Darwin convincingly demonstrates the fact of evolution. Further, it elaborates on the theory of natural selection as a convincing mechanism for providing evolutionary transformations.

Charles Darwin was born in Shrewsbury, England on February 12, 1809. While studying in college at England through his friendship with Professor J.S. Henslow, Darwin became familiar with Botany. Later he accepted the job of a naturalist aboard the ship H.M.S Beagle. The ship was to spend five years, in exploration around South America (1829 - 34).

During the period of five years, Darwin visited pacific islands and many parts of the world. He returned to England in 1836. Later he worked for a further period of 20 years to develop his theory of natural selection. While Darwin prepared his work for publication, a similar idea to explain evolution was proposed by another naturalist, Alfred Russel Wallace (1823-1913) from Malay archipelago. Charles Darwin gracefully accepted for the publication of his theory as a joint paper with Wallace. Thus the theory of natural selection is actually titled as ' Darwin-Wallace theory of evolution'.

The Theory of Natural Selection

During his period of study Darwin has made several observations and collected facts. Through these facts he arrived at certain conclusions. These conclusions constitute Darwinism. Thus Darwinism or the theory of Natural selection includes the following elements.

1. Overproduction or Prodigality of nature

All living beings have an innate desire to reproduce and form their own progeny. In this attempt they have the capacity to multiply in a geometrical manner. Such an enormous reproductive potentiality can be observed in all species of organisms. For example a single female salmon fish can produce 28,000,000 eggs in a season. A common oyster of the Atlantic coast may release as many as 80 million eggs in one season. At the time of breeding the ovaries of a cod fish may contain 10 million eggs. If natural processes of reproduction are allowed without any check a single pair of English sparrows can produce 275 billion descendents in 10 years. The elephants are the slowest breeders. An elephant begins to breed at 30 years of age. It goes on breeding till it is 90 years old. A female elephant can give birth to 6 young ones during its life time. Under these conditions, a pair of male and female elephants can cause the production of 19 million elephants in 750 years. Thus, the reproductive capacity is an innate nature of living organisms.

According to Darwin while the population increases in geometric ratio there is no corresponding increase in food production. This causes an intensive struggle for living. The struggle happens for food, space for living and for coping with environmental conditions. The struggle may be intraspecific or interspecific. In an intraspecific struggle there is a competition among the individuals of the same species. Such a struggle is severe because the needs of the competing organisms are identical. Struggle might happen with environment too. Conditions like heat, cold, drought, storms, floods and other natural changes can affect organisms resulting in struggle for existence.

3. The universal occurrence of variations

The occurrence of variations is a characteristic feature of all groups of animals and plants. The variations may be morphological , anatomical, physiological or behavioral. (However during Darwin's time the actual cause and nature of variations were not known).

As a result of variations, no two animals would look alike. Even the progeny of the same parents are not exactly alike in all respects. Eventhough variations are universal all such variations need not be significant from an evolutionary point of view. Certain variations that get established in the population and get inherited continually are termed, heritable variations. Such variations form the raw material for evolution.

4. Survival of the fittest

While all living organisms face the struggle for existence, certain organisms possessing adequate modifications are able to escape and

survive. Such modifications are due to inherent variations. Hence favourable variations make an animal or a plant to be successful in life. They survive as fittest organisms in an environment which gets altered frequently.

According to Darwin 'the fittest' forms that are allowed to survive are chosen by 'Natural Selection' (an imaginative concept which includes all real aspects of the natural environment that supports the life of organisms).

The forces of natural selection will encourage only those that have suitable variations as adaptive features, to survive. Darwin designated them as 'fittest' forms. All other organisms having non adaptive or deleterious modifications shall be disqualified. Natural selection will eliminate such organisms from the populations. The selected group of modified individuals will occupy the next level in the evolutionary ladder.

Darwin strongly believed that using the natural selection concept, all evolutionary processes in the living world can be explained. As an example he differed from the explanation provided by Lamarck while explaining the lengthening of neck in giraffe. According to Darwin the population of giraffes had individuals having varying neck lengths. Those that had longer necks had more survival value, since they had more food and remained healthy. Gradually natural selection encouraged them to survive. Thus in course of time the average length of the neck increased.

While the ideas of Darwin, related to reproductive capability, prevalence of variations, concept of struggle and survival of suitable forms are all commonly accepted, there are certain drawbacks in his original theory.

1.                Darwin could not explain, the origin and cause for variations while insist-ing their importance in progressive evolution.

2.                He overemphasized the importance of the 'fittest' organisms. During later periods it has been suggested that 'fit' and fitter forms can also exist along with the fittest.

3.As the principle of inheritance as explained in the later years were not available during Darwin's time. Hence he believed in the theory of 'pangenesis'. According to this concept from every organ in the body very minute such replicate structures will orginate. Later they are transferred to the gonads for transmission to future generations.

4.                'Over-specialization' as in Irish deer and its consequent harmful effect on animals had not been accounted for by Darwin.

A modified form of Darwinism is known as neo-Darwinism. It was developed due to acceptance of Darwinism and provision of several evidences in support of Natural Selection concept. The early neo-Darwinians were T.H. Huxley of England, Asa Gray of United States and E.Haeckel of Germany.

The neo-Darwinians differentiated the germplasm from somatoplasm and proposed the 'germplasm concept'. They also belived that characters are due to certain factors called the determinants that control the development. The neo-Darwinism concept was incomplete and erroneous. It lacked in an understanding of genetics as it is known in later periods.