Syphilis is a systemic disease caused by the motile spirocheteTreponema pallidum.

Syphilis is a systemic disease caused by the motile spirocheteTreponema pallidum. The spirochete is transmitted by directcontact, invading intact mucous membranes or areas of abraded skin. A painless ulcer at the site of inoculation fol-lows, usually within 6 weeks following exposure. The ulcer is firm, with elevated edges; it lasts for several weeks. One to 3 months later, a skin rash occurs, or, in some patients, raised lesions (condyloma lata) appear on the genitalia.

Spontaneous abortion, stillbirth, and neonatal death are more frequent in any untreated patient, whereas neonatal infection is more likely in primary or secondary rather than latent syphilis. Newborns with congenital syphilis may be asymptomatic or have the classic signs of the syndrome, al-though most infants do not develop evidence of disease for 10 to 14 days after delivery. Early evidence of the disease includes a maculopapular rash, “snuffles,” mucous patches on the oropharynx, hepatosplenomegaly, jaundice, lymph-adenopathy, and chorioretinitis (Fig. 15.2). Later signs in-clude Hutchinson teeth, mulberry molars, saddle nose, and saber shins. 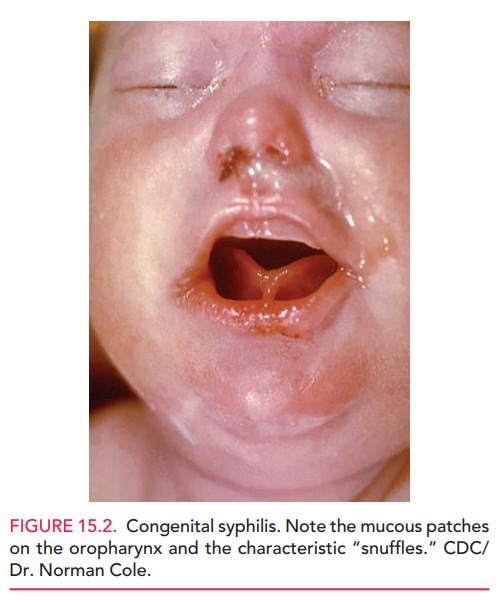 Therapy differs by stage of disease and is generally the same as that recommended for nonpregnant adults. There are no proven alternative therapies to penicillin for treating syphilis in pregnancy. Therefore, patients with penicillin sensitivity require skin testing, followed by de-sensitization for those with a true penicillin allergy. The Jarisch-Herxheimer reaction occurs most often among patients with early syphilis and is an acute febrile reaction that typically occurs in the first 24 hours after treatment. In pregnancy, this reaction may precipitate preterm labor or cause fetal distress and may warrant close observation of mothers after treatment. Post-treatment titers (RPR or VDRL)should be followed serially for at least one year. A fourfold increase in serologic titer, or persistent or recurrent signs or symptoms, may indicate inadequate treatment or re-infection. Retreatment is indicated in either case. Response to therapy is again evaluated by following serologic titers.