Home | | Biochemical Pharmacology | Synthetic drugs may exceed the corresponding physiological agonists in selectivity
Posted On :  09.09.2017 03:50 am

Synthetic drugs may exceed the corresponding physiological agonists in selectivity

Angiotensin is an example of a peptide hormone. Peptide hormones and neurotransmitters are very numerous, and new ones are constantly being discovered, as are new loca-tions and receptors for known ones.

Synthetic drugs may exceed the corresponding physiological agonists in selectivity

Angiotensin is an example of a peptide hormone. Peptide hormones and neurotransmitters are very numerous, and new ones are constantly being discovered, as are new loca-tions and receptors for known ones. While several drugs exist that act on peptide receptors (most notably, opioids), drug development generally lags behind the physiological characterization. The situation is quite different with an-other group of hormones / transmitters, which are small-er molecules, most of them related to amino acids. With many of these, the availability of drugs has enabled the characterization of different classes of receptors and their physiological roles. The classical example is the distinction ofα- and β-adrenergic receptors (which we will consider in more detail later on in this course). While both epinephrine and norepinephrine act on either receptor (though with somewhat different potency), the distinction became very clear with the synthetic analog isoproterenol, which acts very strongly on β-receptors but is virtually inactive on α-receptors (Figure 1.7). 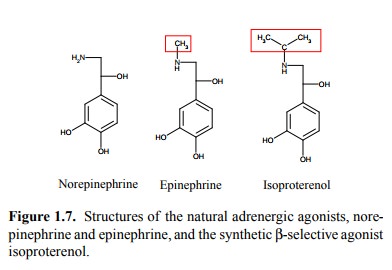 Agonists and antagonists that are more selective than the physiological mediators are both theoretically interesting and of great practical importance. As a clinically signifi-cant example of a selective receptor antagonist, we may consider the H2 histamine receptor in the stomach, which is involved in the secretion of hydrochloric acid (Figure 1.8a). The mediator itself – histamine – was used as starting point in the search for analogs that would bind to the receptor but not activate it. The first derivative that displayed strongly reduced stimulatory activity (while still binding to the re-ceptor, of course) was N-guanylhistamine (Figure 1.8b). Further structural modification yielded cimetidine, which was the first clinically useful H 2 receptor blocker. It rep-resented a major improvement in ulcer therapy at the time and is still in use today, although more modern drugs have largely taken its place. 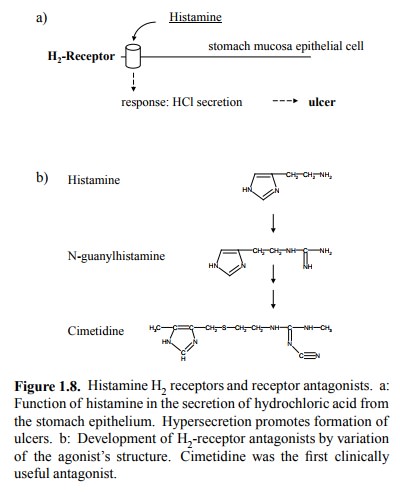 While H2-selective blockers retain some structural resem-blance to the original mediator (histamine), the same cannot be said of the likewise clinically useful H1 blockers, which were developed for the treatment of allergic diseases such as hay fever (Figure 1.9).

Indeed, the H1 blockers do seem to be plagued by signifi-cant `cross-talk' to receptors other than histamine receptors. This is not uncommon – many agents, particularly those that readily penetrate into the central nervous system, have incompletely defined receptor specificities, although they are usually given a label suggesting otherwise. They are frequently used regardless on a empirical basis, often for fairly diverse indications. 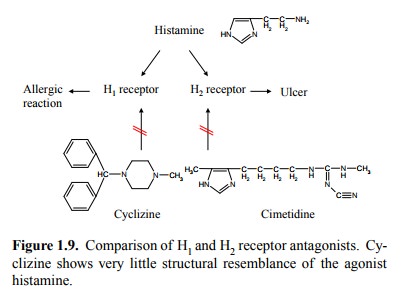