Drug development strategies may be classified as follows:

Note that these distinctions are not really sharp in practice. E.g., the development of H2-receptor blockers described above would be a mixture of strategies 1 and 2. In reality, one will always try to rationally make use of as much infor-mation as possible and then play some kind of lottery to do the rest.

An example of the rational approach to drug design is pro-vided by the development of HIV (human immune defi-ciency virus) protease inhibitors. HIV protease cleaves vi-ral polyproteins – the initial products of translation – into the individual protein components and thus is essential for the maturation of virus particles. The crystal structure of HIV protease was used to design synthetic molecules that would snugly fit into the active site. Figure 1.11 shows the inhibitor saquinavir bound to the the enzyme. HIV pro-tease inhibitors have become one of the mainstays of HIV therapy; their use in combination with reverse transcrip-tase inhibitors greatly extends the life expectancy of HIV patients. 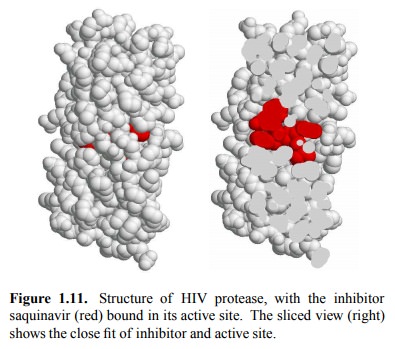 1.  Systematically test every new (or old) compound for drug activity in all kinds of drug activity assays – no matter which purpose it was designed for

2.  If you stumble upon something, figure out how it works

A classic success case of the brute-force approach is the discovery of `Prontosil rubrum', the first sulfonamide type antibacterial drug (Figure 1.12). `Rubrum' means `red' in Latin – so this is another dye turned drug. The biochemical mechanism was completely unknown by the time, but the drug nevertheless was very active against a considerable range of bacterial species. The discovery of sulfonamides in the 1930s was a major reason for the delay in the devel-opment of penicillin, the effect of which was discovered in 1928 but which was not available for clinical use before 1942 (see below). 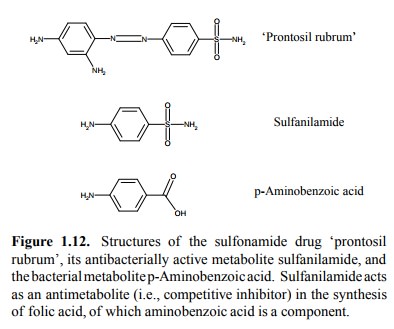 The brute force approach to drug discovery is still widely used, and one of the reasons why drug design is now large-ly done by major pharmaceutical companies. In fact, pron-tosil was discovered at the biggest pharmaceutical compa-ny of the era, the German `IG Farben', which was disman-tled after the war for its involvement with the production of poisons used in the holocaust.

Traditional medicine is largely based on plants and their various poisons. There is a fair number of drugs original-ly isolated from plants that are still being used in clinical medicine – even if most of them are now prepared synthet-ically. This approach may be summarized as follows:

1.  Isolate the active components from therapeutically useful and / or toxic plants 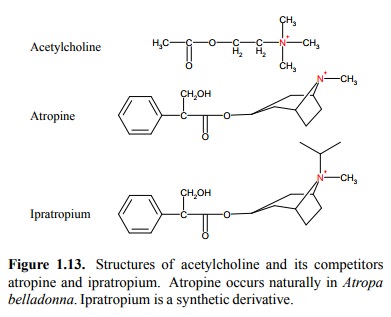 A classical example is atropine (Figure 1.13). It is isolated from the plant Atropa belladonna. `Bella donna' is a com-mon phrase in schmaltzy songs of (true or pretended) Ital-ian origin and means `beautiful woman'. In the old days, atropine was used by young women to augment their looks before attending festivities. It widens the pupils of the eyes, and it prevents sweating, therefore leading to accumulation of heat and to red cheeks. At higher dosages, it also caus es hallucinations, which may or may not be helpful with falling in love. The hallucinations are, obviously, caused by atropine entering the central nervous system.  The central effects are lessened by derivatization of the tertiary amine found in atropine to a quaternary amine, as in ipratropium. Because of its permanent charge, ipratropium does not easily cross the blood brain barrier by `non-ionic diffusion', and it is therefore often preferred over atropine in clinical medicine.

The final approach to drug development consists in taking advantage of  mere chance. The most striking example that comes to mind is the discovery of penicillin. Here is a summary of this `strategy':

1.  Forget to properly cover your petri dish and

2.  Have the petri dish contaminated by a mold that kills bacteria (Sir Alexander Fleming, 1929),

3.  Wait until somebody else purifies the active ingredient and makes it available for clinical use (Florey and Chain, 1942).

S.A.Waksman took up this paradigm of  drug discovery in the 1940's in a more systematic way, starting at stage 2 rather than 1. He succeeded in isolating a large number of antibiotics from a wide variety of soil microorganisms, particularly streptomycetes. The first example was thyrotricin, which is useful for local treatment only.  More prominent discoveries of his are streptomycin and chloramphenicol, which can be used systemically and still have their place in therapy today.