Drugs need to bind to target molecules. Is there anything remarkable about this statement at all?

Drugs need to bind to target molecules. Is there anything remarkable about this statement at all? Well, two things: 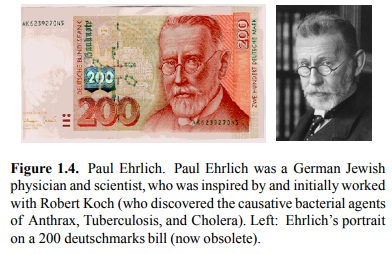 The idea of defined receptor molecules for drugs or poisons was conceived by Paul Ehrlich (Figure 1.4). Ehrlich worked on a variety of microbes and microbial toxins. He observed  that many dyes used to stain specific structures in micro-bial cells in microscopic examinations also exerted toxic effects on the microbes. This observation inspired him to systematically try every new dye he could get hold of (and new dyes were a big thing in the late 19th century!) on his microbes. Although not trained as a chemist himself, he managed to synthesize the first effective antibacterial drug – an organic mercury compound dubbed `Salvarsan' that was clinically used to treat syphilis for several decades, un-til penicillin became available. Ehrlich screened 605 other compounds before settling for Salvarsan. In keeping with his enthusiasm for colors and dyes, Ehrlich is credited with having possessed one of the most colorful lab coats of all times (he also had one of the most paper-jammed offices ever). His Nobel lecture (available on the web) is an inter-esting read – a mix of brilliant and utterly `naive' ideas that makes it startlingly clear how very little was known in biol-ogy and medicine only a century ago.

So, what molecules are targets of drugs? Some typical ex-amples are found in the human renin-angiotensin system, which is important in the regulation of blood pressure (Fig-ure 1.5. Angiotensinogen is a plasma protein that, like most plasma proteins, is synthesized in the liver. From this pro-tein, the peptide angiotensin I is cleaved by the specific pro-tease renin, which is found in the kidneys (ren lt. = kidney). Angiotensin I, which is only weakly active as a mediator, is cleaved further by angiotensin converting enzyme, which is present in the plasma. This second cleavage releases an-giotensin II, which is a very powerful vasoconstrictor. An-giotensin II acts on a G protein-coupled receptor, amem-brane protein that is found on vascular smooth muscle cells. Through a cascade of intracellular events, this receptor triggers contraction of the muscle cell, which leads to con-striction of the blood vessels and an increase of blood pres-sure). 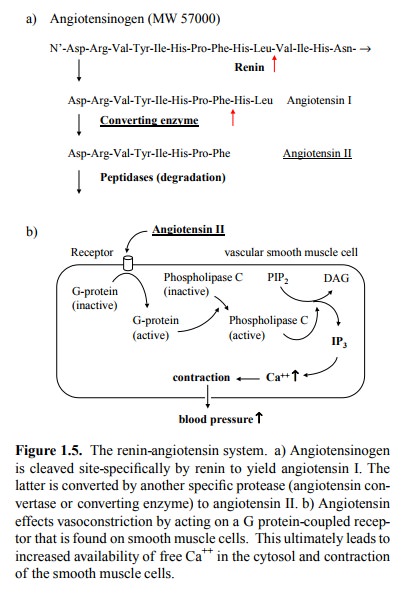 Increased activity of the renin-angiotensin system is fre-quently observed in kidney disease, which may lead to ab-normally high release of renin. Several points in the system are amenable to pharmacological inhibition. The first one is renin itself, which splits a specific bond in the angiotensino-gen polypeptide chain (Figure 1.5a). An inhibitor of renin is remikiren (Figure 1.6a). 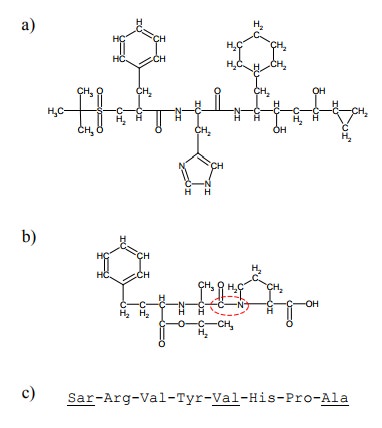 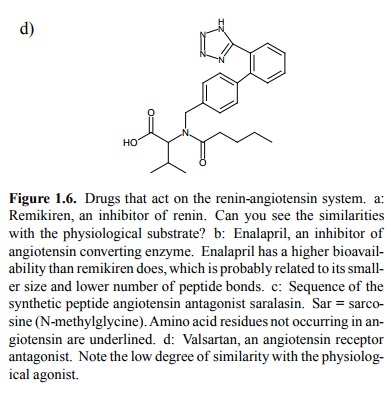 Remikiren (Figure 1.6a) is effective but has several short-comings, such as low `bioavailability' – which means that the drug does not efficiently get into the systemic circula-tion after oral uptake. Of course, oral application is quite essential in the treatment of long-term conditions such as hypertonia. A major cause of low bioavailability of drugs is their metabolic inactivation. Drug metabolism mostly happens in the liver (and sometimes in the intestine) and of-ten is a major limiting factor of a drug's clinical usefulness. Remikiren contains several peptide bonds, which likely are a target for enzymatic hydrolysis.

The most practically important drugs that reduce an-giotensin activity are blockers not of renin but of an-giotensin converting enzyme blockers, such as enalapril (Figure 1.6b). These have a major role in the treatment of hypertonia. In contrast to remikiren, enalapril is of smaller size and has only one peptide bond, which is also less acces-sible than those of remikiren. These features correlate with a bioavailability higher than that of remikiren.