Metabolism of physiological mediators and of drugs

1. Turning an agonist into an inhibitor, and 2. Increasing receptor selectivity.

Metabolism of physiological mediators and of drugs

So far, we have encountered two reasons for designing drug molecules that are structurally different from physiological mediators:

1.  Turning an agonist into an inhibitor, and

Both these reasons relate directly to the interaction of the drug molecule with its target. A third rationale for varying the structure of the drug molecule is that most physiological mediators are rapidly turned over in the organism, which is usually undesirable with drugs. E.g., angiotensin lives only for a few minutes (as does saralasin); the same applies to epinephrine and norepinephrine2. With these, one impor-tant pathway of inactivation consists in methylation (Figure 1.10). 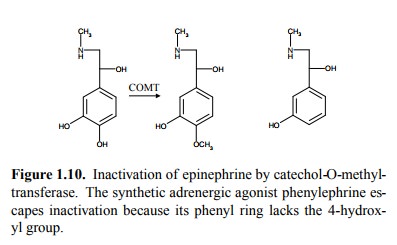 The drug phenylephrine (Figure 1.10, right) lacks the cru-cial hydroxyl group that normally initiates inactivation of epinephrine and therefore persists for hours rather than minutes in the organism, making it more practically useful in pharmacotherapy (`take this twice daily with the meal'). Its lower intrinsic affinity to the receptor (about 100fold lower than that of adrenaline) can be offset by increasing the absolute amount applied.

In practical pharmacotherapy, a drug's metabolism and elimination are of equal importance as its specific mecha-nism of action. There are several reasons for this:

1.  Drugs may be extensively metabolized in the liver. Since all orally applied drugs are passed through the liv-er before reaching the systemic circulation, this can lead to impractically low effective levels at the relevant target site. Example: Remikiren (above).

2.  Sometimes, the metabolic products are more active than the parent drug, or they may have poisonous effects that were not observed with the parent compound itself3.

3.  Diseases – or concomitant use of other drugs – may significantly change the rate of metabolism and thereby change the bioavailability of the drug, leading to loss of desired effects or unacceptably severe side effects.

In the foregoing, we have seen several examples of one frequently used approach to drug development: The struc-ture of a physiological mediator is used as a starting point; a large number of variants are synthesized, and from the pool of variants those with the desired agonistic or antag-onistic properties are `screened' using appropriate in vitro assays and animal experiments. This approach does not al-ways work. Below are some examples of other successful approaches to drug development. You will note that some of these are not completely general either.