Two unique COX isozymes convert AA into prostaglandin endoperoxides. PGH synthase-1 (COX-1) is expressed constitu-tively in most cells. In contrast, PGH synthase-2 (COX-2) is inducible; its expression varies depending on the stimulus. COX-2 is an immediate early-response gene product that is markedlyup-regulated by shear stress, growth factors, tumor promoters, and cytokines. COX-1 generates prostanoids for “housekeeping” such as gastric epithelial cytoprotection, whereas COX-2 is the major source of prostanoids in inflammation and cancer. This distinc-tion is overly simplistic, however; there are both physiologic and pathophysiologic processes in which each enzyme is uniquely involved and others in which they function coordinately. For example, endothelial COX-2 is the primary source of vascular prostacyclin (PGI2), whereas renal COX-2-derived prostanoids are important for normal renal development and maintenance of function. Nonsteroidal anti-inflammatory drugs (NSAIDs;) exert their therapeutic effects through inhibition of the COXs. Indomethacin and sulindac are slightly selective for COX-1. Meclofenamate and ibuprofen are approximately equipo-tent on COX-1 and COX-2, whereas celecoxib = diclofenac < rofecoxib = lumiracoxib < etoricoxib in inhibition of COX-2 (listed in order of increasing average selectivity). Aspirin acetylates and inhibits both enzymes covalently. Low doses (< 100 mg/d) inhibit preferentially, but not exclusively, platelet COX-1, whereas higher doses inhibit both systemic COX-1 and COX-2. 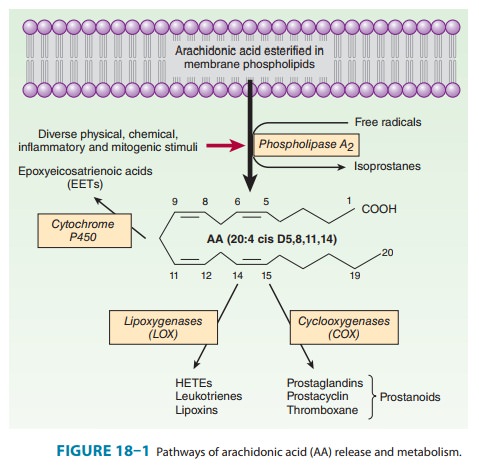 Both COX-1 and COX-2 promote the uptake of two mole-cules of oxygen by cyclization of arachidonic acid to yield a C9–C11 endoperoxide C15 hydroperoxide (Figure 18–2). This product is PGG2, which is then rapidly modified by the peroxidase moiety of the COX enzyme to add a 15-hydroxyl group that is essential for biologic activity. This product is PGH2. Both endoperoxides are highly unstable. Analogous families—PGH1 and PGH3 and all their subsequent products—are derived from homo-γ-linolenic acid and eicosapentaenoic acid, respectively. 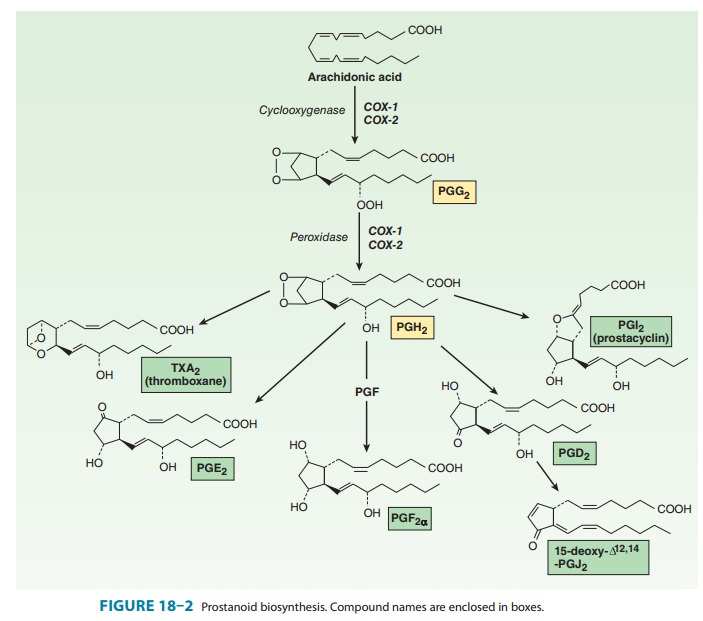 The prostaglandins, thromboxane, and prostacyclin, collec-tively termed the prostanoids, are generated from PGH2 through the action of downstream isomerases and synthases. These termi-nal enzymes are expressed in a relatively cell-specific fashion, such that most cells make one or two dominant prostanoids. The pros-taglandins differ from each other in two ways: (1) in the substitu-ents of the pentane ring (indicated by the last letter, eg, E and F in PGE and PGF) and (2) in the number of double bonds in the side chains (indicated by the subscript, eg, PGE1, PGE2). PGH2 is metabolized by prostacyclin, thromboxane, and PGF synthases (PGIS, TXAS, and PGFS) to PGI2, TXA2, and PGF2α, respec-tively. Two additional enzymes, 9,11-endoperoxide reductase and 9-ketoreductase, provide for PGF2α synthesis from PGH2 and PGE2, respectively. At least three PGE 2 synthases have been iden-tified: microsomal (m) PGES-1, the more readily inducible mPGES-2, and cytosolic PGES. There are two distinct PGDS isoforms, the lipocalin-type PGDS and the hematopoietic PGDS.Several products of the arachidonate series are of current clini-cal importance. Alprostadil (PGE1) may be used for its smooth muscle relaxing effects to maintain the ductus arteriosus patent in some neonates awaiting cardiac surgery and in the treatment of impotence. Misoprostol, a PGE1 derivative, is a cytoprotective prostaglandin used in preventing peptic ulcer and in combination with mifepristone (RU-486) for terminating early pregnancies. PGE2and PGF2are used in obstetrics to induce labor. Latanoprost and several similar compounds are topically activePGF2α derivatives used in ophthalmology to treat open-angle glaucoma. Prostacyclin (PGI2, epoprostenol) is synthesized mainly by the vascular endothelium and is a powerful vasodilator and inhibitor of platelet aggregation. It is used clinically to treat pulmonary hypertension and portopulmonary hypertension. In contrast, thromboxane (TXA2) has undesirable properties (aggre-gation of platelets, vasoconstriction). Therefore TXA2-receptor antagonists and synthesis inhibitors have been developed for car-diovascular indications, although these (except for aspirin) have yet to establish a place in clinical usage. All the naturally occurring COX products undergo rapid metabolism to inactive products either by hydration (for PGI 2 and TXA2) or by oxidation of the key 15-hydroxyl group to the cor-responding ketone by prostaglandin 15-hydroxy prostaglandin dehydrogenase (15-PGDH) after cellular uptake via an organic anion transporter polypeptide (OATP 2A1). Further metabolism is by 13 reduction, β-oxidation, and ω-oxidation. The inactive metabolites can be determined in blood and urine by immunoassay or mass spectrometry as a measure of the in vivo synthesis of their parent compounds.

The metabolism of AA by the 5-, 12-, and 15-lipoxygenases (LOX) results in the production of hydroperoxyeicosatetraenoic acids (HPETEs), which rapidly convert to hydroxy derivatives (HETEs) and leukotrienes (Figure 18–3). The most actively investigated leu-kotrienes are those produced by the 5-LOX present in leukocytes (neutrophils, basophils, eosinophils, and monocyte-macrophages) and other inflammatory cells such as mast cells and dendritic cells. This pathway is of great interest since it is associated with asthma, anaphylactic shock, and cardiovascular disease. Stimulation of these cells elevates intracellular Ca2+ and releases arachidonate; incorporation of molecular oxygen by 5-LOX, in association with 5-LOX-activating protein (FLAP), then yields the unstableepoxide leukotriene A4 (LTA4). This intermediate is either con-verted to the dihydroxy leukotriene B4 (LTB4), via the action of LTA4 hydrolase, or is conjugated with glutathione to yield leukot-riene C4 (LTC4), by LTC4 synthase. Sequential degradation of the glutathione moiety by peptidases yields LTD4 and LTE4. These three products, LTC4, D4, and E4, are called cysteinyl leukot-rienes. Although leukotrienes are predominantly generated in leukocytes, non-leukocyte cells (eg, endothelial cells) that express enzymes downstream of 5-LOX/FLAP can take up and convert leukocyte-derived LTA4 in a process termed transcellular biosyn-thesis. Transcellular formation of prostaglandins has also been shown; for example, endothelial cells can use platelet PGH2 to form PGI2. 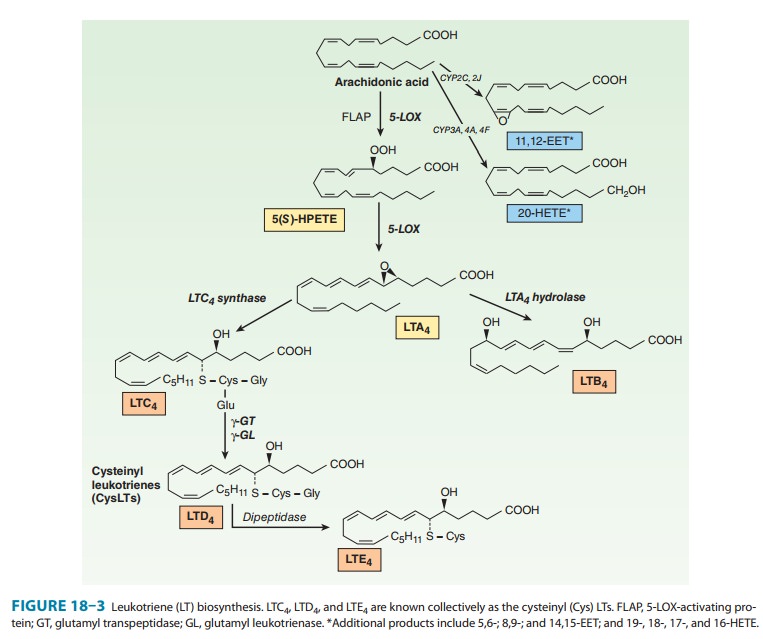 LTC4and LTD4are potent bronchoconstrictors and are recog-nized as the primary components of the slow-reacting substanceof anaphylaxis (SRS-A) that is secreted in asthma and anaphy-laxis. There are four current approaches to antileukotriene drug development: 5-LOX enzyme inhibitors, leukotriene-receptor antagonists, inhibitors of FLAP, and phospholipase A2 inhibitors.

LTA4, the primary product of 5-LOX, can be converted with appropriate stimulation via 12-LOX in platelets to the lipoxins LXA4 and LXB4 in vitro. These mediators can also be generated through 5-LOX metabolism of 15-HETE, the product of 15-LOX-2 metabolism of arachidonic acid. 15-LOX-1 prefers linoleic acid as a substrate forming 15S-hydroxyoctadecadienoic acid. The stereochemical isomer, 15( R )-HETE, may be derived from the action of aspirin-acetylated COX-2 and further trans-formed in leukocytes by 5-LOX to 15-epi-LXA4 or 15-epi-LXB4, the so-called aspirin-triggered lipoxins. Synthetic lipoxins and epi-lipoxins exert anti-inflammatory actions when applied in vivo. Although these compounds can be formed from endoge-nous substrates in vitro and when synthesized may have potent biologic effects, the importance of the endogenous compounds in vivo in human biology remains ill defined. 12-HETE, a product of 12-LOX, can also undergo a catalyzed molecular rearrange-ment to epoxyhydroxyeicosatrienoic acids called hepoxilins. Proinflammatory effects of synthetic hepoxilins have been reported although their biologic relevance is unclear.

The LOXs located in epidermal cells are distinct from “conven-tional” enzymes—arachidonic acid and linoleic acid are appar-ently not the natural substrates for epidermal LOX. Epidermal accumulation of 12(R )-HETE is a feature of psoriasis and ich-thyosis and inhibitors of 12(R )-LOX are under investigation for the treatment of these proliferative skin disorders.

Specific isozymes of microsomal cytochrome P450 monooxyge-nases convert AA to hydroxy- or epoxyeicosatrienoic acids (Figures 18–1 and 18–3). The products are 20-HETE, generated by the CYP hydroxylases (CYP3A, 4A, 4F) and the 5,6-, 8,9-, 11,12-, and 14,15-epoxyeicosatrienoic acids (EETs), which arise from the CYP epoxygenase (2J, 2C). Their biosynthesis can be altered by pharmacologic, nutritional, and genetic factors that affect P450 expression. The biologic actions of the EETs are reduced by their conversion to the corresponding, and biologically less active, dihy-droxyeicosatrienoic acids (DHETs) through the action of soluble epoxide hydrolase (sEH). Unlike the prostaglandins, the EETs can be esterified into phospholipids, which then act as storage sites. Intracellular fatty acid-binding proteins promote EET uptake into cells, incorporation into phospholipids, and availability to sEH. EETs are synthesized in endothelial cells and cause vasodilation in a number of vascular beds by activating the smooth muscle large conductance Ca2+-activated K+ channels. This results in smooth muscle cell hyperpolarization and vasodilation, leading to reduced blood pressure. Substantial evidence indicates that EETs may function as endothelium-derived hyperpolarizing factors, par-ticularly in the coronary circulation. Consequently there is interest in inhibitors of soluble sEH as potential antithrombotic and antihypertensive drugs. An exception to the general response to EETs as vasodilators is the pulmonary vasculature where they cause vasoconstriction. It is unclear yet whether this activity of EETs may limit the potential clinical use of sEH inhibitors. Down-regulation of pulmonary sEH may contribute to pulmonary hypertension. Anti-inflammatory, antiapoptotic, and proangio-genic actions of the EETs have also been reported.

The isoeicosanoids, a family of eicosanoid isomers, are formed nonenzymatically by direct free radical-based action on AA and related lipid substrates. Isoprostanes are prostaglandin stereoiso-mers. Because prostaglandins have many asymmetric centers, they have a large number of potential stereoisomers. COX is not needed for the formation of the isoprostanes, and its inhibition with aspirin or other NSAIDs should not affect the isoprostane pathway. The primary epimerization mechanism is peroxidation of arachidonate by free radicals. Peroxidation occurs while arachi-donic acid is still esterified to the membrane phospholipids. Thus, unlike prostaglandins, these stereoisomers are “stored” as part of the membrane. They are then cleaved by phospholipases, circu-late, and are excreted in urine. Isoprostanes are present in relatively large amounts (tenfold greater in blood and urine than the COX-derived prostaglandins). They have potent vasoconstrictor effects when infused into renal and other vascular beds and may activate prostanoid receptors. They also may modulate other aspects of vascular function, including leukocyte and platelet adhesive inter-actions and angiogenesis. It has been speculated that they may contribute to the pathophysiology of inflammatory responses in a manner insensitive to COX inhibitors. A particular difficulty in assessing the likely biologic functions of isoprostanes—several of which have been shown to serve as incidental ligands at prosta-glandin receptors—is that while high concentrations of individual isoprostanes may be necessary to elicit a response, multiple com-pounds are formed coincidentally in vivo under conditions of oxidant stress. Analogous leukotriene and EET isomers have been described.