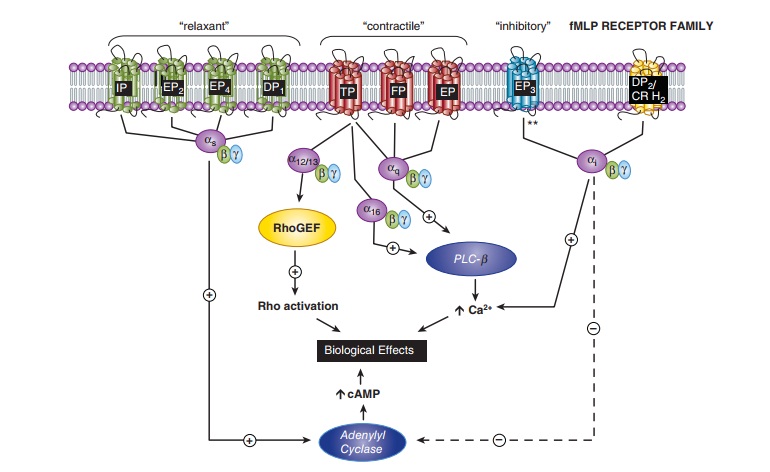 As a result of their short half-lives, the eicosanoids act mainly in an autocrine and a paracrine fashion, ie, close to the site of their synthesis, and not as circulating hormones.

As a result of their short half-lives, the eicosanoids act mainly in an autocrine and a paracrine fashion, ie, close to the site of their synthesis, and not as circulating hormones. These ligands bind to receptors on the cell surface, and pharmacologic specificity is determined by receptor density and type on different cells (Figure 18–4). A single gene product has been identified for the PGI2 (IP), PGF2α (FP), and TXA2 (TP) receptors, while four dis-tinct PGE2 receptors (EPs 1–4) and two PGD2 receptors (DP1 and 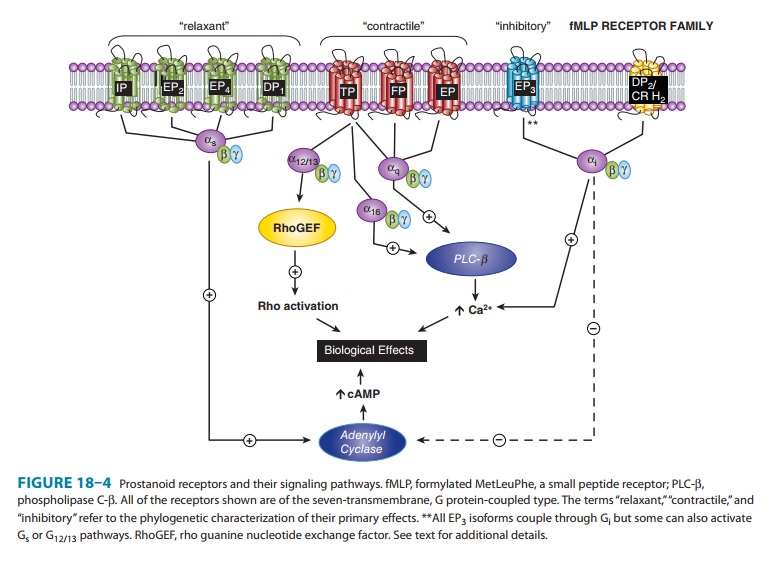 DP2) have been cloned. Additional isoforms of the human TP (α and β), FP (A and B), and EP3 (I, II, III, IV, V, VI, e, and f ) recep-tors can arise through differential mRNA splicing. Two receptors exist for both LTB4 (BLT1 and BLT2) and the cysteinyl leukot-rienes (cysLT1 and cysLT2). The formyl peptide (fMLP)-1 receptor can be activated by lipoxin A4 and consequently has been termed the ALX receptor. All of these receptors are G protein-coupled; properties of the best-studied receptors are listed in Table 18–1. 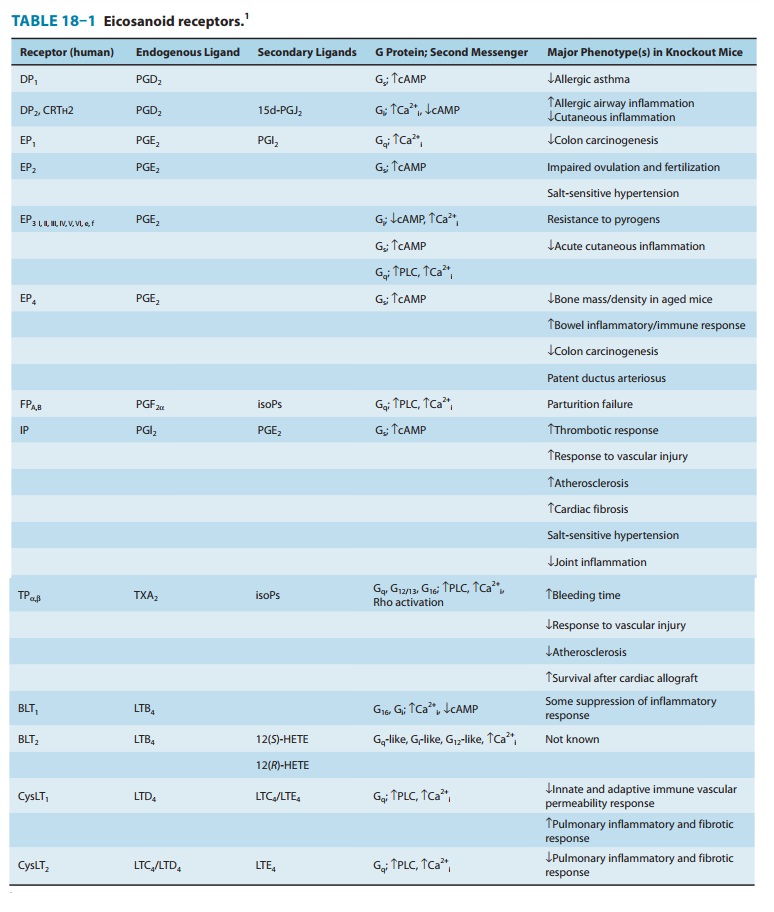 EP2, EP4, IP, and DP1 receptors activate adenylyl cyclase via Gs. This leads to increased intracellular cAMP levels, which in turn activate specific protein kinases . EP1, FP, and TP activate phosphatidylinositol metabolism, leading to the forma-tion of inositol trisphosphate, with subsequent mobilization of Ca2+ stores and an increase of free intracellular Ca2+. TP also couples to multiple G proteins, including G12/13 and G16, to stimulate small G protein signaling pathways, and may activate or inhibit adenylyl cyclase via Gs (TPα) or Gi (TPβ), respectively. EP3 isoforms can couple to both elevation of intracellular calcium and to increased or decreased cAMP. The DP 2 receptor (also known as the chemoattractant receptor-homologous molecule expressed on TH2 cells, or CRTH2), which is unrelated to the other prostanoid receptors, is a member of the fMLP (formylated MetLeuPhe) receptor superfamily. This receptor couples througha Gi-type G protein and leads to inhibition of cAMP synthesis and increases in intracellular Ca2+ in a variety of cell types.

LTB4 also causes inositol trisphosphate release via the BLT1 receptor, causing activation, degranulation, and superoxide anion generation in leukocytes. The BLT2 receptor, a low-affinity recep-tor for LTB4, is also bound with reasonable affinity by 12(S )- and 12(R )-HETE, although the biologic relevance of this observation is not clear. CysLT1 and cysLT2 couple to Gq, leading to increased intracellular Ca2+. Studies have also placed Gi downstream of cysLT2. An orphan receptor, GPR17, binds cysLTs and may nega-tively regulate the function of cysLT1, but its physiologic role remains ill defined. As noted above, the EETs promote vasodila-tion via paracrine activation of calcium-activated potassium chan-nels on smooth muscle cells leading to hyperpolarization and relaxation. This occurs in a manner consistent with activation of a Gs-coupled receptor, although a specific EET receptor has yet to be identified. EETs may also act in an autocrine manner directly activating endothelial transient receptor potential channels to cause endothelial hyperpolarization, which is then transferred to the smooth muscle cells by gap junctions or potassium ions. Specific receptors for isoprostanes have not been identified, and the biologic importance of their capacity to act as incidental ligands at prostaglandin receptors remains to be established.

Although prostanoids can activate peroxisome proliferator-activated receptors (PPARs) if added in sufficient concentration in vitro, it remains questionable whether these compounds attain concentrations sufficient to function as endogenous nuclear-receptor ligands in vivo.