The symptoms of hyperthyroidism are obvious from the preceding discussion of the physiology of the thyroid hormones:

The symptoms of hyperthyroidism are obvious from the preceding discussion of the physiology of the thyroid hormones: (1) a high state of excitability, (2) intolerance to heat, (3) increased sweating, (4) mild to extreme weight loss (sometimes as much as 100 pounds), (5) varying degrees of diarrhea, (6) muscle weakness, (7) nervousness or other psychic disorders, (8) extreme fatigue but inability to sleep, and (9) tremor of the hands.

Exophthalmos. Most people with hyperthyroidismdevelop some degree of protrusion of the eyeballs, as shown in Figure 76–8. This condition is called exoph-thalmos. A major degree of exophthalmos occurs inabout one third of hyperthyroid patients, and the con-dition sometimes becomes so severe that the eyeball protrusion stretches the optic nerve enough to damage vision. Much more often, the eyes are damaged because the eyelids do not close completely when the person blinks or is asleep. As a result, the epithelial surfaces of the eyes become dry and irritated and often infected, resulting in ulceration of the cornea. 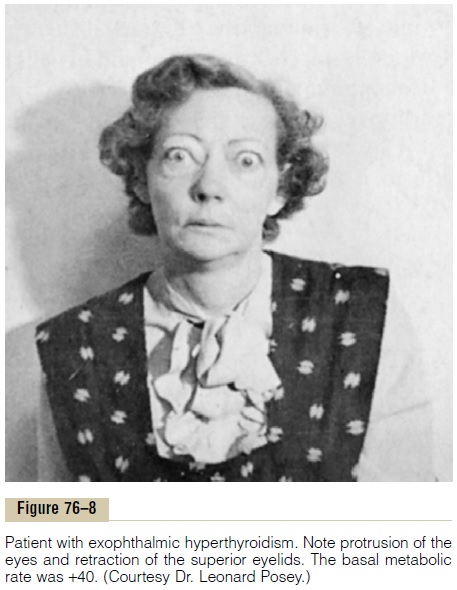 The cause of the protruding eyes is edematous swelling of the retro-orbital tissues and degenerative changes in the extraocular muscles. In most patients, immunoglobulins can be found in the blood that react with the eye muscles. Furthermore, the concentration of these immunoglobulins is usually highest in patients who have high concentrations of TSIs. Therefore, there is much reason to believe that exophthalmos, like hyper-thyroidism itself, is an autoimmune process. The exophthalmos usually is greatly ameliorated with treatment of the hyperthyroidism.

Diagnostic Tests for Hyperthyroidism. For the usual case ofhyperthyroidism, the most accurate diagnostic test is direct measurement of the concentration of “free” thy-roxine (and sometimes triiodothyronine) in the plasma, using appropriate radioimmunoassay procedures.

Other tests that are sometimes used are as follows:

1.  The basal metabolic rate is usually increased to +30 to +60 in severe hyperthyroidism.

2.  The concentration of TSH in the plasma is measured by radioimmunoassay. In the usual type of thyrotoxicosis, anterior pituitary secretion of TSH is so completely suppressed by thelarge amounts of circulating thyroxine and triiodothyronine that there is almost no plasma TSH.

3.  The concentration of TSI is measured by radioimmunoassay. This is usually high in thyrotoxicosis but low in thyroid adenoma.

Physiology of Treatment in Hyperthyroidism. The most directtreatment for hyperthyroidism is surgical removal of most of the thyroid gland. In general, it is desirable to prepare the patient for surgical removal of the gland before the operation. This is done by administering propylthiouracil, usually for several weeks, until the basal metabolic rate of the patient has returned to normal. Then, administration of high concentrations of iodides for 1 to 2 weeks immediately before operation causes the gland itself to recede in size and its blood supply to diminish. By using these preoperative proce-dures, the operative mortality is less than 1 in 1000 in the better hospitals, whereas before development of modern procedures, operative mortality was 1 in 25.

Treatment of the Hyperplastic Thyroid Gland with Radioactive Iodine

Eighty to 90 per cent of an injected dose of iodide is absorbed by the hyperplastic, toxic thyroid gland within 1 day after injection. If this injected iodine is radio-active, it can destroy most of the secretory cells of the thyroid gland. Usually 5 millicuries of radioactive iodine is given to the patient, whose condition is reassessed several weeks later. If the patient is still hyperthyroid, additional doses are administered until normal thyroid status is reached.