To maintain normal levels of metabolic activity in the body, precisely the right amount of thyroid hormone must be secreted at all times; to achieve this, specific feedback mechanisms operate through the hypothalamus and anterior pituitary gland to control the rate of thyroid secretion.

To maintain normal levels of metabolic activity in the body, precisely the right amount of thyroid hormone must be secreted at all times; to achieve this, specific feedback mechanisms operate through the hypothalamus and anterior pituitary gland to control the rate of thyroid secretion. These mechanisms are as follows.

TSH (from the Anterior Pituitary Gland) Increases Thyroid Secre-tion. TSH, also known asthyrotropin, is an anteriorpituitary hormone, a glycoprotein with a molecular weight of about 28,000. This hormone increases the secretion of thyroxine and triiodothyronine by the thyroid gland. Its specific effects on the thyroid gland are as follows:

1. Increased proteolysis of the thyroglobulin thathas already been stored in the follicles, with resultant release of the thyroid hormones into the circulating blood and diminishment of the follicular substance itself

2. Increased activity of the iodide pump, whichincreases the rate of “iodide trapping” in the glandular cells, sometimes increasing the ratio of intracellular to extracellular iodide concentration in the glandular substance to as much as eight times normal

4. Increased size and increased secretory activity of the thyroid cells

5. Increased number of thyroid cells plus a changefrom cuboidal to columnar cells and much infolding of the thyroid epithelium into the follicles

In summary, TSH increases all the known secretory activities of the thyroid glandular cells.

The most important early effect after administration of TSH is to initiate proteolysis of the thyroglobulin, which causes release of thyroxine and triiodothyro-nine into the blood within 30 minutes. The other effects require hours or even days and weeks to develop fully.

Cyclic Adenosine Monophosphate Mediates the Stimulatory Effect of TSH. In the past, it was difficult to explain themany and varied effects of TSH on the thyroid cell. It is now clear that most, if not all, of these effects result from activation of the “second messenger” cyclicadenosine monophosphate (cAMP) system of the cell.

The first event in this activation is binding of TSH with specific TSH receptors on the basal membrane surfaces of the thyroid cell. This then activates adeny-lyl cyclase in the membrane, which increases the for-mation of cAMP inside the cell. Finally, the cAMP acts as a second messenger to activate protein kinase, which causes multiple phosphorylations throughout the cell. The result is both an immediate increase in secretion of thyroid hormones and prolonged growth of the thyroid glandular tissue itself.

This method for control of thyroid cell activity is similar to the function of cAMP as a “second messen-ger” in many other target tissues of the body.

The molecular mechanism by which TRH causes the TSH-secreting cells of the anterior pituitary to produce TSH is first to bind with TRH receptors in the pituitary cell membrane.This in turn activates the phos-pholipase second messenger system inside the pituitarycells to produce large amounts of phospholipase C, fol-lowed by a cascade of other second messengers, including calcium ions and diacyl glycerol, which even-tually leads to TSH release.

Effects of Cold and Other Neurogenic Stimuli on TRH and TSH Secretion. One of the best-known stimuli for increas-ing the rate of TRH secretion by the hypothalamus, and therefore TSH secretion by the anterior pituitary gland, is exposure of an animal to cold. This effect almost certainly results from excitation of the hypo-thalamic centers for body temperature control. Exposure of rats for several weeks to severe cold increases the output of thyroid hormones sometimes to more than 100 per cent of normal and can increase the basal metabolic rate as much as 50 per cent. Indeed, persons moving to arctic regions have been known to develop basal metabolic rates 15 to 20 per cent above normal.

Various emotional reactions can also affect the output of TRH and TSH and therefore indirectly affect the secretion of thyroid hormones. Excitement and anxiety—conditions that greatly stimulate the sympathetic nervous system—cause an acute decrease in secretion of TSH, perhaps because these states increase the metabolic rate and body heat and there-fore exert an inverse effect on the heat control center.

Neither these emotional effects nor the effect of cold is observed after the hypophysial stalk has been cut, demonstrating that both of these effects are medi-ated by way of the hypothalamus. 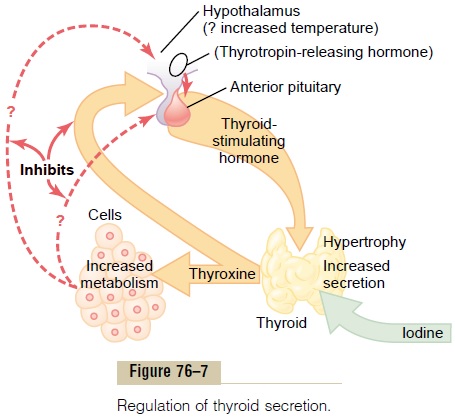 Drugs that suppress thyroid secretion are called antithy-roid substances. The best known of these substances are thiocyanate, propylthiouracil, and high concentrationsof inorganic iodides. The mechanism by which each of these blocks thyroid secretion is different from the others, and they can be explained as follows.

Thiocyanate Ions Decrease Iodide Trapping. The same activepump that transports iodide ions into the thyroid cells can also pump thiocyanate ions, perchlorate ions, and nitrate ions. Therefore, the administration of thio-cyanate (or one of the other ions as well) in high enough concentration can cause competitive inhibition of iodide transport into the cell— that is, inhibition of the iodide-trapping mechanism.

The decreased availability of iodide in the glandular cells does not stop the formation of thyroglobulin; it merely prevents the thyroglobulin that is formed from becoming iodinated and therefore from forming the thyroid hormones. This deficiency of the thyroid hor-mones in turn leads to increased secretion of TSH by the anterior pituitary gland, which causes overgrowth of the thyroid gland even though the gland still does not form adequate quantities of thyroid hormones. There-fore, the use of thiocyanates and some other ions to block thyroid secretion can lead to development of a greatly enlarged thyroid gland, which is called a goiter.

Propylthiouracil Decreases Thyroid Hormone Formation. Propy-lthiouracil (and other, similar compounds, such as methimazole and carbimazole) prevents formation of thyroid hormone from iodides and tyrosine. The mech-anism of this is partly to block the peroxidase enzyme that is required for iodination of tyrosine and partly to block the coupling of two iodinated tyrosines to form thyroxine or triiodothyronine.

Propylthiouracil, like thiocyanate, does not prevent formation of thyroglobulin. The absence of thyroxine and triiodothyronine in the thyroglobulin can lead to tremendous feedback enhancement of TSH secretion by the anterior pituitary gland, thus promoting growth of the glandular tissue and forming a goiter.

Iodides in High Concentrations Decrease Thyroid Activity and Thyroid Gland Size. When iodides are present in the bloodin high concentration (100 times the normal plasma level), most activities of the thyroid gland are decreased, but often they remain decreased for only a few weeks. The effect is to reduce the rate of iodide trapping, so that the rate of iodination of tyrosine to form thyroid hormones is also decreased. Even more important, the normal endocytosis of colloid from the follicles by the thyroid glandular cells is paralyzed by the high iodide concentrations. Because this is the first step in release of the thyroid hormones from the storage colloid, there is almost immediate shutdown of thyroid hormone secretion into the blood.