Endemic Colloid Goiter Caused by Dietary Iodide Deficiency. Theterm “goiter” means a greatly enlarged thyroid gland. As pointed out in the discussion of iodine metabolism, about 50 milligrams of iodine are required each year for the formation of adequate quantities of thyroid hormone. In certain areas of the world, notably in the Swiss Alps, the Andes, and the Great Lakes region of the United States, insufficient iodine is present in the soil for the foodstuffs to contain even this minute quan-tity. Therefore, in the days before iodized table salt, many people who lived in these areas developed extremely large thyroid glands, called endemic goiters.

The mechanism for development of large endemic goiters is the following: Lack of iodine prevents pro-duction of both thyroxine and triiodothyronine. As a result, no hormone is available to inhibit production of TSH by the anterior pituitary; this causes the pituitary to secrete excessively large quantities of TSH. The TSH then stimulates the thyroid cells to secrete tremendous amounts of thyroglobulin colloid into the follicles, and the gland grows larger and larger. But because of lack of iodine, thyroxine and triiodothyronine production does not occur in the thyroglobulin molecule and there-fore does not cause the normal suppression of TSH pro-duction by the anterior pituitary. The follicles become tremendous in size, and the thyroid gland may increase to 10 to 20 times normal size.

Idiopathic Nontoxic Colloid Goiter. Enlarged thyroid glandssimilar to those of endemic colloid goiter can also occur in people who do not have iodine deficiency. These goitrous glands may secrete normal quantities of thyroid hormones, but more frequently, the secretion of hormone is depressed, as in endemic colloid goiter.

The exact cause of the enlarged thyroid gland in patients with idiopathic colloid goiter is not known, but most of these patients show signs of mild thyroiditis; therefore, it has been suggested that the thyroiditis causes slight hypothyroidism, which then leads to increased TSH secretion and progressive growth of the noninflamed portions of the gland. This could explain why these glands usually are nodular, with some por-tions of the gland growing while other portions are being destroyed by thyroiditis.

In some persons with colloid goiter, the thyroid gland has an abnormality of the enzyme system required for formation of the thyroid hormones. Among the abnor-malities often encountered are the following:

1.Deficient iodide-trapping mechanism, in whichiodine is not pumped adequately into the thyroid cells

2.Deficient peroxidase system, in which the iodidesare not oxidized to the iodine state

3.Deficient coupling of iodinated tyrosines in the thyroglobulin molecule, so that the final thyroidhormones cannot be formed

4.Deficiency of the deiodinase enzyme, whichprevents recovery of iodine from the iodinated tyrosines that are not coupled to form the thyroid hormones (this is about two thirds of the iodine),

Physiologic Characteristics of Hypothyroidism. Whetherhypothyroidism is due to thyroiditis, endemic colloid goiter, idiopathic colloid goiter, destruction of the thyroid gland by irradiation, or surgical removal of the thyroid gland, the physiologic effects are the same. They include fatigue and extreme somnolence with sleeping up to 12 to 14 hours a day, extreme muscular sluggish-ness, slowed heart rate, decreased cardiac output, decreased blood volume, sometimes increased body weight, constipation, mental sluggishness, failure of many trophic functions in the body evidenced by depressed growth of hair and scaliness of the skin, development of a froglike husky voice, and, in severe cases, development of an edematous appearance throughout the body called myxedema. 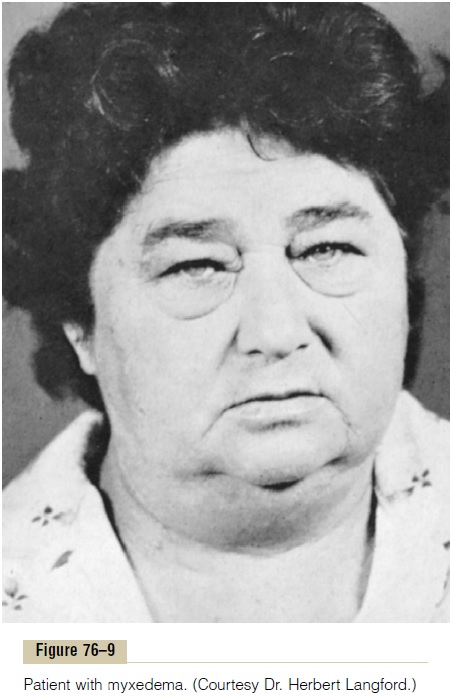 Myxedema. Myxedemadevelops in the patient withalmost total lack of thyroid hormone function. Figure 76–9 shows such a patient, demonstrating bagginess under the eyes and swelling of the face. In this condition, for reasons not explained, greatly increased quantities of hyaluronic acid and chondroitin sulfate bound with protein form excessive tissue gel in the interstitial spaces, and this causes the total quantity of interstitial fluid to increase. Because of the gel nature of the excess fluid, it is mainly immobile, and the edema is the nonpitting type.

Diagnostic Tests in Hypothyroidism. The tests alreadydescribed for diagnosis of hyperthyroidism give oppo-site results in hypothyroidism. The free thyroxine in the blood is low. The basal metabolic rate in myxedema ranges between -30 and -50. And the secretion of TSH by the anterior pituitary when a test dose of TRH is administered is usually greatly increased (except in those rare instances of hypothyroidism caused by depressed response of the pituitary gland to TRH). 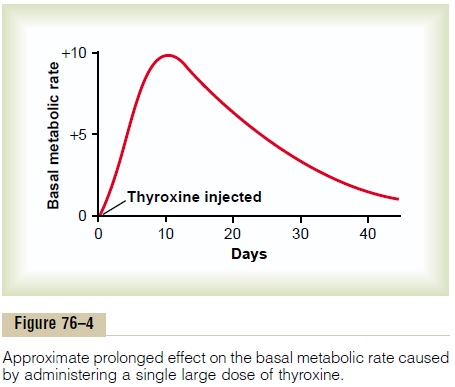 Treatment of Hypothyroidism. Figure 76–4 shows the effectof thyroxine on the basal metabolic rate, demonstrating that the hormone normally has a duration of action of more than 1 month. Consequently, it is easy to maintain a steady level of thyroid hormone activity in the body by daily oral ingestion of a tablet or more containing thyroxine. Furthermore, proper treatment of the hypothyroid patient results in such complete normality that formerly myxedematous patients have lived into their 90s after treatment for more than 50 years.