Control of Heart Rhythmicity and Impulse Conduction by the Cardiac Nerves: The Sympathetic and Parasympathetic Nerves

Control of Heart Rhythmicity and Impulse Conduction by the Cardiac Nerves: The Sympathetic and Parasympathetic Nerves

Parasympathetic (Vagal) Stimulation Can Slow or Even Block Cardiac Rhythm and Conduction—“Ventricular Escape.”

Stimulation of the parasympathetic nerves to the heart (the vagi) causes the hormone acetylcholine to be released at the vagal endings. This hormone has two major effects on the heart. First, it decreases the rate of rhythm of the sinus node, and second, it decreases the excitability of the A-V junctional fibers between the atrial musculature and the A-V node, thereby slowing transmission of the cardiac impulse into the ventricles.

Weak to moderate vagal stimulation slows the rate of heart pumping, often to as little as one half normal. And strong stimulation of the vagi can stop completely the rhythmical excitation by the sinus node or block completely transmission of the cardiac impulse from the atria into the ventricles through the A-V mode. In either case, rhythmical excitatory signals are no longer transmitted into the ventricles. The ventricles stop beating for 5 to 20 seconds, but then some point in the Purkinje fibers, usually in the ventricular septal portion of the A-V bundle, develops a rhythm of its own and causes ventricular contraction at a rate of 15 to 40 beats per minute. This phenomenon is called ventricular escape. 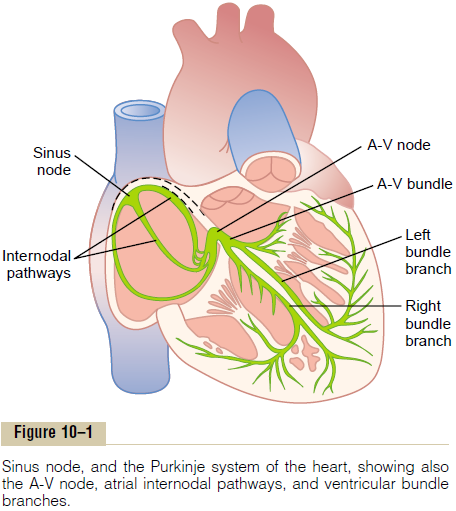 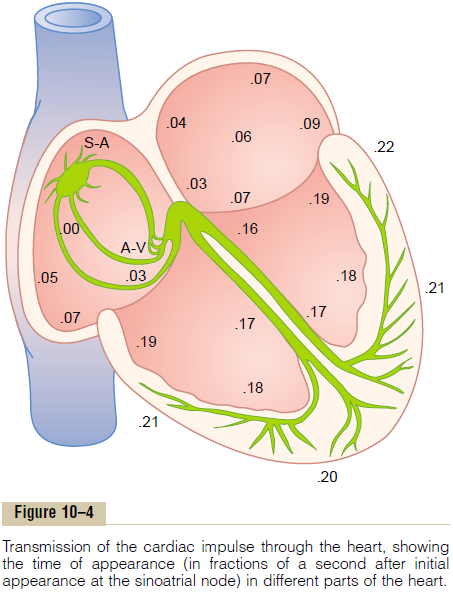 Mechanism of the Vagal Effects. The acetylcholinereleased at the vagal nerve endings greatly increases the permeability of the fiber membranes to potassium ions, which allows rapid leakage of potassium out of the conductive fibers. This causes increased negativity inside the fibers, an effect calledhyperpolarization, which makes this excitable tissue much less excitable.

In the sinus node, the state of hyperpolarization decreases the “resting” membrane potential of the sinus nodal fibers to a level considerably more nega-tive than usual, to -65 to -75 millivolts rather than the normal level of -55 to -60 millivolts. Therefore, the initial rise of the sinus nodal membrane potential caused by inward sodium and calcium leakage requires much longer to reach the threshold potential for excitation. This greatly slows the rate of rhythmic-ity of these nodal fibers. If the vagal stimulation is strong enough, it is possible to stop entirely the rhyth-mical self-excitation of this node.

In the A-V node, a state of hyperpolarization caused by vagal stimulation makes it difficult for the small atrial fibers entering the node to generate enough elec-tricity to excite the nodal fibers. Therefore, the safetyfactor for transmission of the cardiac impulse throughthe transitional fibers into the A-V nodal fibers decreases. A moderate decrease simply delays con-duction of the impulse, but a large decrease blocks conduction entirely.

In short, sympathetic stimulation increases the overall activity of the heart. Maximal stimulation can almost triple the frequency of heartbeat and can increase the strength of heart contraction as much as twofold.

Mechanism of the Sympathetic Effect. Stimulation ofthe sympathetic nerves releases the hormone norepi-nephrine at the sympathetic nerve endings. The precisemechanism by which this hormone acts on cardiac muscle fibers is somewhat unclear, but the belief is that it increases the permeability of the fiber mem-brane to sodium and calcium ions. In the sinus node, an increase of sodium-calcium permeability causes a more positive resting potential and also causes increased rate of upward drift of the diastolic mem-brane potential toward the threshold level for self-excitation, thus accelerating self-excitation and, therefore, increasing the heart rate.

In the A-V node and A-V bundles, increased sodium-calcium permeability makes it easier for the action potential to excite each succeeding portion of the conducting fiber bundles, thereby decreasing the conduction time from the atria to the ventricles.

The increase in permeability to calcium ions is at least partially responsible for the increase in contrac-tile strength of the cardiac muscle under the influence of sympathetic stimulation, because calcium ions play a powerful role in exciting the contractile process of the myofibrils.