We learnt the types of symmetry. Now we are going to learn symmetry of figures through transformations.

We learnt the types of symmetry. Now we are going to learn symmetry of figures through transformations.

Transformation describe how geometric figures of the same shape are related to one another. Figures or shapes in a plane can be translated, reflected or rotated to get new figures. 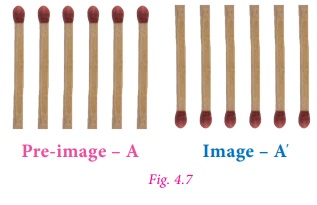 Leonardo da Vinci’s Vitruvian Man (ca. 1487) is often used as a representation of symmetry in the human body and, by extension, the natural universe.

The operation that maps or moves the pre-image onto the image is called the transformation.

A transformation is a specific set of rules that change the pre-image onto the image.

In this chapter we are going to learn three types of transformation. 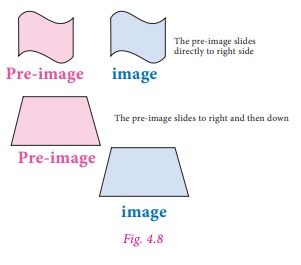 Using a grid paper, we can specify a translation by how far the shape is moved horizontally and then vertically. 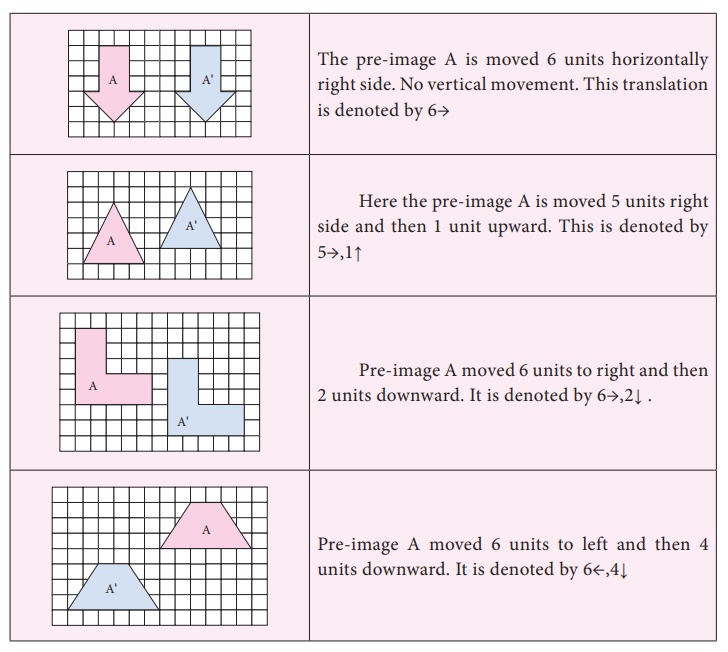 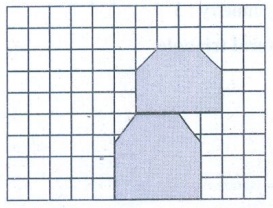 3. How is the pre–image A translated to image A’ in each of the following figures?

The pre-image and the image after a translation coincide. What can you say about the translation?

Solution:  There is no right, left, up or down movement took place. 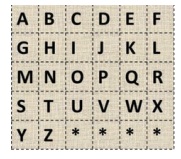 Find the new position of each point using the translation given.

How is the pre-image translated to the image?

The sights and pageantry of marching band performance can add to the excitement of a sporting event. Band members dedicate a lot of time and energy to learning the music as well as the movements required for a performance. 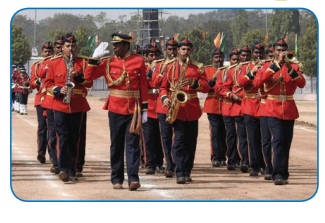 The movements of each band member as they progress throughout the show are examples of translations.

A reflection is a transformation that “flips” or “reflects” a figure about a line.

After a figure is reflected, it looks like a mirror image of itself. The line that a figure is flipped over is called a line of reflection.

We can observe reflection in water, a mirror or in a glossy surface as shown in Fig. 4.9.

We can observe that the figures and its reflections are exactly the same distance from the line of reflection on both sides.

The line of reflection may be horizontal or vertical or slanting and also it may be on the shape or outside the shape.

How to reflect a shape about a line?

To reflect the shape about the line of reflection, we have to reflect every vertex individually and then connect them again. 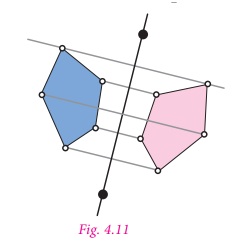 First, choose one of the vertices and draw the line through this vertex so that it is perpendicular to the line of reflection.

Now measure the distance from the vertex to the line of the reflection, and mark a point that has the same distance on the other side. It can be done by using either a ruler or a compass.

Repeat the process for all the other vertices of the shape.

Finally connect all the reflected vertices in the correct order to get the reflection of the shape.

1. Draw the line of reflection in the following pictures. 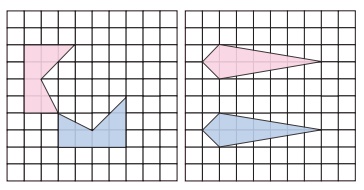 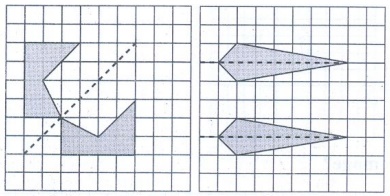 2. Reflect the shape with given line of reflection. 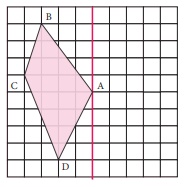 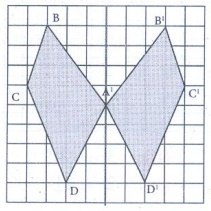 Taj Mahal at Agra is planned by following the axis with Bilateral symmetrical design in plan and overall campus as the mirror image as shown in figure. 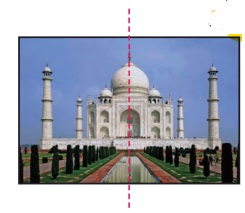 The symmetry in architecture is implied by its axiality or centrality in the form of the building. The monumental architecture often uses symmetrical design i.e. mirrored, which show stability, balance and control.

Reflect the shape in each of the following pictures with given line of reflection.

Reflect the letter about the red line. 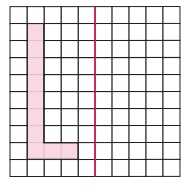 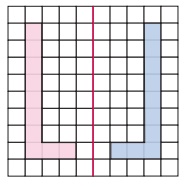 A rotation is a transformation that turns every point of the pre-image through a specified angle and direction about a point.

The default direction of a rotation is the anti-clockwise direction. The angle of rotation can be any value between 0 and 360 degrees, both are included.

● Fold a piece of paper and lable it as shown. Cut scalene triangle out of the folded paper and unfold the paper. You can see triangles in all three parts How are the triangles in parts 2 and 3 are related to triangle in part 1?

● Fold a piece of paper and lable it as shown. Cut scalene triangle out of the folded paper and unfold the paper. You can see triangles in all four parts. How are the triangles in part 2, part 3 and part 4 are related to triangle in part 1?

How to rotate a shape about a point?

To rotate a shape about a point with the given angle, we have to rotate every vertex individually and connect them again.

Here ΔABC is rotated about O with angle of 100°.

Step1. Draw CO. Make angle of 100° with vertex C and side CO using a protractor.

Step2. Use a compass to construct CO’ = CO 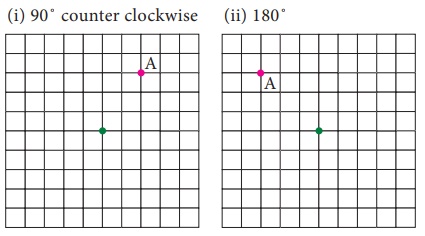 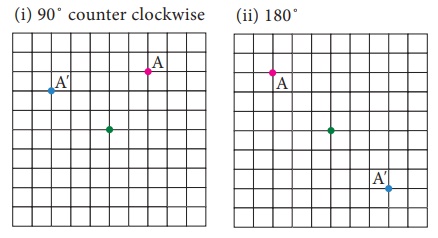 Describe the transformation involved in the following pair of figures. Write translation, reflection or rotation.