Learning Objectives ● To recall the types of symmetry through diagrams. ● To learn symmetry through transformation (Translation, reflection and rotation). ● To construct circles and concentric circles.

● To recall the types of symmetry through diagrams.

● To learn symmetry through transformation (Translation, reflection and rotation).

● To construct circles and concentric circles.

In class VI we have learnt the concept of symmetry. Now we shall recall them. 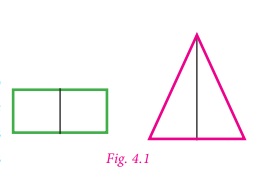 In each figure a line divides the figure into two identical halves. Such figures are symmetrical about the line. The line that divides any figure into two equal halves such that each half exactly coincides with the other is known as the line of symmetry or axis of symmetry.

1. Can you draw a shape which has no line of symmetry?

2. Draw all possible lines of symmetry for the following shapes.

What can you say about the number of lines of symmetry of a circle?

Solution:  A circle has infinite number of lines of symmetry.

When an object is seen in a mirror, the image obtained on the other side of the mirror is called its reflection.

The following shapes are examples of reflectional symmetry.

The reflected shape will be exactly the same as the original, the same distance from the mirror line and the same size. While dealing with mirror reflection, care is needed to note down the left-right changes in the orientation.

Will the figure be symmetric about both the diagonals?

Solution:  Yes, it is symmetric about both the diagonals. 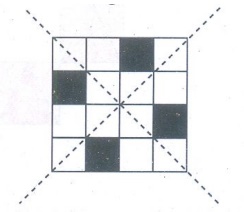 The work of artist Leonardo da Vinci has an unusual characteristic. His hand writing is a mirror image of normal handwriting.

An object is said to have a rotational symmetry if it looks the same after being rotated about its centre through an angle less than 360°.

When an object rotates around a fixed axis if its appearance of size and shape does not change then the object is supposed to be rotationally symmetrical.

Rotational symmetry can be observed in the following Fig. 4.4

The total number of times a figure coincides with itself in one complete rotation is called the order of rotational symmetry. We can only rotate the figure up to 360 degrees.

1. Find the order of rotational symmetry of the following figures.

2. Find the order of rotational symmetry for an equilateral triangle. 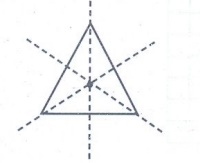 For an equilateral triangle order of rotation symmetry is 3.

Can a parallelogram have a rotational symmetry?

Yes, order of rotational symmetry is 2.

An image has translational Symmetry if it can be divided by straight lines into a sequence of identical figures. Translational symmetry results from moving a figure to a certain distance in a certain direction.

Thus, translation symmetry occurs when a pattern slides to a new position. The sliding movement involves neither rotation nor reflection. 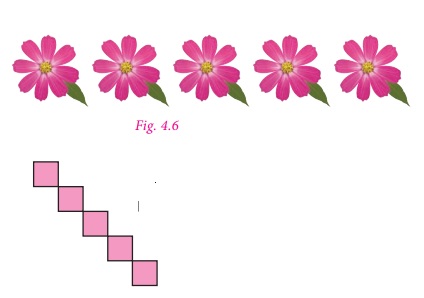 Using translational symmetry make new patterns with the given figure. 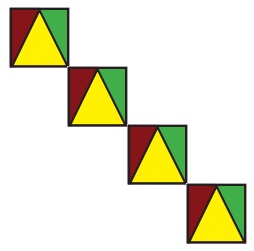 Symmetry is a fundamental part of geometry, nature, and shapes. It creates patterns that help us to recognize the beauty of the nature. An object exhibits symmetry if it looks the same after a transformation, such as reflection or rotation.

Symmetry is the underlying mathematical principle behind all patterns. Symmetry plays a significant role in the field of Arts, Sciecne and architecture. We learnt the concept of symmetry in class VI.

Now we are going to learn symmetry through transformations. Transformations describe how geometric figures of the same shape are related to one another.

This concept is a necessary mental tool to be able to analyse mathematical situations. It enables students to make up rules and patterns, make explorations, be more motivated to do better works and gain rich experiences by doing maths.