Construction of circles and concentric circles

Construction of circles and concentric circles

In previous term we have learnt to find the area and the circumference of a circle. Now we can learn more about circles.

The collection of all the points in a plane, which are at a fixed distance from a fixed point in the plane, is called a circle. 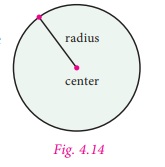 If two points on a circle are joined by a line segment, then the line segment is called a chord of the circle. Since there are many points on the circles, any number of chords can be drawn in a circle.

As in the case of radius, the word ‘diameter’ is also used in two senses, that is, as a line segment and also as its length.

It can be easily verified that the diameter is the longest chord and all diameters have the same length. The diameter is equal to two times the radius.

Now let us learn to construct circle with given radius and diameter.

Example Construct a circle of radius 5 cm with centre O.

Step 2: Extend the compass distance equal to the radius 5 cm

Step 3: At center O, Hold the compass firmly and place the pointed end of the compass.

Step 4: Slowly rotate the compass around to get the circle. 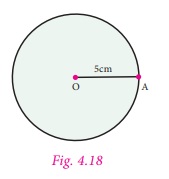 Circles drawn in a plane with a common centre and different radii are called concentric circles (Fig. 4.19).

The area between the two concentric circles is known as circular ring (Fig. 4.20). 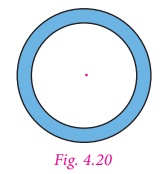 Step 1: Draw a rough diagram and mark the given measurements.

Step 2: Take any point O and mark it as the centre.

Thus the concentric circles C1 and C2 are drawn. 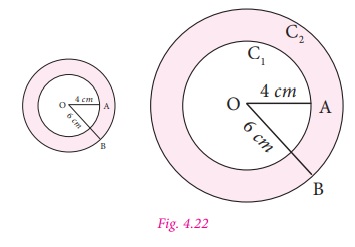