2 The Use of Symbol Tables

Symbol tables are data structures that are used by compilers to hold information about source-program constructs. The information is collected incrementally by the analysis phases of a compiler and used by the synthesis phases to generate the target code. Entries in the symbol table contain information about an identifier such as its character string (or lexeme), its type, its position in storage, and any other relevant information. Symbol tables typically need to support multiple declarations of the same identifier within a program.

This section contains a symbol-table module suitable for use with the Java translator fragments in this chapter. The module will be used as is when we put together the translator in Appendix A. Meanwhile, for simplicity, the main example of this section is a stripped-down language with just the key constructs that touch symbol tables; namely, blocks, declarations, and factors. All of the other statement and expression constructs are omitted so we can focus on the symbol-table operations. A program consists of blocks with optional declara tions and  "statements"         consisting   of single identifiers. Each such statement represents a use of the identifier.    Here is a sample program in this language:

The task we shall perform is to print a revised program, in which the decla-rations have been removed and each "statement" has its identifier followed by a colon and its type.

In C,  for instance, program blocks are either functions or sections of functions that are separated    by curly braces and that have one or more declarations within them.

Symbol-table entries are created and used during the analysis phase by the lexical analyzer, the parser, and the semantic analyzer. In this chapter, we have the parser create entries. With its knowledge of the syntactic structure of a program, a parser is often in a better position than the lexical analyzer to distinguish among different declarations of an identifier.

In some cases, a lexical analyzer can create a symbol-table entry as soon as it sees the characters that make up a lexeme. More often, the lexical analyzer can only return to the parser a token, say id, along with a pointer to the lexeme. Only the parser, however, can decide whether to use a previously created symbol-table entry or create a new one for the identifier.

The term "scope of identifier really refers to the scope of a particular dec-laration of x. The term scope by itself refers to a portion of a program that is the scope of one or more declarations.

Scopes are important, because the same identifier can be declared for differ-ent purposes in different parts of a program. Common names like i and x often have multiple uses. As another example, subclasses can redeclare a method name to override a method in a superclass.

If blocks can be nested, several declarations of the same identifier can appear within a single block. The following syntax results in nested blocks when stmts can generate a block:

Optimization of Symbol Tables for Blocks

Implementations of symbol tables for blocks can take advantage of the most-closely nested rule. Nesting ensures that the chain of applicable symbol tables forms a stack. At the top of the stack is the table for the current block. Below it in the stack are the tables for the enclosing blocks. Thus, symbol tables can be allocated and deallocated in a stack-like fashion.

Some compilers maintain a single hash table of accessible entries; that is, of entries that are not hidden by a declaration in a nested block. Such a hash table supports essentially constant-time lookups, at the expense of inserting and deleting entries on block entry and exit. Upon exit from a block B, the compiler must undo any changes to the hash table due to declarations in block B. It can do so by using an auxiliary stack to keep track of changes to the hash table while block B is processed.

Moreover, a statement can be a block, so our language allows nested blocks, where an identifier can be redeclared.

The occurrence of w on line 5 is presumably within the scope of a declaration of w outside this program fragment; its subscript 0 denotes a declaration that is global or external to this block.

The most-closely nested rule for blocks can be implemented by chaining symbol tables. That is, the table for a nested block points to the table for its enclosing block. 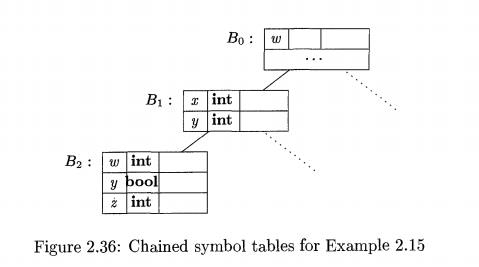 The object is chained to the environment-valued parameter p by setting  field next to p.  Although it is the Env objects that form a chain, it is convenient to talk of the tables being chained.

— The key is a string, or rather a reference to a string. We could alternatively use references to token objects for identifiers as keys.

- The value is an entry of class Symbol. The code on lines 9 through 11 does not need to know the structure of an entry; that is, the code is independent of the fields and methods in class Symbol. 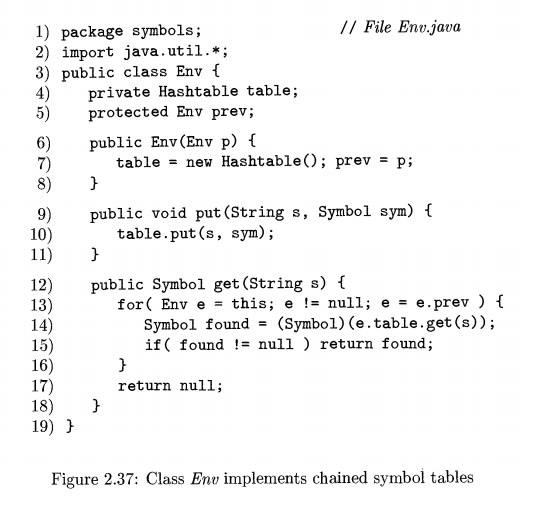 "Environment" is another term for the collection of symbol tables that are relevant at a point in the program.

• Get an entry for an identifier by searching the chain of tables, starting with the table for the current block. The code for this operation on lines 12 through 18 returns either a symbol-table entry or n u l l .

Chaining of symbol tables results in a tree structure, since more than one block can be nested inside an enclosing block. The dotted lines in Fig. 2.36 are a reminder that chained symbol tables can form a tree.

2. The Use of Symbol Tables 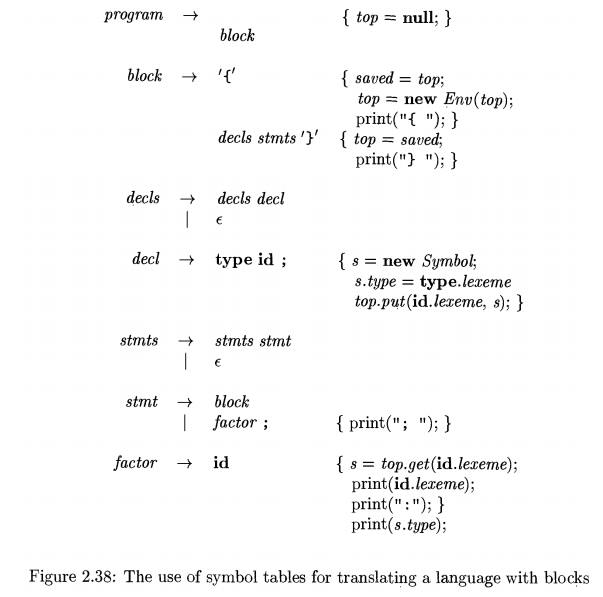 Figure 2.38: The use of symbol tables for translating a language with blocks

the translation scheme strips the declarations and produces

Notice that the bodies of the productions have been aligned in Fig. 2.38

so that all the grammar symbols appear in one column, and all the actions in a second column. As a result, components of the body are often spread over several lines.

Now, consider the semantic actions. The translation scheme creates and discards symbol tables upon block entry and exit, respectively. Variable top denotes the top table, at the head of a chain of tables. The first production of the underlying grammar is program ->• block. The semantic action before block initializes top to null, with no entries.

sets variable top to a newly created new table that is chained to the previous value of top just before block entry. Variable top is an object of class Env; the code for the constructor Env appears in Fig. 2.37.

A declaration, decls ->• t y p e id results in a new entry for the declared identifier. We assume that tokens t y p e and id each have an associated attribute, which is the type and lexeme, respectively, of the declared identifier. We shall not go into all the fields of a symbol object s, but we assume that there is a field type that gives the type of the symbol. We create a new symbol object s and assign its type properly by s.type — type.lexeme. The complete entry is put into the top symbol table by top.put(\d.lexeme, s).

The semantic action in the production factor -> id uses the symbol table to get the entry for the identifier. The get operation searches for the first entry in the chain of tables, starting with top. The retrieved entry contains any information needed about the identifier, such as the type of the identifier.