Parsing is the process of determining how a string of terminals can be generated by a grammar. In discussing this problem, it is helpful to think of a parse tree being constructed, even though a compiler may not construct one, in practice. However, a parser must be capable of constructing the tree in principle, or else the translation cannot be guaranteed correct.

For any context-free grammar there is a parser that takes at most 0 ( n 3 ) time to parse a string of n terminals. But cubic time is generally too expen-sive. Fortunately, for real programming languages, we can generally design a grammar that can be parsed quickly. Linear-time algorithms suffice to parse essentially all languages that arise in practice. Programming-language parsers almost always make a single left-to-right scan over the input, looking ahead one terminal at a time, and constructing pieces of the parse tree as they go.

Most parsing methods fall into one of two classes, called the top-down and bottom-up methods. These terms refer to the order in which nodes in the parse tree are constructed. In top-down parsers, construction starts at the root and proceeds towards the leaves, while in bottom-up parsers, construction starts at the leaves and proceeds towards the root. The popularity of top-down parsers is due to the fact that efficient parsers can be constructed more easily by hand using top-down methods. Bottom-up parsing, however, can handle a larger class of grammars and translation schemes, so software tools for generating parsers directly from grammars often use bottom-up methods.

We introduce top-down parsing by considering a grammar that is well-suited for this class of methods. Later in this section, we consider the construction of top-down parsers in general. The grammar in Fig. 2.16 generates a subset of the statements of C or Java. We use the boldface terminals if and for for the keywords "if" and "for", respectively, to emphasize that these character sequences are treated as units, i.e., as single terminal symbols. Further, the terminal expr represents expressions; a more complete grammar would use a nonterminal expr and have productions for nonterminal expr. Similarly, other is a terminal representing other statement constructs.

The top-down construction of a parse tree like the one in Fig. 2.17, is done by starting with the root, labeled with the starting nonterminal stmt, and re-peatedly performing the following two steps.

1. At node JV, labeled with nonterminal A, select one of the productions for A and construct children at N for the symbols in the production body.

Find the next node at which a subtree is to be constructed, typically the leftmost unexpanded nonterminal of the tree.

For some grammars, the above steps can be implemented during a single left-to-right scan of the input string. The current terminal being scanned in the 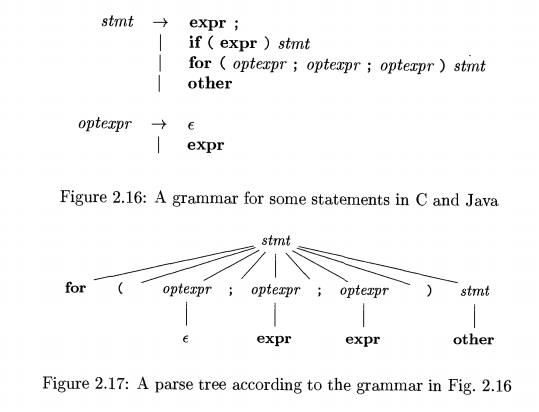 Initially, the terminal for is the lookahead symbol, and the known part of the parse tree consists of the root, labeled with the starting nonterminal stmt in Fig. 2.18(a). The objective is to construct the remainder of the parse tree in such a way that the string generated by the parse tree matches the input string.

For a match to occur, the nonterminal stmt in Fig. 2.18(a) must derive a string that starts with the lookahead symbol for. In the grammar of Fig. 2.16, there is just one production for stmt that can derive such a string, so we select it, and construct the children of the root labeled with the symbols in the production body. This expansion of the parse tree is shown in Fig. 2.18(b).

Each of the three snapshots in Fig. 2.18 has arrows marking the lookahead symbol in the input and the node in the parse tree that is being considered. Once children are constructed at a node, we next consider the leftmost child. In Fig. 2.18(b), children have just been constructed at the root, and the leftmost child labeled with for is being considered. 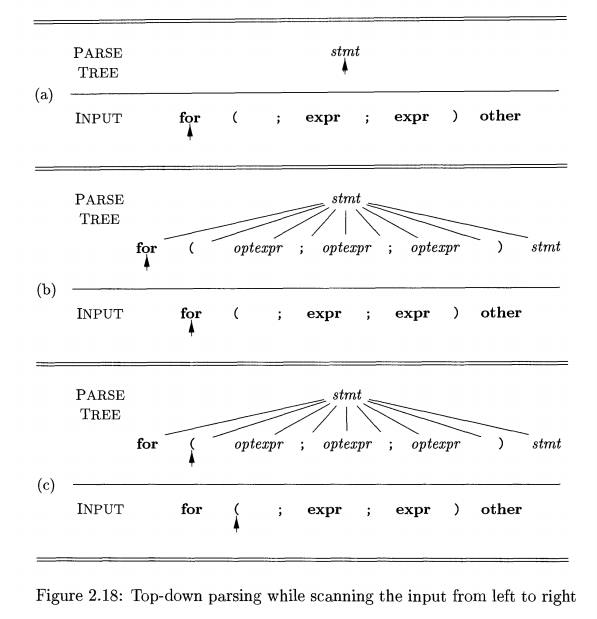 In general, the selection of a production for a nonterminal may involve trial-and-error; that is, we may have to try a production and backtrack to try another production if the first is found to be unsuitable. A production is unsuitable if, after using the production, we cannot complete the tree to match the input string. Backtracking is not needed, however, in an important special case called predictive parsing, which we discuss next.

Recursive-descent parsing is a top-down method of syntax analysis in which a set of recursive procedures is used to process the input. One procedure is associated with each nonterminal of a grammar. Here, we consider a simple form of recursive-descent parsing, called predictive parsing, in which the lookahead symbol unambiguously determines the flow of control through the procedure body for each nonterminal. The sequence of procedure calls during the analysis of an input  string implicitly defines a parse tree for the input, and can be used to build an          explicit parse tree, if desired.

The predictive parser in Fig. 2 . 1 9 consists of procedures for the nontermi-nals stmt and optexpr of the grammar in Fig. 2 . 1 6 and an additional procedure match, used to simplify the code for stmt and optexpr. Procedure match(t) com-pares its argument t with the lookahead symbol and advances to the next input terminal if they match. Thus match changes the value of variable lookahead, a global variable that holds the currently scanned input terminal.

Parsing begins with a call of the procedure for the starting nonterminal stmt. With the same input as in Fig. 2 . 1 8 , lookahead is initially the first terminal for. Procedure stmt executes code corresponding to the production

In the code for the production body — that is, the for case of procedure stmt — each terminal is matched with the lookahead symbol, and each nonterminal leads to a call of its procedure, in the following sequence of calls:

Predictive parsing relies on information about the first symbols that can be generated by a production body. More precisely, let a be a string of grammar symbols (terrninals and/or nonterminals). We define F I R S T ( a ) to be the set of terminals that appear as the first symbols of one or more strings of terminals generated from a. If a is e or can generate e, then e is also in F I R S T (a).

The details of how one computes FIRST ( o ;) are in Section 4 . 4 . 2 . Here, we shall just use ad hoc reasoning to deduce the symbols in F I R S T (a); typically, a will either begin with a terminal, which is therefore the only symbol in F I R S T ( Q ; ) , or a will begin with a nonterminal whose production bodies begin with termi-nals, in which case these terminals are the only members of F I R S T ( a ) .

For example, with respect to the grammar of Fig. 2 . 1 6 , the following are correct calculations of FIRST. 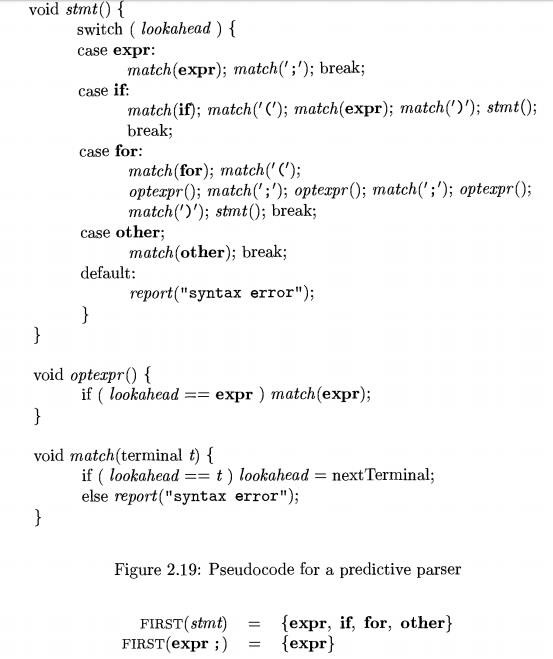 Our predictive parser uses an e-production as a default when no other produc-tion can be used. With the input of Fig. 2.18, after the terminals for and ( are matched, the lookahead symbol is ;. At this point procedure optexpr is called, and the code

in its body is executed. Nonterminal optexpr has two productions, with bodies expr and e. The lookahead symbol ";" does not match the terminal expr, so the production with body expr cannot apply. In fact, the procedure returns without changing the lookahead symbol or doing anything else. Doing nothing corresponds to applying an e-production.

More generally, consider a variant of the productions in Fig. 2.16 where optexpr generates an expression nonterminal instead of the terminal expr:

Thus,  optexpr either generates an expression     using nonterminal  expr or it generates e. While parsing optexpr, if the lookahead symbol is not in FIRST (espr), then the e-production is used.

For more on when to use e-productions, see the discussion of LL(1) grammars in Section 4.4.3.

We can generalize the technique introduced informally in Section 2.4.2, to apply to any grammar that has disjoint FIRST sets for the production bodies belonging to any nonterminal. We shall also see that when we have a translation scheme — that is, a grammar with embedded actions — it is possible to execute those actions as part of the procedures designed for the parser.

Construct a predictive parser, ignoring the actions in productions.

We shall construct such a translator in Section 2.5.

It is possible for a recursive-descent parser to loop forever. A problem arises with "left-recursive" productions like

where the leftmost symbol of the body is the same as the nonterminal at the head of the production. Suppose the procedure for expr decides to apply this production. The body begins with expr so the procedure for expr is called recursively. Since the lookahead symbol changes only when a terminal in the body is matched, no change to the input took place between recursive calls of expr. As a result, the second call to expr does exactly what the first call did, which means a third call to expr, and so on, forever.

A left-recursive production can be eliminated by rewriting the offending production. Consider a nonterminal A with two productions

where a and /3 are sequences of terminals and nonterminals that do not start with A. For example, in

The nonterminal A and its production are said to be left recursive, because the production A -> Aa has A itself as the leftmost symbol on the right side.4 Repeated application of this production builds up a sequence of a's to the right of A, as in Fig. 2.20(a). When A is finally replaced by /3, we have a /3 followed by a sequence of zero or more a's .

The same effect can be achieved, as in Fig. 2.20(b), by rewriting the productions for A in the following manner, using a new nonterminal         R: 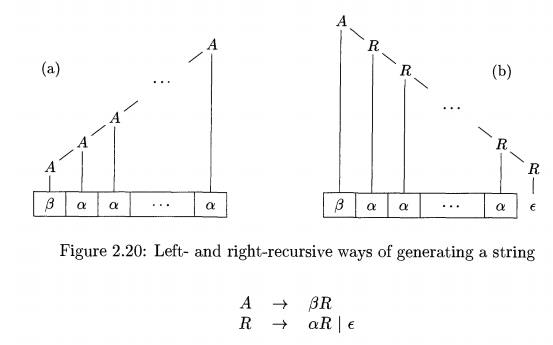 Nonterminal R and its production R -» aR are   recursive because this pro duction for R has R itself as the last symbol on the right side. Right-recursive productions lead to trees that grow down towards the right, as in Fig. 2.20(b). Trees growing down to the right make it harder to translate expressions con-taining left-associative operators, such as minus. In Section 2.5.2, however, we shall see that the proper translation of expressions into postfix notation can still be attained by a careful design of the translation scheme.