1 Removal of White Space and Comments 2 Reading Ahead 3 Constants 4 Recognizing Keywords and Identifiers 5 A Lexical Analyzer 6 Exercises for Section 2.6

1 Removal of White Space and Comments

A lexical analyzer reads characters from the input and groups them into "token objects."   Along with a        terminal symbol that  is  used  for parsing decisions, a token object carries additional information in the form of attribute values.

So far, there has   been  no      need to        distinguish between the terms  "token"  and "terminal," since the parser ignores the attribute values that are carried by a token. In this section, a token is a terminal along with additional information.

A sequence of input characters that comprises a single token is called a lexeme. Thus, we can say that the lexical analyzer insulates a parser from the lexeme representation of tokens.

The lexical analyzer in this section allows numbers, identifiers, and "white space" (blanks, tabs, and newlines) to appear within expressions. It can be used to extend the expression translator of the previous section. Since the expression grammar of Fig. 2.21 must be extended to allow numbers and identifiers, we shall take this opportunity to allow multiplication and division as well. The extended translation scheme appears in Fig. 2.28. 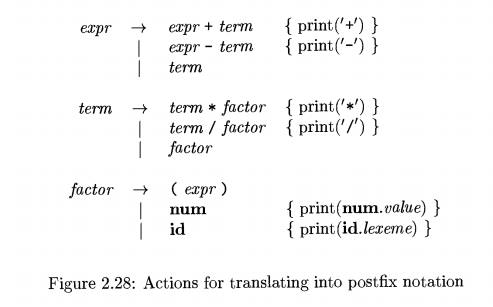 In Fig. 2.28, the terminal n u m is     assumed to have an attribute imm.value, which gives the integer value corresponding to this occurrence of num . Termi-nal id has a string-valued attribute written as id.lexeme; we assume this string is the actual lexeme comprising this instance of the token id.

The pseudocode fragments used to illustrate the workings of a lexical ana-lyzer will be assembled into Java code at the end of this section. The approach in this section is suitable for hand-written lexical analyzers. Section 3.5 de-scribes a tool called Lex that generates a lexical analyzer from a specification. Symbol tables or data structures for holding information about identifiers are considered in Section 2.7.

1. Removal of White Space and Comments

The expression translator in Section 2.5 sees every character in the input, so extraneous characters, such as blanks, will cause it to fail. Most languages allow arbitrary amounts of white space to appear between tokens. Comments are likewise ignored during parsing, so they may also be treated as white space.

If white space is eliminated by the lexical analyzer, the parser will never have to consider it. The alternative of modifying the grammar to incorporate white space into the syntax is not nearly as easy to implement.

The pseudocode in Fig. 2.29 skips white space by reading input characters as long as it sees a blank, a tab, or a newline. Variable peek holds the next input character. Line numbers and context are useful within error messages to help pinpoint errors; the code uses variable line to count newline characters in the input.

A general approach to reading ahead on the input, is to maintain an input buffer from which the lexical analyzer can read and push back characters. Input buffers can be justified on efficiency grounds alone, since fetching a block of characters is usually more efficient than fetching one character at a time. A pointer keeps track of the portion of the input that has been analyzed; pushing back a character is implemented by moving back the pointer. Techniques for input buffering are discussed in Section 3.2.

Anytime a single digit appears in a grammar for expressions, it seems reasonable to allow an arbitrary integer constant in its place. Integer constants can be allowed either by creating a terminal symbol, say num, for such constants or by incorporating the syntax of integer constants into the grammar. The job of collecting characters into integers and computing their collective numerical value is generally given to a lexical analyzer, so numbers can be treated as single units during parsing and translation.

W h en a sequence of digits appears in the input stream, the lexical analyzer passes to the parser a token consisting of the terminal n u m along with an integer-valued attribute computed from the digits. If we write tokens as tuples enclosed between ( ), the input 31 + 28 + 59 is transformed into the sequence

Here, the terminal symbol + has no attributes, so its tuple is simply (+). The pseudocode in Fig. 2.30 reads the digits in an integer and accumulates the value of the integer using variable v.

Character strings are also used as identifiers to name variables, arrays, func-tions, and the like. Grammars routinely treat identifiers as terminals to sim-plify the parser, which can then expect the same terminal, say id, each time any identifier appears in the input. For example, on input

the parser works with the terminal stream id = id + id. The token for id has an attribute that holds the lexeme. Writing tokens as tuples, we see that the tuples for the input stream (2.6) are

Keywords generally satisfy the rules for forming identifiers, so a mechanism is needed for deciding when a lexeme forms a keyword and when it forms an identifier. The problem is easier to resolve if keywords are reserved; i.e., if they cannot be used as identifiers. Then, a character string forms an identifier only if it is not a keyword.

The lexical analyzer in this section solves two problems by using a table to hold character strings:

• Reserved Words. Reserved words can be implemented by initializing the string table with the reserved strings and their tokens. When the lexical analyzer reads a string or lexeme that could form an identifier, it first checks whether the lexeme is in the string table. If so, it returns the token from the table; otherwise, it returns a token with terminal id.

In Java, a string table can be implemented as a hash table using a class called Hashtable. The declaration

sets up words as a default hash table that maps keys to values. We shall use it to map lexemes to tokens. The pseudocode in Fig. 2.31 uses the operation get to look up reserved words.

collect letters or    digits into a buffer 6;

s = string formed from the characters in 6;

This pseudocode collects from the input a string s consisting of letters and digits beginning with a letter. We assume that s is made as long as possible; i.e., the lexical analyzer will continue reading from the input as long as it encounters letters and digits. When something other than a letter or digit, e.g., white space, is encountered, the lexeme is copied into a buffer 6. If the table has an entry for s, then the token retrieved by words.get is returned. Here, s could be either a keyword, with which the words table was initially seeded, or it could be an identifier that was previously entered into the table. Otherwise, token id and attribute s are installed in the table and returned.

The pseudocode fragments so far in this section fit together to form a function scan that returns token objects, as follows:

handle reserved words and identifiers, as in Section 2.6.4;

/* if we get here, treat read-ahead character peek as a token */

The rest of this section implements function scan as part of a Java package for lexical analysis. The package, called l e x e r has classes for tokens and a class Lexer containing function  scan.

Each class is in a file by itself.  The file for class Token is as follows:

Line 1 identifies the package lexer.  Field   t a g is declared on line 3 to be final so it cannot be changed once it is set. The constructor Token on line 4 is used to create token objects, as in new   Token ('+')

which creates a new object of class Token and sets its field tag to an integer representation of ' + '. (For brevity, we omit the customary method t o String , which would return a string suitable for printing.)

Where the pseudocode had terminals like n u m and id, the Java code uses integer constants. Class Tag implements such constants:

In addition to the integer-valued fields NUM and ID, this class defines two addi-tional fields, TRUE and FALSE, for future use; they will be used to illustrate the treatment of reserved keywords.7

The fields in class Tag are public, so they can be used outside the package.

They are     static , so there is just one instance or copy of these  fields.  The fields are final , so they can be set just once.  In effect,   these fields represent constants. A similar effect is achieved in C by using define-statements to allow names such as NUM to be used as symbolic constants, e.g.:

The Java code refers to Tag. NUM and Tag. ID in places where the pseudocode referred to terminals n u m and id. The only requirement is that Tag.NUM and Tag. ID must be initialized with distinct values that differ from each other and from the constants representing single-character tokens, such as ' +' or ' *' . 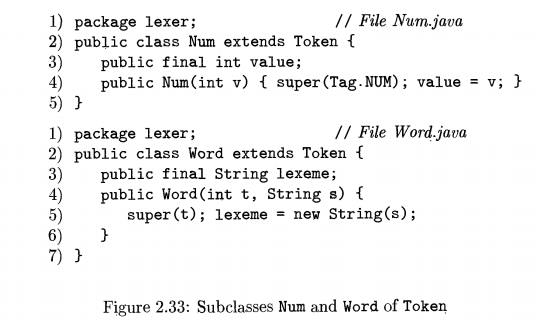 Class Word is used for both reserved words and identifiers, so the constructor Word on line 4 expects two parameters: a lexeme and a corresponding integer value for tag. An object for the reserved word true can be created by executing

which creates a new object with field tag set to Tag.TRUE and field lexeme set to the string "true".

Class Lexer for lexical analysis appears in Figs. 2.34 and 2.35. The integer variable line on line 4 counts input lines, and character variable peek on line 5 holds the next input character.

Reserved words are handled on lines 6 through 11. The table words is declared on line 6. The helper function reserve on line 7 puts a string-word pair in the table. Lines 9 and 10 in the constructor Lexer initialize the table. They use the constructor Word to create word objects, which are passed to the helper function reserve. The table is therefore initialized with reserved words "true" and "false" before the first call of scan.

The code for scan in Fig. 2.34-2.35 implements the pseudocode fragments in this section. The for-statement on lines 13 through 17 skips blank, tab, and newline characters. Control leaves the for-statement with peek holding a non-white-space character.

The code for reading a sequence of digits is on lines 18 through 25. The function isDigit is from the built-in Java class Character. It is used on line 18 to check whether peek is a digit. If so, the code on lines 19 through 24 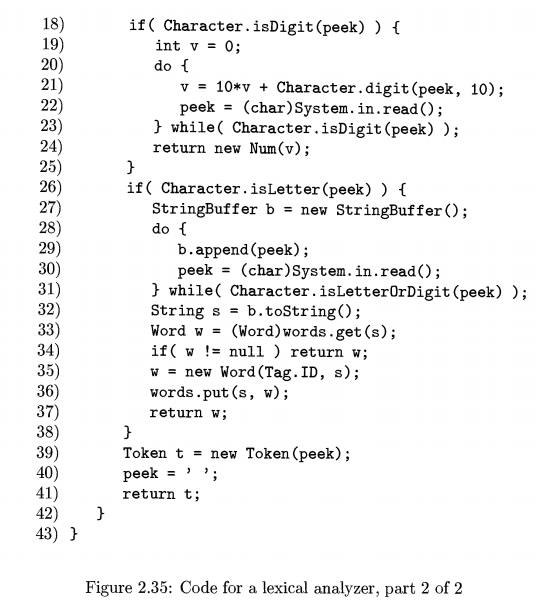 accumulates the integer value of the sequence of digits in the input and returns a new Num object.

Lines 26 through 38 analyze reserved words and identifiers. Keywords true and false have already been reserved on lines 9 and 10. Therefore, line 35 is reached if string s is not reserved, so it must be the lexeme for an identifier. Line 35 therefore returns a new word object with lexeme set to s and tag set to Tag. ID. Finally, lines 39 through 41 return the current character as a token and set peek to a blank that will be stripped the next time scan is called.

A comment begins with // and includes all characters until the end of that line.

A comment begins with /* and includes all characters through the next occurrence of the character sequence */ .