OFFICE WORK in surveying consists of converting the field measurements into a usable format.

OFFICE WORK in surveying consists of converting the field measurements into a usable format. The conversion of computed, often mathematical, values may be required immediately to continue the work, or it may be delayed until a series of field measurements is completed. Although these operations are performed in the field during lapses between measurements, they can also be considered office work. Such operations are normally done to save time. Special equipment, such as calculators, conversion tables, and some drafting equipment, are used in most office work.

In any field survey operation, measurements are derived by the application of some form of mathematical computation. It may be simple addition of several full lengths and a partial tape length to record a total linear distance between two points. It maybe the addition or subtraction of differences in elevation to determine the height of instrument or the elevation during leveling. Then again, it maybe checking of angles to ensure that the allowable error is not exceeded.

Office computing converts these distances, elevations, and angles into a more usable form. The finished measurements may end up as a computed volume of dirt to be moved for a highway cut or fill, an area of land needed for a SEABEE construction project, or a new position of a point from which other measurements can be made.

In general, office computing reduces the field notes to either a tabular or graphic form for a permanent record or for continuation of fieldwork.

SIGNIFICANT FIGURES.- The term known to be exact.

The number of significant figures in a number ending in one or more zeros is unknown unless more information is given. The zeros may have been added to show the location of the decimal point; for example, 73200 may have three, four, or five significant figures, depending on whether the true value is accurate to 100, 10, or 1 unit(s). If the number is written 73200.0, it indicates accuracy is carried to the tenth of a unit and is considered to have six significant figures.

When decimals are used, the number of significant figures is not always the number of digits. A zero may or may not be significant, depending on its position with respect to the decimal and the digits. As mentioned above, zeros may have been added to show the position of the decimal point. Study the following examples:

In long computations, the values are carried out to one more digit than required in the result. The number is rounded off to the required numbers of digits as a final step.

ROUNDING OFF NUMBERS.- Rounding off is the process of dropping one or more digits and replacing them with zeros, if necessary, to indicate the number of significant figures. Numbers used in surveying are rounded off according to the following rules:

4. Dropped digits to the left of the decimal point are replaced by zeros.

Dropped digits to the right of the decimal points are never replaced. 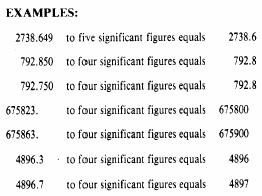 CHECKING COMPUTATIONS.- Most mathematical problems can be solved by more than one method. To check a set of computations, you should use a method that differs from the original method, if possible. An inverse solution, starting with the computed value and solving for the field data, is one possibility. The planimeter and the protractor are also used for approximate checking. A graphical solution can be used, when feasible, especially if it takes less time than a mathematical or logarithmic solution. Each step that cannot be checked by any other method must be recomputed; and, if possible, another EA should recompute the problem. When an error or mistake is found, the computation should be rechecked before the correction is accepted

The general concept of drafting and the use of drafting instruments were discussed in chapters 2 through 5. By this time, you should be familiar with the use of various drafting instruments and with the elements of mechanical drawing. Draft-ing used in surveying, except for some freehand sketches, is generally performed by mechanical means; for example, the drawing of lines and surveying symbols is generally done with the aid of a straightedge, spline, template, and so on.

The drawings you make that are directly related to surveying will consist of maps, profiles, cross sections, mass diagrams, and, to some extent, other graphical calculations. Their usefulness depends upon how accurately you plot the points and lines representing the field measurements. It is important that you adhere to the requirements of standard drawing practices. Correctness, neatness, legibility, and well proportioned drawing arrangements are signs of professionalism.

In drawing a PROPERTY map, for example, the following general information must be included:

1.        The length of each line, either indicated on the line itself or in a tabulated form, with the distances keyed to the line designation.

2. The bearing of each line or the angles between lines.

3. The location of the mapped area as referenced to an established coordinate system.

4.        The location and kind of each established monument indicating distances from referencemarks.

5. The name of each road, stream, landmark, and so on.

6.        The names of all property owners, including those whose lots are adjacent to the mapped area.

7. The direction of the true or magnetic meridian, or both.

9. A legend to the symbols shown on the map, if those shown are not standard signs.

Besides the above information, there are some other items that may be required if the map is to become a public record. When this is the case, consult the local office of the Bureau of Land Management or the local surveyors'societyfor the correct general information requirements to be included in the map to be drawn.

In drawing maps that will be used as a basis for studies, such as those to be used in roads, structures, or waterfront construction, you are required to include the following general information:

1.        Information that will graphically represent the features in the plan, such as streams, lakes, boundaries, roads, fences, and condition and culture of the land.

2. The relief or contour of the land.

4. The direction of the meridian.

5. The legend to symbols used, if they are not conventional signs.

6.        A standard title block with a neat and appropriate title that states the kind or purpose of the map. Again, the surveyor'snameandthat of the draftsman, as well as the date of survey, are to be included in the title block.

Maps developed as a basis for studies are so varied in purpose that the above information may be adequate for some but inadequate for others. The Engineering Aid, when in doubt, should consult the senior EA, the engineering officer, or the operations officer as to the information desired in the proposed map. The senior EA or the chief of the field survey party is required to know all these requirements before actual fieldwork is started.

A map with too much information is as bad as a map with too little information on it. It is not surprising to find a map that is so crowded with information and other details that it is hard to comprehend. If this happens, draw the map to a larger scale or reduce the information or details on it. Then, provide separate notes or descriptions for other information that will not fit well and thus will cause the appearance of overcrowding. Studying the features and quality of existing maps developed by NAVFACENGCOM and civilian architects and engineers (A & E) agencies will aid you a great deal in your own map drawing.