The Constitution of India provides for a three - tier judicial system: (1). The Supreme Court of India (2). The High Courts in the constituent States and (3). The District and Sessions Courts in the judicial districts in every state.

The Constitution of India provides for a three - tier judicial system:

(1). The Supreme Court of India

(2). The High Courts in the constituent States and

(3). The District and Sessions Courts in the judicial districts in every state. 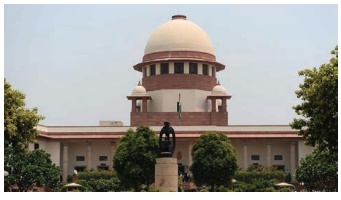 The Constitution also provides for an independent judiciary i.e. independence of the Executive and the legislature. In a democratic federal polity like India. The Supreme Court assumes a much bigger note as the guardian of the Constitution, as an arbitrator in disputes between States and the Union Government and in disputes among the States, and as the highest appellate Courts in all civil and criminal cases. It is endowed with the onerous responsibility of safeguarding and enforcing the fundamental rights and freedoms of all citizens of India. However, unlike the federal system in the USA, the Constitution of India of India does not provide for two sets of judiciary (one as federal, another for States). India has only a unitary judiciary system, with the Supreme Court as the apex Court, with authority over all other Courts in India.

The Sources of Law : The Constitution is the fountain source of law in India. Statutes enacted by legislatures of the union, State or Union Territories become another source of law as long as these are in conformity the basics of the Constitution. Besides the subordinate legislations in the form of rules, regulations as well as by – laws of any administrative body, unless and until negated by the judiciary constitute the third source of law.

“The Indian Federation, though a dual polity, has no dual judiciary at all. The High Courts and The Supreme Court Constitute one single integrated judiciary having jurisdiction and providing remedies in all cases under the Constitutional law, The Civil law or the criminal law. This is done to eliminate all diversities in a remedial procedure”

The Supreme Court is the highest or Apex appellate Court in India, where appeals against judgments of High Courts can be made; ( in both civil and criminal cases)

The Supreme Court functions as the guardian of the Constitution; It is the final authority to interpret the Constitutional may justify the topic and another group may disagree.

law, and has the authority to declare any law or executive action, or judgments of lower Courts ‘null and void’ if the Supreme Court find them against the letter and spirit of the Constitution. It is also the apex agency to safeguard the fundamental rights listed out in the Constitution.

v  With more than 8 lakh cases pending in district and subordinate courts, Uttar Pradesh tops the list of States with the highest number of decade-old-court cases.

v  As per the National Judicial Data Grid, there are 2.91 crore cases pending in district and subordinate courts, out of which 21.90 lakh cases are pending for more than 10 years.

v  Uttar Pradesh is followed by Bihar, with more than 3 lakh pending cases, and Maharashtra with over 2 lakh cases. Sikkim and Andaman and Nicobar are at the bottom with two and no pending cases, respectively.

v  Teacher can organise a Critical Debate on “Justice delayed is justice denied”. Learners can be divided into two groups. One group

Organization of the Supreme Court

As to the appointment of the Supreme Court judges, The Chief Jostle of India should consult a “Collegium” of four senior most judges of the Supreme Court. The Collegium makes the decision in consensus. Every Judge of the Supreme Court is appointed by the President after consultation with the cabinet and the Judges of the Supreme Court and such Judges shall hold office until they attain the age of sixty five years. If any of the judges wants to lay down office, he can do so through an hand written signed resignation letter to the President; the Parliament can remove a Judge through an impeachment. TO be considered for the office of Judge, one must be a citizen of India and his qualification is per the Parliament’s decision, and the should have been judge of High Court at least for a period of 5 years; or an advocates of a High Court or of two or more such courts in succession for at least 10 years or the person must be, in the opinion of the President, a distinguished jurist.

A Judge of the Supreme Court can be tried by an order of the President, after an address by each House of the Parliament supported by a majority of the total membership of that house and by a majority of not less than two thirds of the members of the house present and voting in the same session.

Appointments are generally made on the basis of Seniority

In 2007, Justice K.G. Balakrishnan became the first Chief Justice of the Supreme Court from the scheduled caste community.

The Supreme Court of India under the present Constitution commenced functioning on January 28, 1950. It was placed then in the Chamber of Princes in the Parliament. It moved to the present building in 1958.

The High Courts too have original and appellate jurisdictions, in cases arising within the territories of the State. Each High Court has powers of Super, intendant over all courts within its jurisdiction. Though the High Courts are the party of single and integrated judicial system, yet they are completely independent judicial institutions. The Supreme Court has no direct administrative control over them, nor they are in any way controlled try either the legislature or executive of the State. But the Judger may be transferred from one High Court to another by the President his consultation with the Chief Justice of India.

The High Court too has the power to issue writ in cases involving ‘Fundamental Rights’.

Both the Supreme Court and High Court have the power to issue writs with a view to ensure quicker justice and early relief to persons whose rights are violated. There are five such writs.

1. Habeas Corpus: Literally means a demand to produce the person in body. It applies in cases where a person is alleged to have been illegally detained. This writ safeguards personal liberty of every individual.

2. Mandamus is a command to act law fully and to resist from penetrothing an unlawful act, It is meant to direct any authority to perform its legal duty. Mandamus may he issued against any authority, Officers, Government or even judicial bodies that tail or refuse to perform a public duty and discharge a legal obligation.

5. Quo – Warranto is a question asking ‘with what authority or warrant’. This is meant ascertain the legal position in regard to claim of a person to hold a public office.

Besides these writs, the High Court’s under Article 226 may issue other directions and orders in the interests of justice to the people.

Follow the newspaper for one month and collect news items related to civil cases in the District and Session court, High Court and Supreme Court of our country. Write the headlines of the news in the chart. Display the chart in the notice board or present your collections in the classroom.