India has been a Sub – Continent of different races, different cultures, different languages and a multitude of political and social systems.

India has been a Sub – Continent of different races, different cultures, different languages and a multitude of political and social systems. In ancient times, as well as in the medieval times, none of the Indian States was segregating judicial functions from the executive. During the Vedic period, the authority of the head of the family (Kulapa or Kulapato) was insulated from royal interferences; Similarly the clannish or tribal bodies like Grama, Gopa, Vishaya, Jana and Gana enjoyed autonomous powers. In the ancient Indian monarchical orders, the king was considered to be the highest judicial authority. As king’s will was the law, his word was the highest and absolute verdict in disputes.

However, most of the disputes were settled and disposed of at the local level through caste bodies or local administrative bodies. Extreme cases like treason were tried in the king’s court. There was no regular system of jurisprudence or judicial procedures. Most often the accused was to prove his innocence either through evidences and witnesses or through subjection to different kinds of ordeals such as ordeal by fire, ordeal by water and ordeal by poison.

Punishments (penal system) was severe and even barbaric if blood money was in vogue (less was to be replaced with material compensation)-Whipping, flogging, amputation of limbs, impalement, rigorous imprisonment, enslavement, banishment, confiscation of property, beheading, hanging and trampling by elephants were some of the punishments meted out to the culprits. In kingdoms which came under Brahmanical influence, smritis were invoked in trial as well as in awarding punishments.

There were a number of smritis such as Manusmrit, Narada Smriti, and Yagnavakya Smritis : of which Manu Smriti was held as a core Smriti, other smritis had certain variatious. The Smritis generally upheld the graded varna – Jati social order. There was no ‘equality before law’ concept. Brahmins were mostly insulated from regular procedures and regular punishments. On any account, Brahmins, even if they committed the most heinous crimes, were to be exempted from physical torture, amputation, impalement or capital punishment. On the other hand the depressed castes were subjected to severe ordeals and extreme punishments; changing of caste based occupations was treated (Varna Sangraha) as a serious crime.

Arthasastra suggests disproportionate punishments for restricting instances of crimes; penalties levied on culprits, and confiscation of properties as a major source of royal income. The smritis treated women as inferior humans and were prejudiced against them even in matters of inheritance. The Sudras, and Panchamas were ineligible for a fair trial and fair punishment. Trade disputes were mostly settled through guilds (SRENIS). Similarly each artisan group had its own guild to resolve disputes within. The Mahasabhas of the Pallava – Pandya-Chola empires insulated Brahmins from regular system of justice. The Mahasabha’s variyam (Dharma variam, Nyaya variam) settled issues within the mahasabhas. The local bodies like Ur, Urar, Nadu, Nattar and Nagarathar had their own judicial arrangements.

The Buddhist kingdoms (like that of Asoka) mostly disregarded smritis and enforced some sort of equal treatment to various social groups in matters of judicial disputes. Asoka removed cruel punishments and even instructed his official to be more humane and compassionate towards prisoners. The episode involving Kovalan’s execution in Silappadikaram reveals the defects in the system of judicial procedure. Though high moral stature of the adjudicating officials were insisted in literature, we very often found arbitrariness in judicial trial and in awarding exemptions or punishments. There was no rule of law but rule of the powerful authorities that we find in ancient India. 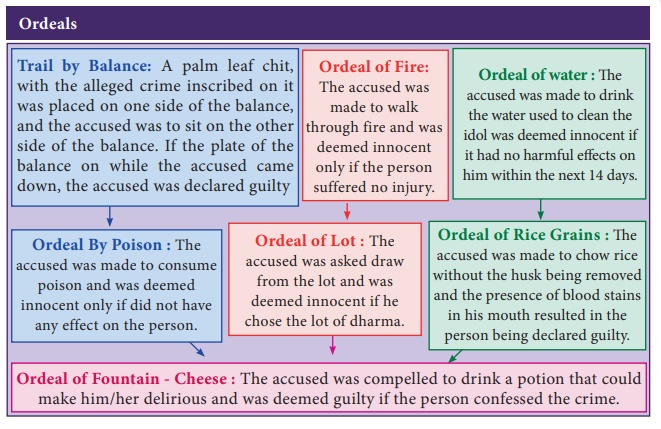 In medieval India, the Muslim rulers had faced a peculiar situation, where the majority of their subjects were Non-Muslims. While they applied Islamic law in cases where Muslims and Muslim interests were involved, they preferred a policy of non- intervention in the socio-religious affairs of the Non-Muslims, hence allowed the traditional system of justice in the rural areas. The Muslim rulers made a clear distinction between civil and criminal disputes and assigned deferent system for each of them. However, in cases of blasphemy, extreme punishment were awarded to the accused.