The East India Company was incorporated in 1601 by the Charter of Queen Elizabeth I.

The East India Company was incorporated in 1601 by the Charter of Queen Elizabeth I. The Charter granted recognition and authority to the Company to facilitate the regulation of trade. With regard to the administration in Madras, the Charter of 1661 led to the appointment of Governor and the Council in each of its settlement. Once the company became a territorial power, especially at Madras, it introduced an adhoc system of judicial administration, in which the existing native systems were accommodated, as the company preferred a policy of non-intervention in native affairs. The Governor and the Council were empowered to decide on both civil and criminal cases in accordance with the law of England. However, in disputes involving only the natives the native traditions were continued. The year 1665 was of great significance as it witnessed the first trial by jury in Madras in the case of Mrs. Ascentia Dawas during the Governorship of Fox Croft. The appointment of Streynsham Master as the Governor in 1678 resulted in the reorganization of the judicial system of Madras. The Court of the Governor and Council came to be known as the High Court of Judicature and English was declared as the court language. The Charter of 1683 led to the Company establishing Courts of Admiralty to try traders committing various crimes on high seas. The Charter of 1687 authorized the Company to create the Corporation of Madras and the Mayor’s Court was attached to it. It functioned as a court of record for the Madras town.

With regard to the administration of justice in Bombay, the Charter of 1668 authorized the Company to exercise judicial authority over Bombay. The proclamation of 1672 introduced English Law in Bombay and the Court of Judicature and the new central court was established. The application of English law was confined to cases involving Europeans and European interests. The court exercised jurisdiction over civil, criminal and testamentary cases. Further, Justices of Peace were appointed to administer criminal law. After examining the witnesses and making an initial enquiry, the cases were moved to the Court of Judicature. However, the invasion of Sidi Yakub, the Mughal Admiral led to the dissolution of courts in Bombay in 1690. After 12 years, in 1718, the Court of Judicature was revived. The court had jurisdiction over civil and criminal matters. Though the court met only once a week, it was highly regarded for its speedy trial and impartial decisions.

With regard to the Calcutta Presidency, the Governor and the Council were endowed with judicial powers. In the case of civil and criminal matters, the Company followed the already existing Mughal system of judicial administration. The Faujdari Court presided over by the English Collector decided on the criminal cases and the civil cases were referred to an arbitrator by the Collector. The Collector played a very important role in the judicial administration of Calcutta and the office dealt with civil, criminal and revenue cases.

Thus, the Charter of 1687 applied only to Madras while the Charter of 1726 constituted a Mayor’s Court in each of the three Presidencies. The Charter of 1753 further reformed certain judicial provisions of the Charter of 1726. It also set up five courts namely the Court of Requests, the Mayor’s Court, the Courts of the President and the Council and the King-in-Council. Another landmark in the evolution of Indian judiciary was the Warren Hasting’s Plan of 1772. It regulated the system of judicial administration. In 1780, he also reorganized the Provincial Adalats.

One of the major development in the field of judiciary during the colonial period was the codification of native laws. 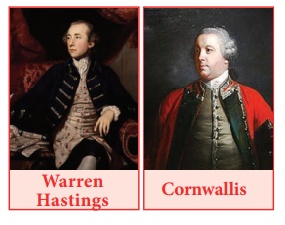 The first Governor General Warren Hastings caused the codification at Hindu Law, and Cornwallis code was another major contribution. Similarly, the Islamic law was also codified and adopted in courts.

The Regulating Act of 1773 empowered the Crown to establish the Supreme Court of Judicature in Calcutta and the Charter of 1774 expounded on the jurisdiction of the court. However, the Supreme Courts were not established at Bombay and Madras during the same period. The Supreme Courts were established in Madras and Bombay in the years 1801 and 1824 respectively. In 1793, Lord Cornwallis prepared “A Set of Regulations” popularly known as the Cornwallis Code and it dealt with both civil and criminal justice. He reorganized civil courts, abolished court fees and reformed criminal courts. Lord Minto after being appointed as the Governor-General of Bengal in 1807 increased the powers and jurisdiction of the various courts. Lord Hastings who became Governor General in 1813, introduced many reforms in the civil and criminal judicature of the country. Efforts were taken to curb red -tapism in the administration of justice. He was succeeded by Lord Bentinck who reorganized and consolidated the whole system of judicial administration in India. He abolished the Provincial Courts of Appeal and their functions were transferred to District Diwani Adalats. Between 1834 and 1861, the King’s Court and the Company’s Court formed the dual system of courts with separate jurisdictions. The Indian High Courts Act of 1861 empowered the Crown to establish the High Courts of Judicature at Calcutta, Madras and Bombay and this also led to the abolition of Supreme Courts. This was considered a landmark in the evolution of High Courts in India. Later, the Government of India Act of 1935 effected considerable changes in the nature and jurisdiction of the High Courts. Between independence and the enforcement of the Constitution, seven High Courts at Punjab, Assam, Orissa, Rajasthan, Travancore, Mysore and Jammu and Kashmir were established. The other High Courts were established later. The Constitution of India after being enforced recognized all the existing High Courts and empowered the Parliament to establish High Courts for all the States or combined High Courts for two or more States and Union Territories. The 42nd Constitutional Amendment Act, 1976 brought in drastic changes in the jurisdiction of the High Courts.

Thus, in the very beginning, there were only the three High Courts of Calcutta, Madras and Bombay. The Acts and regulations prior to independence brought in remarkable changes in their organization and jurisdiction, thereby ensuring their independence and impartiality. After the enforcement of the Constitution, their positions have been strengthened and apart from their original and appellate jurisdiction in civil and criminal cases they also act as the protector and interpreter of the Constitution.

With respect to the establishment of the Supreme Court of India, the Government of India Act, 1935 is a landmark legislation. The Act attempted to change the structure of the Indian government. There was a shift from a ‘unitary’ to a ‘federal’ type of government necessitating the need of a Federal Court. Thus, the Act made specific provision in this regard and the Federal Court was inaugurated in the year 1937. It consisted of a Chief Justice and six judges. In 1950, the Federal Court of India was succeeded by the Supreme Court of India. The Federal Court in its short span of 12 years left an indelible impact on the legal history of India. It was the first court with a national jurisdiction. It was from this Federal Court that its successor inherited the traditions of independence, integrity and impartiality. Also, between 1726 and 1833, the role of the Privy Council requires special mention. It contributed immensely to the judicial system of India, laying down the fundamental principles of Indian law that serve as a beacon to the Indian Courts even today.

The Indian Independence Act, 1947 resulted in the transfer of political power and this necessitated the establishment of a separate and independent judicial body. With this objective, the jurisdiction of the Federal Court was enlarged and the Abolition of the Privy Council Jurisdiction Act, 1949 was passed making the Federal Court of India the highest judicial body in the country. With the enforcement of the Constitution on 26 January 1950, Article 124 provided for the establishment of the Supreme Court of India. Thus, there has been a slow and steady evolution of the Indian judicial system and it has proven to be better and wiser with time.

Read more about the case of

Mrs. Ascentia Dawas, the first trial by jury in Madras.

In a blow to both the Chhattisgarh government and the Centre, the Supreme Court has declared as illegal and unconstitutional the deployment of tribal youths as Special Police Officers - either as ‘Koya Commandos’, SalwaJudum or any other force - in the fight against the Maoist insurgency and ordered their immediate disarming. The ruling - issued by Justice B. Sudershan Reddy and Justice S.S. Nijjar on the writ petition filed by social anthropologist Prof. Nandini Sundar and others - strongly indicted the State for violating Constitutional principles in arming youth who had passed only fifth standard and conferring on them the powers of police. 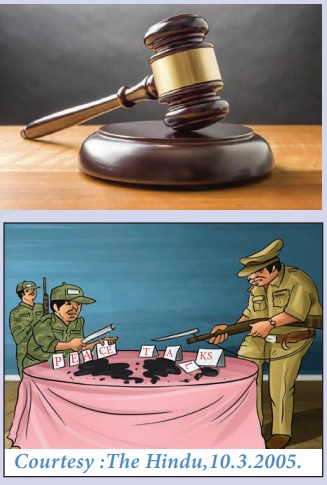 Writing the order, Justice Reddy directed the State of Chhattisgarh to immediately cease and desist from using SPOs in any manner or form in any activities, directly or indirectly, aimed at controlling, countering, mitigating or otherwise eliminating Maoist/Naxalite activities in the State of Chhattisgarh. The Bench made it clear that the State of Chhattisgarh should take all appropriate measures to prevent the operation of any group, including but not limited to SalwaJudum and Koya commandos, that in any manner or form seek to take law into private hands, act unconstitutionally or otherwise violate the human rights of any person. The Bench said “The primordial value is that it is the responsibility of every organ of the State to function within the four corners of constitutional responsibility. That is the ultimate rule of law.”

Teacher can organise a Group Discussion about the landmark judgement of the Supreme Court of India. Time allotted : 20 minutes

Read more about the Privy Council and have a discussion in class about its significance in the evolution of judicial administration in India.

In 1921, Sir Hari Singh Gour was the first person in the legal history of India to realize the necessity of establishing an All-India Court of Final Appeal in place of the Privy Council.