Sheathed bacteria are bacteria that grow as long filaments in the form of chain or trichome.

Flagella (singular flagellum) are threadlike, long, thin helical filaments measuring 0.01-0.02nm in diameter. These appendages extend outward from the plasma membrane and cell wall. Flagella are so thin that they cannot be observed directly with a bright field microscope, but must be stained with special techniques (example: Fontana’s silver staining technique) that increase their thickness. The detailed structure of a flagellum can only be seen in the electron microscope. 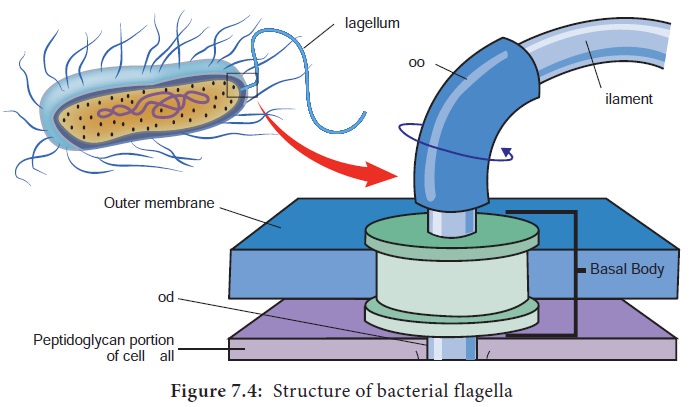 The bacterial flagellum is composed of three parts: a basal body (associated with the cytoplasmic membrane and cell wall), a short hook and a helical filament (which is usually several times as long as the cell). Filament is external to cell wall and is connected to the hook at cell surface; the hook and basal body are embedded in the cell envelope (Figure 7.4). Hook and filament are composed of protein subunits called as flagellin.

One can generalize that all spirilla, about half of the bacilli and a small number of cocci are flagellated. Some bacteria do not have flagella. Flagella vary both in number and arrangement on the cell surface. Flagella are arranged generally in two patterns.

1. In polar arrangement, the flagella are attached at one or both ends of the cell. Bacteria with polar flagellar arrangement are further classified into monotrichous, lophotrichous, and amphitrichous. 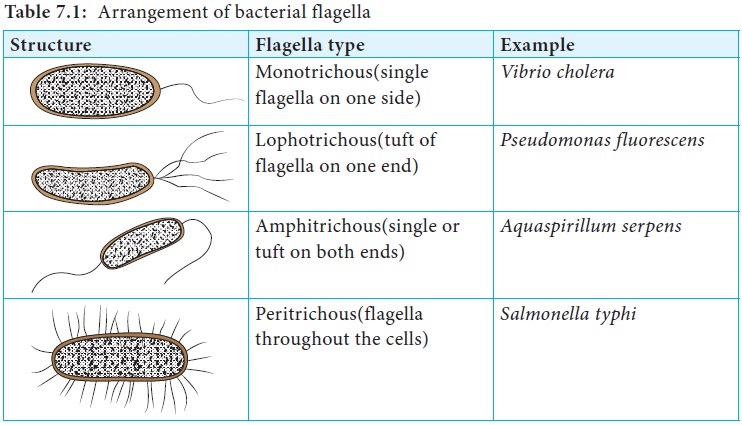 2. In lateral arrangement, flagella are arranged randomly all over the surface of the cell. Bacteria with lateral flagellar arrangement are called peritrichous. (Table 7.1)

Various types of mobility are observed based on the arrangement of the flagella. Serpentine motility is seen with Salmonella, darting motility with Vibrio and tumbling motility with Listeria monocytogenes. Some bacteria like Cytophaga exhibit a gliding motility, which is slow sinuous flexing motion. This occurs when the cells come in contact with solid surface.

The presence of motility is one piece of information used to identify a pathogen in the laboratory. One way to detect motility is to stab a tiny mass of cells into soft (semi solid) medium in a test tube. Growth spreading rapidly through the entire medium is indicative of motility. Alternatively, cells can be observed microscopically by a hanging drop method.

Pili (singular pilus) are straight, short and thin and more numerous than flagella around the cell. They can be observed only by electron microscopy. They are found only in certain species of Gram negative bacteria. Pili play no role in motility. Pili originate from the plasma membrane and are made up of a special protein called pilin (Figure 7.5).

Pili play a major role in human infection by allowing pathogenic bacteria to attach to epithelial cells lining the respiratory, intestinal or genitourinary tracts. This attachment prevents the bacteria being washed away by body fluids, thus helps in establishment of infection. One specialized type of pilus (sex pilus) helps in the transfer of genetic material between the bacterial cells. This process is called conjugation.

Fimbriae (singular: fimbria) is another term used for short pili that occur in great number around the cell. They enable bacteria to attach to surfaces and to each other, so that the bacteria form clumps or films called pellicles on the surface of liquid in which they are growing. Fimbriae are found in Gram positive as well as in Gram negative bacteria.

Table 7.2 compares the pili and fimbriae.

Many bacteria secrete high molecular weight polymers that adhere to the exterior of the cell wall to form a capsule or slime layer. Glycocalyx is often used to refer to any polysaccharide material outside the cell wall. Capsules and slime layer are considered to be glycocalyxes (Table 7.3).

Some bacterial cells are surrounded by a viscous substance forming a covering layer or envelope around the cell wall called capsule (Figure 7.6). Capsule is usually made up of polysaccharide. 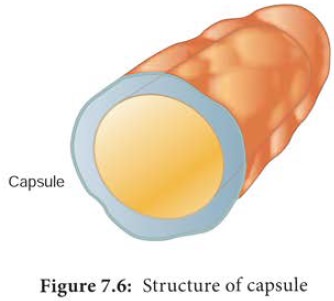 It may be homopolysaccharide (made up of a single kind of sugar) or heteropolysaccharide (made up of several kinds of sugars). These are synthesized from sugars within the cell, transported and polymerized outside the cell. The capsule of some bacteria is made of polypeptides. The capsule of Bacillus anthracis has polymer of D-glutamic acid. Capsules are highly impermeable. Capsules can be demonstrated using special staining technique utilizing Indian ink or with Nigrosin stain. The presence of capsule in fresh isolates gives a moist and shiny appearance to the bacterial colonies on an agar medium. Capsular material is antigenic and may be demonstrated by serological methods.

The role of the capsule varies depending on the bacterium.

Capsules protect the pathogenic bacteria from being engulfed and destroyed by white blood cells (phagocytes).

Some bacteria are covered with a surface layer that is loosely distributed around the cell and diffuses into the medium, this surface layer is referred to as slime layer. (Figure 7.7) The slime layer is a structure that is easily washed off. Slime layer protects bacteria from loss of water and nutrients. Slime has little affinity for basic dyes and is ivisible in Gram stained smears. 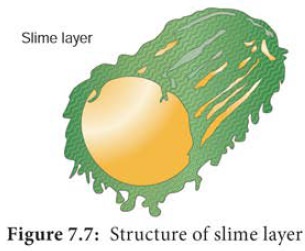 Sheathed bacteria are bacteria that grow as long filaments in the form of chain or trichome. These bacteria are enclosed by a hollow tube like structure known as sheath (Figure 7.8). 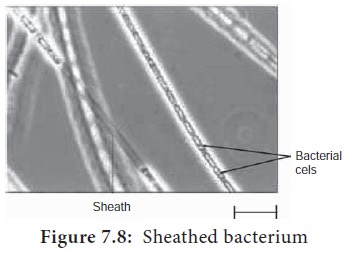 Within the shealth, the bacteria are capable of growth and division. Aquatic bacteria mostly form sheath. Examples of sheathed bacteria include Leptothrix discophora (also known as iron bacteria), Sphaerotilus and Clonothrix.

·        In a few bacteria, shealth is strengthened by the deposition of ferric and manganese hydroxides.

They are semi rigid extensions of cell wall and cell membrane. Some bacteria may contain more than one prosthecae (Figure 7.9). Aerobic bacteria in fresh water and marine environment possess prosthecae. Some of the prosthecate bacteria are Caulobacter, Stellar, Prosthecobacter and Hyphomicrobium. 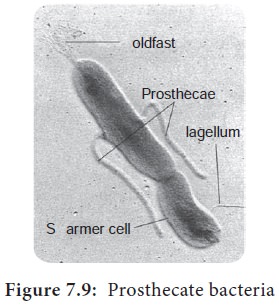 ·        Prosthecae increase surface area for absorption of nutrients from the dilute aquatic environment.

·        Some prosthecae develop bud at the tip and helps in asexual reproduction.

It is a nonliving ribbon like tubular structure. It is formed by excretory product of bacteria. Some of the stalked bacteria are Gallionella, Planctomyces (Figure 7.10). 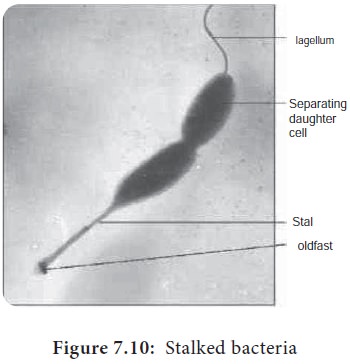 Stalk helps in attachment of cells to solid surface.