How do we hear? We are able to hear with the help of an extremely sensitive device called the ear.

How do we hear? We are able to hear with the help of an extremely sensitive device called the ear. It allows us to convert pressure variations in air with audible frequencies into electric signals that travel to the brain via the auditory nerve. The auditory aspect of human ear is discussed below.

The outer ear is called ‘pinna’. It collects the sound from the surroundings. The collected sound passes through the auditory canal. At the end of the ear is eardrum or tympanic membrane. When a compression of the medium reaches the eardrum the pressure on the outside of the membrane increases and forces the eardrum inward. Similarly the eardrum moves outward when a rarefaction reaches it. In this way the eardrum vibrates. The vibrations are amplified several times by three bones (the hammer, anvil and stirrup) in the middle ear. The middle ear transmits the amplified pressure variations received from the sound wave to the inner ear. In the inner ear, the pressure variations are turned into electrical signals by the cochlea. These electrical signals are sent to the brain via the auditory nerve and the brain interrupts them as sound. 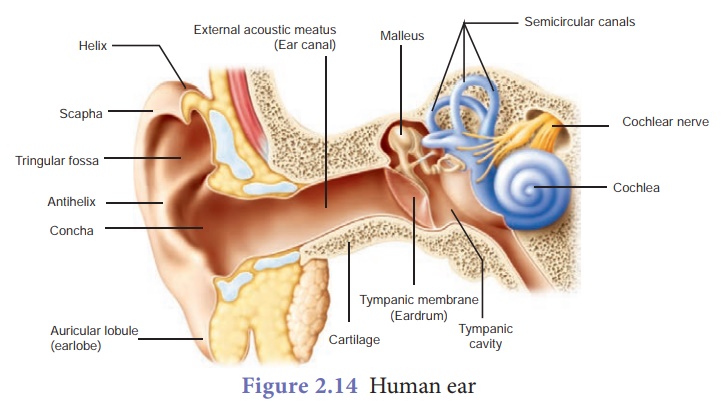