Structure of Viruses And Viral genetics 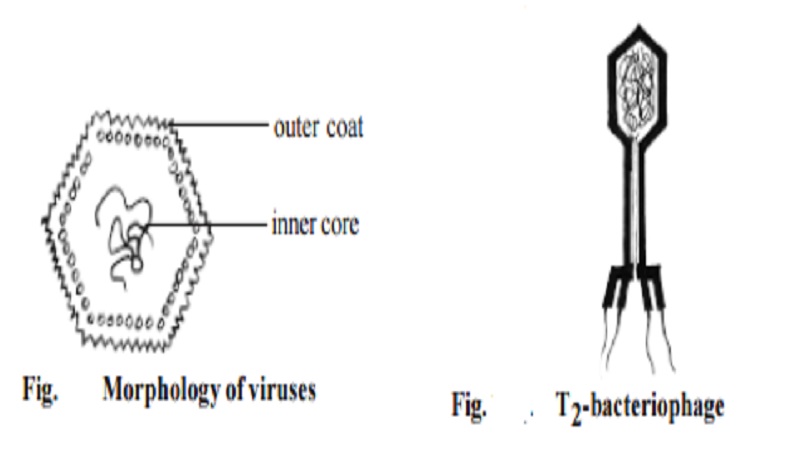 Animal and plant viruses are composed of a central core of nucleic acids surrounded by a protein covering called capsid. The capsid is made up of units called capsomeres.

Some animal viruses, in addition to the nucleocapsid structure contain an outer membrane like structure called the envelope. The envelope is made up of lipoproteins. The envelope conceals the symmetry of viruses. Virions with envelopes are sensitive to lipid solvents such as ether and chloroform. On the other hand, the naked virions are not affected by the lipid solvents.

Isohedral viruses such as adeno viruses, SV15, polio viruses and blue tongued viruses are spherical in shape and their surface is a lattice with identical triangular units.

Helical surface symmetry and structure are characteristic of tobacco mosaic virus(TMV) and animal viruses that cause diseases such as measles, mumps, influenza and rabies. In these, the nucleo capsid is a flexible structure packed within a fringed lipoprotein envelope. The fringes are made of glycoproteins. In TMV the nucleic acid core is covered by a capsid consisting of closely packed capsomeres arranged in a helix.

Complex or uncertain symmetry is seen in Pox viruses, T-bacterioph-ages,. These have different proteins and lipoproteins.

The viral genome contains all the genetic information either as DNA or RNA. but never both. The proportion of nucleic acid in a virion varies from 1 % as in influenza virus to about 50%, as in certain phages. Smaller viruses like paraviruses may have 3 to 4 genes while larger viruses like herpes and pox may have several hundred genes. Virions contain only a single copy of the nucleic acid. Hence they are called haploid viruses. The only exception is the retroviruses, which are said to be diploid as they contain two identical single-stranded RNA genomes. The virions are called the infectious particles.

The structure of nucleic acid in the virion may be either linear or circular. The DNA of most animal viruses in a linear molecule. In some plant viruses the genome is a circular RNA. But the RNA in animal viruses exists only as linear double stranded or single stranded molecule.