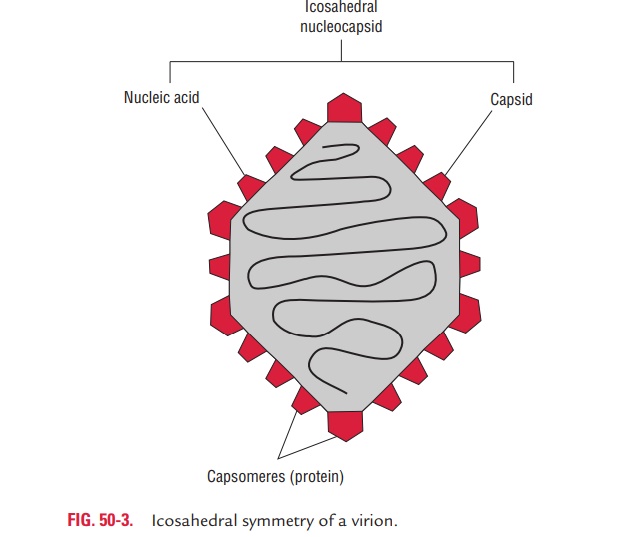 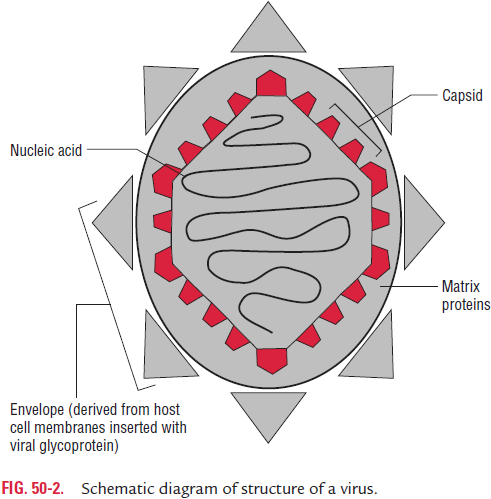 The nucleic acid of a virus is surrounded by a protein coat called the capsid. Each capsid is composed of a large number of protein subunits (polypeptides) calledcapsomeres, which form its morphological units. The polypeptide molecules compos-ing the capsomeres are of a single type in some viruses, while in other viruses several types may be present. The arrangement of capsomeres is characteristic of a particular type of virus.

The structure of the viral capsid is best demonstrated by X-ray crystallography or electron microscopy. On the basis of capsid structure, the viruses can be classified into different morpho-logical types as follows:

Helical viruses: The helical viruses appear rod-like and may berigid or flexible. The viral genome is found within hollow cylin-drical capsid that has a helical structure. The examples of heli-cal viruses include rabies virus, Ebola hemorrhagic virus, etc.

Complex viruses: Some viruses, such as viruses of bacteria(e.g., bacteriophages), have complicated structures and are called complex viruses.

The virion envelope usually consists of lipids, proteins, and glycoproteins. It has a membrane structure similar to cellular membrane of the host cell. The viral envelope does not con-tain any cellular proteins, even though viruses are released from the host cell by an extrusion process that coats the virus with a layer of host cell plasma membrane that becomes the viral envelope. In most cases, the envelope contains proteins that are determined and encoded by viral nucleic acid. The lipid compo-nent of the envelope is usually of host cell origin.

Depending on the virus, the envelopes of the viruses may or may not be covered by spikes. The spikes are glycoprotein-like projections on the outer surface of the envelope. Most spikes act as viral attachment protein (VAP).

·           The VAPs in some viruses perform different functions, such as neuraminidase activity of influenza virus, fusion glyco-protein of paramyxovirus and C3b receptor associated with herpes simplex virus.

The structural components of envelope remain biologically active only in aqueous solutions and are readily destroyed by drying or on treatment with acids, detergents, and solvents, such as ether, leading to inactivation of virus. They are rapidly killed in stomach due to sensitivity of enveloped components to gastric acidity. Therefore, most of the enveloped viruses are usually transmitted through body fluids, such as blood, respi-ratory droplets, tissue exudates, etc.

Three types of symmetry are observed depending on the arrangement of the capsid around the nucleic acid core (genome). These are (a) icosahedral (cubical), (b) helical, and (c) complex symmetry.

Icosahedral symmetry: Two types of capsomeres constitutethe icosahedral capsule. They are the pentagonal capsomeres or the vertices (pentons) and hexagonal capsomeres making up the facets (hexons) (Fig. 50-3). There are always 12 pentons, but the number of hexons varies with the virus group.

Each penton has fivefold symmetry (pentamer or pentagon) in the shape of an equilateral triangle. This pentamer symmetry is found in simple viruses, such as the picornaviruses and par-voviruses. In picornaviruses, each pentamer is made up of five protomers, each of which is composed of three subunits of four different proteins.

The hexamer symmetry is usually found in large capsid virions, such as herpesviruses and adenoviruses. Hexons are made up of certain structurally distinct capsomeres between the pentons at the vertices. The presence of hexon extends the icosahedral and is called an icosadeltahedral. The adenovirus nucleocapsid has 12 pentons and 240 hexons, whereas the herpesvirus nucleocapsid has 12 pentons and 150 hexons sur-rounded by an envelope. 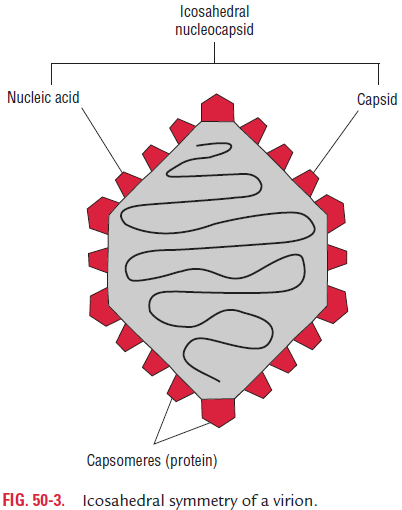 Helical symmetry: The nucleic acid and the capsomeres arewound together to form a spherical or spiral tube. The viruses with helical structure usually appear as rods and their capso-meres self-assemble on the RNA genome into rods extending to the length of the genome. These capsomeres cover and protect the RNA. The tubular nucleocapsid structure may be rigid as in tobacco mosaic virus, but may be pliable and may be coiled on itself in case of some other animal viruses. Helical nucleo-capsids are usually demonstrated within the envelope of most negative-stranded RNA viruses.

Most of the enveloped viruses are round or pleomorphic with exception of poxvirus and rhabdovirus. Rhabdovirus is a bullet-shaped virus, whereas poxvirus is brick shaped.