The replication of viruses in the host cell depends upon the synthesis mechanism of the host cell for manufacture of different viral components.

The multiplication of viruses, both DNA- and RNA-containing viruses, is divided into six phases as follows: (i) attachment, (ii) penetration, (iii) uncoating, (iv) biosynthesis, (v) maturation, and (vi) release (Fig. 50-5). 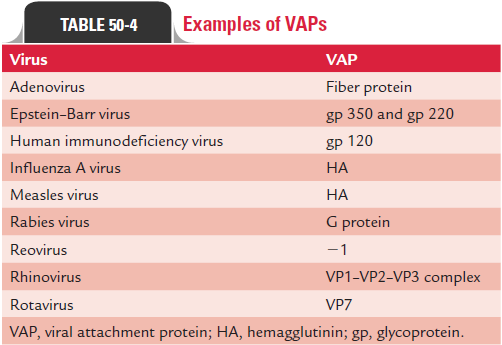 The attachment sites of the virus bind specifically to the complementary receptors on the surface of the host (Table 50-5). These receptor sites on the cell vary depending on the nature of the virus:

Susceptibility of the host to virus infection, therefore, depends upon the presence or absence of receptors on the cell surface. 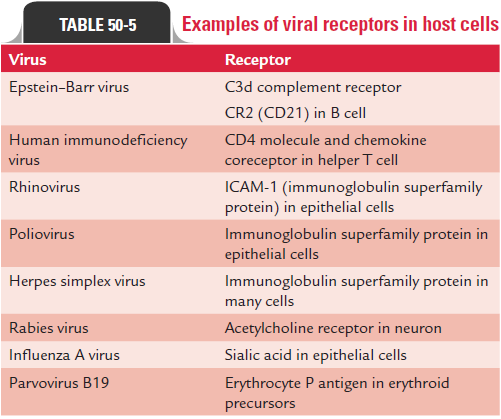 Depending on their nature, whether enveloped or nonenvel-oped, the viruses penetrate into cell by different mechanisms:

·           A nonenveloped virus enters the cell by a process known as endocytosis. The endocytosis is an active process by which nutrients and other molecules are brought into a cell. This process is also known as viropexis.

·           The enveloped viruses enter the cell by an alternate method called fusion, in which the viral envelope fuses with the plasma membrane and releases the capsid into the cell cyto-plasm. Human immunodeficiency virus (HIV) is a classical example of an enveloped virus, which enters the host cell by this method.

Uncoating is the process of separation of viral nucleic acid from its protein core. This process apparently varies depending on the nature of the virus causing infection:

·           With most viruses, the uncoating is accomplished by the action of lysosomal enzymes present inside the phagocytic vacuoles and Golgi vesicles of the host cell. These lysosomal enzymes degrade the protein of the viral capsid.

·            In some other viruses, uncoating is caused exclusively by enzymes present in the host cell cytoplasm. In case of poxvirus, the uncoating is effected by the action of a specific enzyme encoded by the viral DNA, which is synthesized soon after infection.

The sites of viral synthesis depend on the type of virus, whether RNA virus or DNA virus.

DNA viruses replicate their DNA in the nucleus of the host cell by using viral enzymes. However, they synthesize their capsid and other proteins in the cytoplasm by using host cell enzymes. Subsequently, the proteins enter into the nucleus and assem-ble with the newly synthesized DNA to form virions, and then these virions are transported along with endoplasmic reticu-lum to the membrane of the host cell for release. Most of the DNA viruses (herpesvirus, papovavirus, adenovirus, and hepad-navirus) synthesize their nucleic acid in the host cell nucleus. Poxvirus is an exception, because all of its components are synthesized in the cytoplasm.

The RNA viruses multiply in the cytoplasm of the host cell. The major differences among the multiplication process of various RNA viruses lie in how mRNA and viral RNA are produced, as follows:

·           In Reoviruses, the double-stranded RNA is transcribed to mRNA by viral polymerase.

·           Single-stranded RNA viruses are classified into two catego-ries, depending on the method of mRNA transcription. In positive strand (1 strand, positive sense) RNA virus, the viral RNA itself acts as the mRNA. The viral RNA is trans-lated directly into viral proteins in host cell cytoplasm. In the negative strand (2sense) RNA viruses, the RNA is anti-sense, with polarity opposite to that of mRNA. They pos-sess their own RNA polymerase for transcription of mRNA.

·           The single-stranded RNA genome of Retroviridae shows a unique replication. First, the RNA genome is converted into an RNA–DNA hybrid by the viral enzyme reverse transcrip-tase (RNA-directed DNA polymerase). The double-stranded DNA is synthesized from the RNA–DNA hybrid, after which it is integrated into the host cell chromosome. Inte-gration of viral DNA into the host cell may lead to transfor-mation of the cell and development of malignancies.

The assembly of the protein capsid is the first step in viral maturation. The capsids of many enveloped viruses, such as orthomyxoviruses and paramyxoviruses are enclosed by envelopes, which consist of proteins, lipids, and carbohydrates. During maturation, the envelope protein is encoded by the viral genes and is incorporated into the plasma membrane of the infected host cell. In contrast, the envelope lipids and carbohydrates are encoded by host cell genes, but not by viral genes, and are present in the plasma membrane. The envelope develops around the capsid by a process called budding.

The assembly of various viral components into virions may take place in the nucleus (e.g., herpesvirus and adenoviruses) or cytoplasm (e.g., picornaviruses and poxviruses).

Release of the completed viruses is the last step in the replica-tion of viruses.

·           In case of animal viruses, the release of progeny virions usually occurs without cell lysis. The host cell is unaffected and goes on dividing to the daughter cells, which continue to release virions. Progeny virions are released into the surrounding environment and may affect new host cells. Budding does not immediately kill the host cell and in some cases the host cell survives.

·           Nonenveloped viruses, however, release through rupture in the host cell plasma membrane. This type of release usually results in the death of the host cell.

Incomplete viruses: Due to defect during assembly of viralcomponents, some of the daughter virions that are produced may not be infective. Example of such incomplete virus is the influenza virus that shows a high hemagglutination titer but with a low infectivity. This is known as von Magnus phenomenon.

Pseudovirions: Pseudovirions are the viruses that occasion-ally enclose host cell nucleic acid instead of viral nucleic acid. These, therefore, are noninfective and lack the capability to replicate.