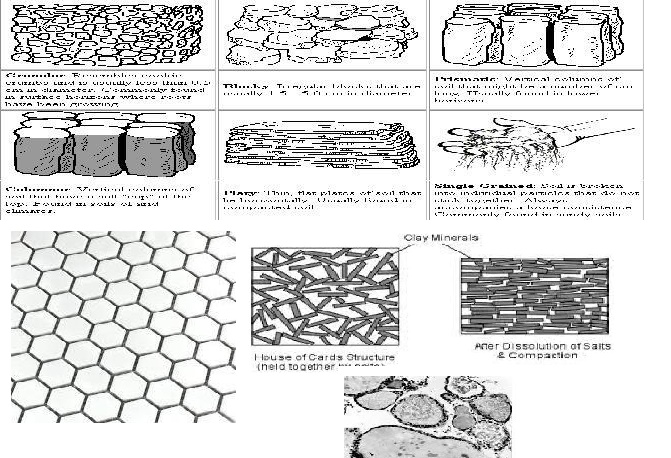 The 'structure' of a soil may be defined as the manner of arrangement and state of aggregation of soil grains. In a broader sense, consideration of mineralogical composition, electrical properties, orientation and shape of soil grains, nature and properties of soil water and the interaction of soil water and soil grains, also may be included in the study of soil structure, which is typical for transported or sediments soils. Structural composition of sedimented soils influences, many of their important engineering properties such as permeability, compressibility and shear strength. Hence, a study of the structure of soils is important.

The following types of structure are commonly studied:

Single-grained structure is characteristic of coarse-grained soils, with a particle size greater than 0.02mm. Gravitational forces predominate the surface forces and hence grain to grain contact results. The deposition may occur in a loose state, with large voids or in a sense state, with less of voids.

This structure can occur only in fine-grained soils, especially in silt and rock flour. Due to the relatively smaller size of grains, besides gravitational forces, inter-particle surface forces also play an important role in the process of settling down. Miniature arches are formed, which bridge over relatively large void spaces. This results in the formation of a honeycomb structure, each cell of a honey-comb being made up of numerous individual soil grains. 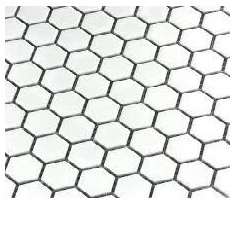 The structure has a large void space and may carry high loads without a significant volume change. The structure can be broken down by external disturbances.

This structure is characteristic of fine-grained soils such as clays. Inter-particle forces play predominant role in the deposition. Mutual repulsion of the particles may be eliminated by

means of an appropriate chemical; this will result in grains coming closer together to form a

'floc'. Formation of flocs is 'flocculation'. But the flocs tend to settle in a honeycomb structure, in which in place of each grain, a floc occurs. Thus, grains grouping around void spaces larger than the grain-size are flocs and flocs grouping around void spaces larger than even the flocs result in the formation of a 'flocculent' structure. Very fine particles or

particles of colloidal size (< 0.001 mm) may be in a flocculated or dispersed state. The flaky particles are oriented edge-to-edge or edge-to-face with respect to one another in the case of a flocculated structure. Flaky particles of clay minerals tend to from a card house structure (Lambe, 1953), when flocculated. When inter-particle repulsive forces are brought back into play either by remoulding or by the transportation process, a more parallel arrangement or reorientation of the particles occurs, as shown in Fig. This means more face-to-face contacts occur for the flaky particles when these are in a dispersed state. In practice, mixed structures occur, especially in typical marine soils.