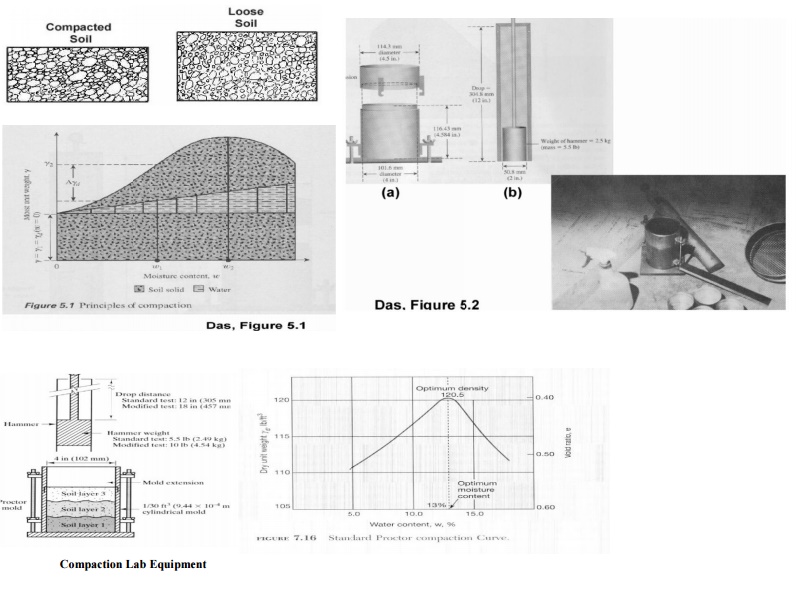 Ř Increasing the stability of slopes.

Compaction is one kind of densification that is realized by rearrangement of soil particles without outflow of water. It is realized by application of mechanic energy. It does not involve fluid flow, but with moisture changing altering.

It is a gradual process of reduction of Volume under sustained, static loading.

It causes a reduction in volume of a saturated soil due to squeezing out of water from the soil.

It is a rapid of reduction of volume mechanical mean such as rolling , tamping , vibration.

In compaction, the volume of partially saturated soil decreases of air the voids at the unaltered water content

Is an artificial process which is done to increase the density of the soil to improve its properties before it is put to any use.

There are 4 control factors affecting the extent of compaction:

3 Effect of Water on Compaction

In soils, compaction is a funnction of water content

Ř  Consider 0% moistu re - Only compact so much

The dry unit weight (?d) inccreases as the moisture content increases to a point 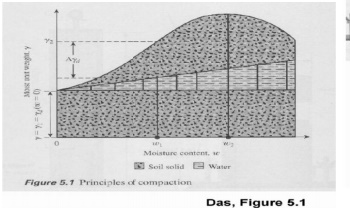 Compaction Effort is calc ulated with the following parameters 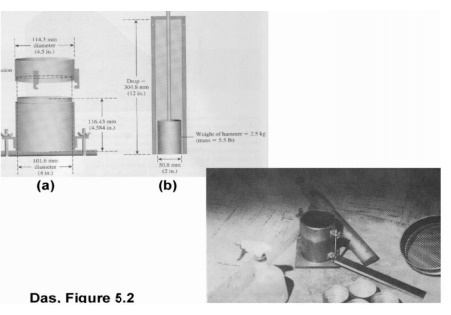 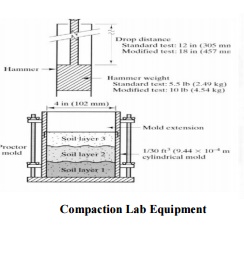 2.   Record the weight of the Proctor mold without the base and the (c ollar) extension, the volume of which is 1/30 ft3.

4.   Place the soil in the mold in 3 layers and compact using 25 well dist ributed blows of the Proctor hammer.

5.  Detach the collar without disturbing the soil inside the mold

6.  Remove the base and determine the weight of the mold and compacte d soil.

7.   Remove the compacted soil from the mold and take a sample (20-30 grams) of soil and find the moisture content

Place the remainder of th e molded soil into the pan, break it down, and thoroughly remix it with the other soil, plus 100 additional grams of water. 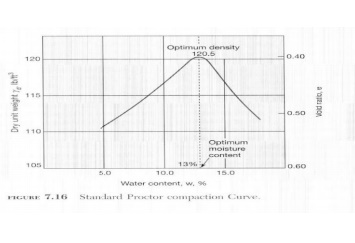 At certain water content, w hat is the unit weight to let no air in the voids

It is clear that in the above equation, specific gravity of the solid and thewater density are constant, the zero-air-void density is inversely proportional to water content w. For a given soil and water content the best possible compaction is represented by the zero-air-voids curve. The actual compaction curve will always be below. For dry soils the unit weight increases as water is added to the soil because the water lubricates t he particles making compaction easier. As moree water is added and the water content is larg er than the optimum value, the void spaces be come filled with water so further compac tion is not possible because water is a kind like incompressible fluid. This is illustrated by t he shape of the zero-air-voids curve which decre ases as water content increases. 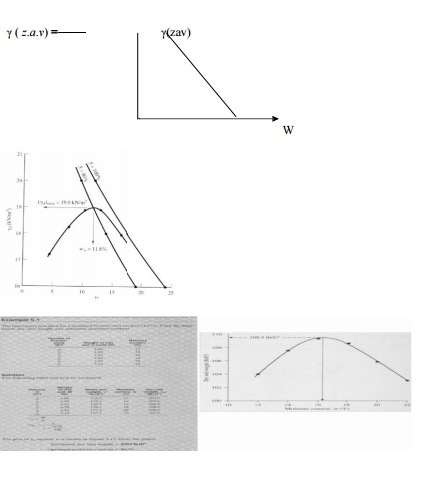 5 Effect of Compacti on Energy

As the compaction effort increases,

6 Compaction adopte d in the field

A hand operated tamper consists of block iron, about 3 to 5 Kg mass, a ttached to a wooden rod. The tamper is lifted for about 0.30m and dropped on the soil to be compressed. Mechanical Tampers operatted by compressed air or gasoline power.

Smooth - wheel rollers ar e useful finishing operations after compaction of fillers and for compacting granular base causes of highways.

Pneumatic - tyred rollers u se compressed air to develop the required in flation pressure.The roller compactive the soil primarily by kneading action. These rolle srs are effecting for compacting cohesive as we ll as cohesion less soils.

The sheep - foot roller con sists of a hollow drum with a large number of small projections (known as feet) on its surf ace. The drums are mounted on a steel frame. The drum can fill with water or ballast incre ases the mass. The contact pressure is gener ally between 700 to 4200 KN/m2.