Anatomy of the Adrenal Cortex

The mammalian adrenal cortex is divided into three concentric zones: the zona glomerulosa, zona fascicu-lata, and zona reticularis. The zona glomerulosa pro-duces hormones, such as aldosterone, that are responsible for regulating salt and water metabolism; the zona fasciculata produces glucocorticoids; and the zona retic-ularis produces adrenal androgens. While secretion by the two inner zones is controlled by pituitary adreno-corticotropic hormone (corticotrophin, ACTH), aldos-terone produced by the zona glomerulosa is principally controlled by the renin–angiotensin system. Desoxy-corticosterone, a mineralocorticoid produced in the zona fasciculata, is under corticotrophin control.

Cholesterol is transported into the mitochondria of steroidogenic tissue, where side chain cleavage is car-ried out. In common with other mixed-function oxidase systems, the cholesterol side chain cleavage requires re-duced nicotinamide-adenine dinucleotide phosphate (NADPH), oxygen, and a specific cytochrome P450. The rate-limiting step in steroid biosynthesis is the conversion of cholesterol to pregnenolone (Fig. 60.1). 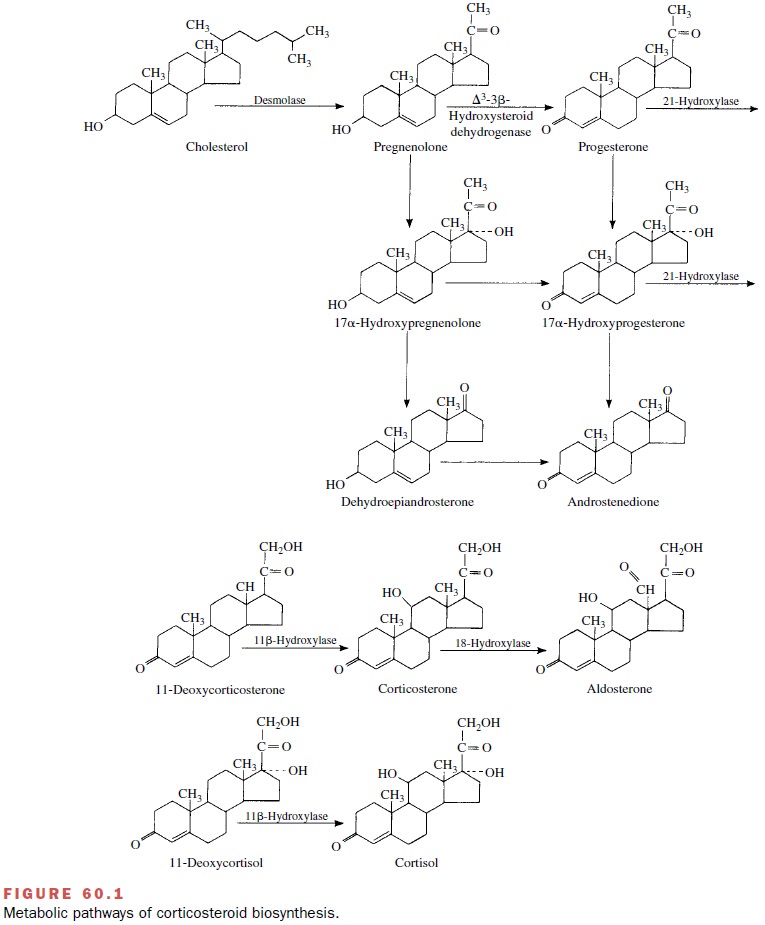 Pregnenolone leaves the mitochondria to become the obligatory precursor of corticosteroids and adrenal androgens. The biosynthetic pathway next branches into two separate routes. One route passes through proges-terone and corticosterone to aldosterone, and the other proceeds from 17 -hydroxyprogesterone and 1-deoxy-cortisol to yield cortisol.

Thus, steroid intermediates are converted to steroid end products by sequential 17-, 21-, and 11-hydroxylation reactions. 11- -Hydroxylation is essential for glucocorticoid and mineralocorticoid activ-ity of a steroid. The steroid hydroxylase system has the characteristics of a mixed-function oxidase, since two substrates, steroid and NADPH, are oxidized. All hy-droxylases seem to be associated with a specific cy-tochrome P450.

The 17- and 21-hydroxylase enzymes are associated with microsomes, whereas the 11- -hydroxylase has a mitochondrial origin. Since the last-named enzyme is not detectable in other steroid-producing tissues, the term 11-oxygenated steroids is considered synonymous with adrenal steroids. Aldosterone synthesis involves an essential 18-hydroxylation step catalyzed by P450c18 with corticosterone as the precursor; this reaction also takes place within the mitochondria.

Glucocorticoids secreted into the systemic circulation are reversibly bound to a specific -globulin known as transcortin or corticosteroid-binding globulin. This bind-ing system has a high affinity and low capacity for corti-costeroids, which contrasts with the low-affinity binding of these compounds to plasma albumin. Approximately 80% of the normal cortisol content in human plasma (12 g/dL) is bound to corticosteroid-binding globulin, while 10% is bound to serum albumin; the remaining 10% is the biologically active unbound hormone.

Transcortin acts as a reservoir from which a constant supply of unbound cortisol may be provided to target cells. In addition, when serum albumin levels are low, less circulating cortisol becomes bound, which yields a greater physiological effect. Not only does protein bind-ing control the amount of biologically active cortisol available, but it also reduces the rate at which steroids are cleared from the blood and thus limits steroid sup-pression of corticotrophin release from the pituitary gland.

Most of the cortisol circulating in the blood is metabo-lized before its excretion. The metabolism of adrenal steroids occurs primarily in the liver, and when meta-bolic processes are altered, as occurs in liver disease, the half-life of cortisol may increase from 100 minutes to 7 hours.

Two major steps are involved in the metabolism of cortisol. The first is reduction of double bonds and in-troduction of a hydroxyl group in the A ring to form tetrahydric derivatives; this pathway accounts for 20 to 30% of the cortisol excreted. The glucocorticoid-metabolizing microsomal enzymes 11 -hydroxysteroid dehydrogenases (11 β-HSD) play a crucial role in deter-mining the availability of glucocorticoids. 11 β-HSD-1 acts as a reductase, regenerating active glucocorticoids, whereas 11 β-HSD-2 acts as a dehydrogenase, convert-ing cortisol to its inactive 11-keto derivative (cortisone). By inactivating glucocorticoids, 11 β-HSD-2 protects the mineralocorticoid receptor from occupation by gluco-corticoids, thereby endowing specificity to the aldo-sterone regulatory effects despite the predominance of glucocorticoids in the circulation. By contrast, congeni-tal deficiency of 11 β-HSD-2 results in inappropriate ac-tivation of the mineralocorticoid receptor by cortisol, leading to hypertension and hypokalemia. The second step in the metabolism of cortisol is a glucuronic acid or sulfate conjugation to form more soluble derivatives that are poorly bound to plasma proteins and readily pass into the urine. Adrenal androgens also are ex-creted, primarily as sulfates; they constitute about two-thirds of the total urinary 17-ketosteroids excreted. In the male, the other third is contributed by gonadal se-cretions. Knowledge of corticosteroid metabolism is im-portant to the clinician, since alterations in adrenocorti-cal function can be determined by measuring the amounts of 17-hydroxycorticosteroids. However, ra-dioimmunoassay of urinary free cortisol (and plasma cortisol) is supplanting measurements of urinary metabolites.

Since the metabolism of steroid hormones occurs in part through the action of the hepatic oxidative drug-metabolizing enzymes, concomitant administration of anticonvulsant drugs (e.g., phenytoin and carbamaze-pine), which are potent inducers of glucocorticoid me-tabolism, will augment the elimination of methylpred-nisolone severalfold. Also, since steroids such as prednisone lack glucocorticoid activity until converted to prednisolone by hepatic enzymes, patients with liver disease should be treated with prednisolone rather than prednisone.