Actions of the Corticosteroids

The pharmacological actions of steroids are generally an extension of their physiological effects.

ACTIONS OF THE CORTICOSTEROIDS

The pharmacological actions of steroids are generally an extension of their physiological effects. Adrenal cor-ticosteroids exert effects on almost every organ in the body. In normal physiological concentrations, they are essential for homeostasis, for coping with stress, and for the very maintenance of life.

The glucocorticoids increase blood glucose and liver glycogen levels by stimulating gluconeogenesis. The source of this augmented carbohydrate production is protein, and the protein catabolic actions of the gluco-corticoids result in a negative nitrogen balance. The in-hibition of protein synthesis by glucocorticoids brings about a transfer of amino acids from muscle and bone to liver, where amino acids are converted to glucose.

Supraphysiological concentrations of glucocorti-coids will induce the synthesis of specific proteins in various tissues. For instance, glucocorticoids stimulate the synthesis of enzymes involved in glucose and amino acid metabolism, including glucose 6-phosphatase and tyrosine transaminase. The relation of this action of glu-cocorticoids to their overall effects on general meta-bolic processes remains obscure, although the latency of their therapeutic actions (several hours) is consistent with the fact that steroids regulate RNA and protein synthesis.

Glucocorticoids not only break down protein but also stimulate the catabolism of lipids in adipose tissue and enhance the actions of other lipolytic agents. This occurrence results in an increase in plasma free fatty acids and an enhanced tendency to ketosis. The mecha-nism of this lipolytic action is unknown. The net effect of the biochemical changes induced by the glucocorti-coids is antagonism of the actions of insulin. These bio-chemical events promote hyperglycemia and glycosuria, which are similar to the diabetic state.

Another major function of the adrenal cortex is the reg-ulation of water and electrolyte metabolism. The princi-pal mineralocorticoid, aldosterone, can increase the rate of sodium reabsorption and potassium excretion sever-alfold. This will occur physiologically in response to sodium or volume depletion or both. The primary site of this effect is the distal tubule . The steroid-binding specificity of mineralocorticoid and glu-cocorticoid receptors overlaps in the distal cortical cells and collecting tubules, so that glucocorticoids may medi-ate mineralocorticoid-like effects. Glucocorticoids also decrease the intestinal transport of calcium by antago-nizing the action of 1,25-dihydroxyvitamin D3 and pro-mote calcium excretion by the kidney .

The inflammatory response is a highly complex process that involves a number of cell types of the reticuloen-dothelial system and a number of chemical mediators, including prostaglandins, leukotrienes, kinins, and bio-genic amines . The inhibitory effects of glucocorticoids on various aspects of the inflammatory and immunological responses constitute the basis for their therapeutic efficacy. All steps of the inflammatory process are blocked: there is a diminution in heat, ery-thema, swelling, and tenderness. Both the early compo-nents (edema, fibrin deposition, neutrophil migration, and phagocytosis) and late components (collagen syn-thesis and deposition) may be retarded.

Glucocorticoids promote apoptosis and reduce survival, differentiation, and proliferation of a variety of inflammatory cells, including T lymphocytes and macrophages. These effects are mediated by changes in the production and activity of inflammatory cytokines, such as interleukin (IL) 6 and IL-β , tumor necrosis fac-tor- , and interferon-γ . Many of the antiinflammatory actions of glucocorticoids are mediated by cross-talk between the activated glucocorticoid receptor and tran-scription factors, such as the proinflammatory nuclear factor-κ -B (NF- κ B) and activator protein (AP) 1. These transcription factors, which promote the expression of a number of inflammatory genes, are potential targets for antiinflammatory therapy as observed in asthma, for example.

A prominent histological feature of glucocorticoid action on the late-phase response to bronchial inhala-tion challenge with antigen is inhibition of the influx of polymorphonuclear leukocytes, eosinophils, basophils, mononuclear cells, and lymphocytes into tissues (Fig. 60.2). The ability of glucocorticoids to alter reticuloen-dothelial cell traffic, which is a prominent antiinflamma-tory action of glucocorticoids, is regulated by adhesion molecules. Glucocorticoids reduce the expression of ad-hesion molecules through the inhibition of proinflammatory cytokines and by direct inhibitory effects on the expression of adhesion molecules. Chemotactic cy-tokines, such as IL-8, which attract immune cells to the inflammatory site, are also inhibited by glucocorticoids. In addition to their ability to inhibit the adherence of inflammatory cells, particularly neutrophils, to the vas-cular endothelium, steroids are vasoconstrictors. This action would further impede inflammatory cell migra-tion into tissues.

As mentioned previously, glucocorticoids promote apoptosis and reduce survival, differentiation, and pro-liferation of a number of inflammatory cells. While there is an increase in the number of polymorphonu-clear leukocytes in the circulation, corticosteroids cause the involution and atrophy of all lymphoid tissue and decrease the number of circulating lymphocytes. The striking lymphocytopenia is caused in large part by an inhibition of lymphocyte proliferation, although dimin-ished growth with preferential accumulation of cells in the G1-phase of the cell cycle is followed by cell death. These effects are mainly mediated by alterations in cy-tokine production and action. 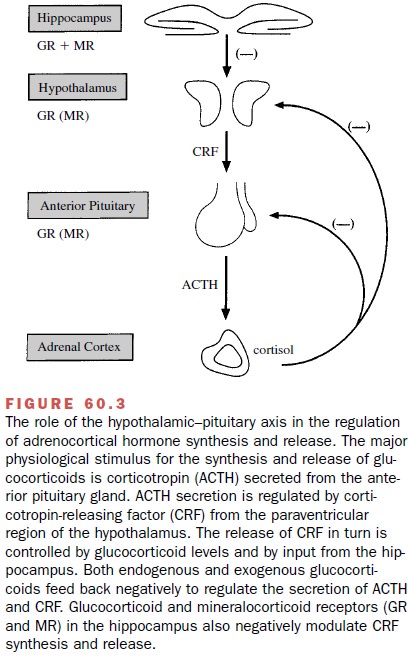 In addition to the humoral control of corticotrophin release, direct nervous control is mediated through the median eminence of the hypothalamus (Fig. 60.3). Nerve terminals in the median eminence store and re-lease various hormones and neurotransmitters, includ-ing corticotropin-releasing factor (CRF), which is under the control of higher neural centers. During stress, CRF is released into the pituitary portal system to stimulate corticotrophin release. Activation of the hypothala-mic–pituitary system also accounts for the diurnal, or circadian, nature of cortisol secretion; plasma cortisol concentrations reach a maximum between 6 and 8 A.M. and then slowly decrease through the afternoon and evening. Human and animal studies suggest the exis-tence of an early (fast) and more prolonged (delayed, > 2 hours) feedback of corticotrophin suppression.

Both inhibitory systems are operative at the hypothalamic and pituitary levels. The hippocampus also highly ex-presses glucocorticoid and mineralocorticoid receptors, which when activated, decrease the synthesis and re-lease of CRF. This results in a decrease in basal and corticotrophin-induced cortisol secretion (Fig. 60.3).

Corticosteroids also affect adrenomedullary func-tion by increasing epinephrine production; the mecha-nism is exertion of a stimulatory action on two of the enzymes that regulate catecholamine synthesis, tyrosine hydroxylase, the rate-limiting enzyme, and phenyl-ethanolamine N-methyltransferase, which catalyzes the conversion of norepinephrine to epinephrine. Steroids also influence the metabolism of circulating cate-cholamines by inhibiting their uptake from the circula-tion by nonneuronal tissues. This effect of corticoids may explain their permissive action in potentiating the hemody-namic effects of circulating catecholamines.

Finally, steroids can exert suppressive actions on cer-tain endocrine systems. Glucocorticoids inhibit thyroid-stimulating hormone pulsatility and the nocturnal surge of this hormone by depressing thyrotropin-releasing hormone secretion at the hypothalamic level. In addi-tion to hypercortisolism being associated with insulin resistance, glucocorticoids are inhibitors of linear growth and skeletal maturation in humans. A pivotal component of this inhibition is the depression of growth hormone secretion. The anticalcemic effect of the glu-cocorticoids, which is associated with an amplification of the actions of parathyroid hormone, also may retard bone growth. The inhibitory action of high levels of glu-cocorticoids on reproductive function is probably be-cause of attenuation of luteinizing hormone secretion and direct action on the reproductive organs.